Modelling: The power of long memory 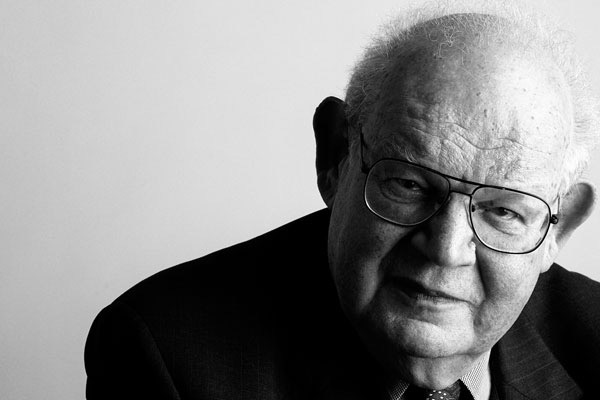 Louis Bachelier is commonly known as the father of financial mathematics. In 1900 he came up with the idea of modelling stock prices using a random walk process or Brownian motion. Bachelier used this model to calculate the price of a barrier option 73 years before the famous Black Scholes option pricing formula.

Brownian motion is an elegant representation of the stock market and the mathematics is well understood. However, the assumptions used to make Brownian motion work for stock returns are unrealistic to say the least. One of the most notorious of these assumptions is that successive stock market returns (log returns, generally) are independent and normally distributed. The stock market is thus assumed to have no memory, suggesting that a sharp decline one day will have no impact on stock market behaviour the following day. This is obviously wrong.

An important implication of this memoryless property is that stock market data can be scaled. Thus we can scale daily or monthly data characteristics to generate annual projections. This leads us to the ubiquitous 'square root of time' rule for scaling volatility. The argument implies that we can build 'reliable' estimates of return and volatility of annual returns by scaling up monthly, weekly or even daily data.

It wasn't until the pioneering work of Benoit Mandelbrot in the 1960s that people accepted that stock returns are not normally distributed and that stock markets and most asset return processes are not memoryless.

When it comes to the standard short-term memory models, they are not quite good enough at explaining the dependence in asset returns. Take volatility clustering in asset returns - a feature that is widely seen even in developed stock market indices. This volatility structure indicates that asset returns are not independent. The absence of linear autocorrelations, as is the case for most developed markets, implies that the dependence must also be non-linear (see Figure 1). However, there is a debate as to whether this non-linear dependence is short- or long-term. Mandelbrot suggested that this non-linear dependence is long-term, but others have shown that it is short-term (Lo, 1991). Figure 2 shows how a stock price with long-term memory may appear. Nevertheless, hyperbolic autocorrelations seem to imply some long-term dependence. Standard generalised autoregressive conditional heteroskedasticity (GARCH) models have exponential decay, and the general belief has been that these are unable to explain hyperbolic long-term decay when modelling absolute returns for instance (Maheu, 2002). 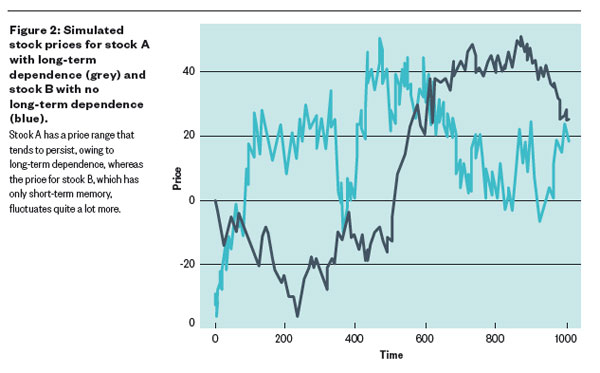 The intuition for long-term dependence came in the 1950s from the work of the British physicist Harold E Hurst, also known as Abu Nile or father of the Nile to the Egyptians. Hurst was asked to design a reservoir on the Nile so the dams could protect the Egyptians in time of flood and the reservoirs could be used in times of drought. Instead of assuming random and independent water discharge, as was common among hydrologists at the time, Hurst decided to study the Nile's flooding pattern by studying ancient records of the river dating back to the time of the Pharaohs.

Hurst found that the flooding patterns were neither random nor independent. They displayed a pattern where periods of high (low) discharges were followed by years of low (high) discharges - not dissimilar to the story of Joseph in the Old Testament and the Koran, when Egyptians were faced with seven years of plenty followed by seven years of drought. Hurst found that the standard econometric short-term memory models at the time did not provide a good fit to the 'Joseph effect' in the data. He eventually came up with the concept of long-term memory to explain these patterns. Hurst observed similar long-term memory in many other natural phenomena, such as the pattern followed by solar spots in our sun.

In the 1960s, Mandelbrot was teaching economics at Harvard and studying cotton prices. He also observed the presence of long-term dependence, similar to the pattern Hurst found in the Nile flooding. The connection was thus made to finance and Mandelbrot explained that times of market exuberance were like floods, while times of market depression resembled droughts. He found the standard short-term dependence econometric models cannot explain the persistence of these periods of exuberance and depression attributed to the decay process.

So what are the implications for non-linear dependence in asset returns? They are profound. All the concepts in 'orthodox' finance are wrong if there is any form of dependence, whether it is linear or non-linear, short or long. For example, the Efficient Market Hypothesis, the Capital Asset Pricing Model (which derives all its assumptions from the Markowitz mean variance model) and the Black Scholes model are all invalid. Of course, this is not such a massive shock to the system now as it was when Mandelbrot first proposed these ideas.

This article appeared in our February 2013 issue of The Actuary.
Click here to view this issue
Filed in
02
Topics
Investment