Local solution to a national problem

Disillusioned by bankers bonuses? Dr William Scott and Ruth Penny take a closer look at the UKs only independent savings bank and find a model that the rest of the banking system would do well to learn from 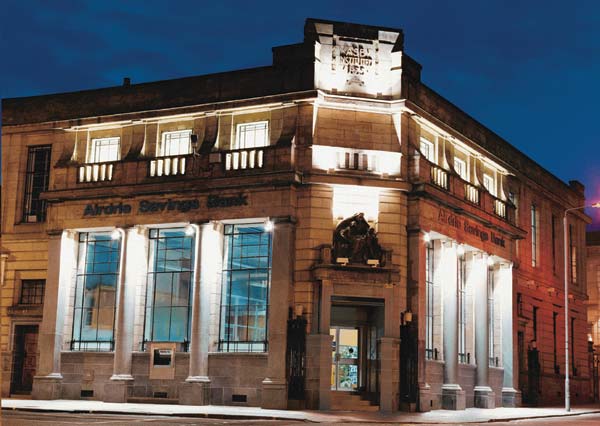 At the core of the savings bank movement, which began in the early 19th century, was the idea of enabling the industrious to save and safeguard their money. The first savings bank, the Ruthwell Parish Bank, was opened by the Reverend Dr Henry Duncan of Dumfriesshire in 1810 [1].

In 1817, acts were passed in England and Ireland requiring savings banks to deposit their funds with the National Debt Commissioners. But Duncan and his allies felt that diverting funds from the local area went against the principles of the savings bank movement, and they opposed the extension of the acts to Scotland.

Duncan was invited to suggest his own bill and the result was the 1819 Act, known as the Scottish Savings Bank Charter. Airdrie Savings Bank (ASB) and a number of others were certified under this Act, while several others adopted the English system. From 1836 onwards, new Scottish savings banks were required to adopt the English system [1].

ASB was established in January 1835 and began its expansion into the rest of North Lanarkshire in 1916. By the early 1970s, it had seven branches and was one of five 1819 Act savings banks.

During the 1970s and 1980s, the bank's existence was threatened and it had to fight off mergers with Trustee Savings Bank groups and prove it was worthy of a banking licence. Of the other four 1819 Act savings banks, two were taken over by the Royal Bank of Scotland and two gave in to the TSB embrace. ASB managed to survive and become the UK's only independent savings bank [2]. Today, ASB has eight branches.


Running the bank for free

ASB is unique in that its managers report to an independent board of trustees, who oversee the running of the bank but receive no remuneration. The board is made up of local business people, invited to join because of their keen interest in the community. The current board includes a former Lord Lieutenant, an actuary, a lawyer, two chartered accountants and two Justices of the Peace.

The trustees ensure that there are appropriate processes in place to monitor and assess the risks that the bank faces. As the bank does not pay individual bonuses, staff are not target-driven and therefore the depositors' best interests are the primary focus. The bank is a popular choice for customers who are disheartened by the staggering bonuses that some other bankers receive.

ASB operates a prudent, risk-averse policy. It does not have to pay dividends to shareholders or interest to bondholders, and profits are reinvested in the bank.

This approach has produced stability throughout the bank's history, even in the aftermath of the 2007 financial crisis. The bank's 2011 report and accounts (available at www.airdriesavingsbank.net) show that, at the end of the last financial year, the bank had liabilities of £138.285m (of which £137.552m was customers' deposits) and total assets of £153.571m, placed as follows:

> Deposits in other banks - restricted to £15m per bank, which must have an AA rating.

The bank's 2012 Pillar 3 disclosures, which are required under Basel II, show that it had a minimum capital requirement of £4.590m against actual capital of £15.286m. The Tier 2 capital, which is a provision for bad and doubtful debts, was £0.576m.

The bank's policy in lending to its customers is also risk-averse and it is proud of the low number of bad debts. At the end of the 2011 financial year, it had £49.128m as advances to customers. It provides only a few hundred business and personal loans, fewer than a hundred mortgages and a small number of bridging loans at any one time.

The bank's lending is subdivided into development, investment residential, investment commercial, mortgages, bridging loans, and other. It follows strict guidelines on how much it lends in each category to ensure that the lending book is not concentrated in one sector.

Furthermore, as a mortgage provider, it lends a maximum of 90% of the lower of the property price and its valuation. ASB prefers the first and only charge over property as security, and any property that is granted to ASB as security must be insured.

The bank does not lend money outside the UK (and most of its lending is within Scotland). It therefore has had no direct exposure to the eurozone crisis.

ASB was not a direct casualty of the 2007 financial crisis, but it inevitably feels any downturns in the UK economy. For instance, it has been affected by the dramatic increase in financial regulations post-crisis.

ASB must ensure that the new procedures are followed, which is expensive and increases staff workload. On the other hand, deposits have increased: modern methods of banking mean that depositors may be attracted from outside the bank's local area.

It is also feeling the effect of low interest rates. Although its focus is to help customers save, it is currently unable to offer attractive savings rates. It is also unable to make large profits from its gilts, customer advances and deposits in other banks, but can offer security.

The bank was set up to help local people and it continues to provide a personal service, with managers in every branch. It refuses to sell unnecessary products. It encourages thrift through its School Savings Scheme (established in 1924) and staff visit nursing homes to provide banking for elderly clients.

ASB is also involved in its communities in other ways, including an anti-doorstep-fraud initiative with Strathclyde Police. Four apprentices were hired by the bank this year as part of the 'North Lanarkshire's Working' scheme.

The bank has moved with the times to provide its customers with loans, chip-and-pin cards, online and basic telephone banking. This means its customer base is expanding to a wider area of Scotland - and into England.

In 2010, several prominent Scottish business people made large deposits with ASB to help it to expand and increase lending to local businesses. The opening of the Falkirk branch was a direct result.

Since its establishment, Airdrie Savings Bank has been of great benefit to residents. It continues to look after its customers, provide a friendly service, and has adapted steadily to the needs of modern depositors. If every part of Britain had such an institution, the public might not feel so let down by some aspects of the British banking system.

This article appeared in our December 2012 issue of The Actuary.
Click here to view this issue
Filed in
12
Topics
Risk & ERM