Buried in the data of the 2011 Census is the discovery that there are now fewer elderly people than was previously estimated. The census data showed that there were 30,000 fewer people aged in their 90s than expected. This represents a reduction of around 15%, so what has happened to our 'missing' 90-year-olds? 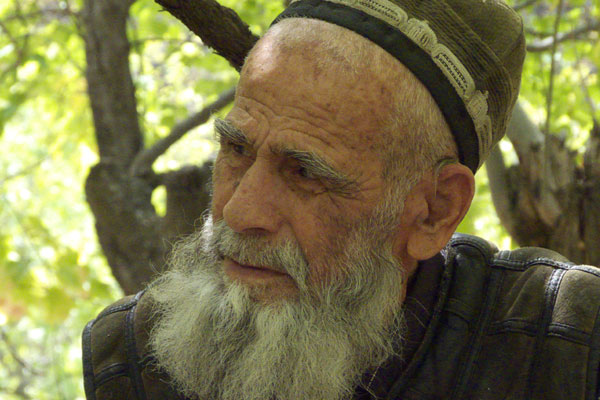 When the first results from the 2011 Census were published in July, press coverage focused on the fact that the population of England and Wales was much higher than previously thought. In fact the revised population estimate for England and Wales based was just under 0.5 million higher than the previous figure. The media reports concentrated on this greater than expected population growth and the causes of the unexpected growth, largely migration.

However, buried in the data is the discovery that there are now fewer elderly people than were previously estimated. The census data showed that there were 30,000 fewer people aged in their 90s than expected. In absolute terms this might not sound many; however in relative terms it represents a reduction of around 15%. This article explores why actuaries - particularly those with an interest in longevity - should be interested in our "missing" 90-year-olds.

In the UK most actuarial work on longevity improvements has used population data published by the Office for National Statistics (ONS) as its primary source. The projection model developed by the Continuous Mortality Investigation (CMI) is re-calibrated each year using ONS data.

There is a good reason for this. Population-level statistics provide actuaries with large, credible datasets that are reasonably stable over time.

There are, however, a number of features that users of this data should be aware of. As most actuaries will know, mortality rates are calculated by dividing death numbers by population counts. In ONS datasets the population counts are estimates derived by rolling-forward equivalent population numbers from the last census. This is done by subtracting an appropriate number of deaths from each birth cohort and adjusting for the number of migrants.

As the census is conducted once every 10 years, the estimates following a census year tend to become increasingly subject to error with time, and past values are often revised following the publication of new results.

The recent publication of the first release of results from the 2011 Census has proved an interesting example of how this can work out in practice.

How the population variances differ with age

Figure 1 gives the population increase by age group as a percentage change between the population estimates before and after publication of the 2011 Census results.[1]

The most striking feature of the data is the significant downward revisions in population estimates at ages of 90 and over, especially for males aged 90-99 and females aged 100+. 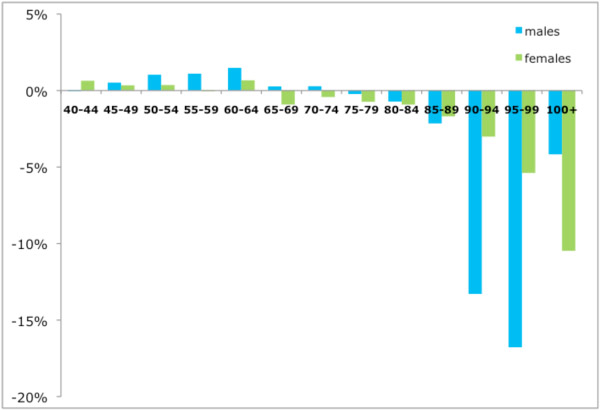 The most obvious implication is that mortality rates for the population of England & Wales at ages above 90 will be higher than previously thought. This means that life expectancy at age 65 should be slightly lower.

A further implication of the apparent understatement of mortality rates at high ages is that the recent pace of improvement, in high age mortality rates, will have been over-stated.

Figure 2 shows average annual rates of improvement for males over the period 2001-2011 calculated in two ways:-

1.    With improvements based on mortality rates for 2011 derived using actual deaths for 2011 and mid-year populations taken from the latest '2010-based' ONS projection.

In both cases it has been assumed that the population estimates for 2001, and hence mortality rates for that year, are correct for all age groups. In practice this may not be the case. However, leaving this point aside, the striking feature shown by figure 2 is that the 2011 Census results suggest that recent rates of improvement may have been far lower at high ages than previously thought. Notably for males aged in their 90s, the pace of change may have been less than half as rapid.

It is likely that updated population estimates produced using the 2011 Census will result in slightly lower life expectancies (at age 65). It is also probable that projections of the population reaching high ages, e.g. projected numbers of centenarians or the likelihood of reaching age 100, may be more materially affected.

The precise impact is likely to be relatively small, but will not be known for sure until 2011 mid-year estimates are published by the ONS in September and revisions to 2002-2010 population estimates are released later in the year.

In the meantime the CMI has recently announced its intention to postpone the release of its projection model until 2013 to await the final outcome of the revisions.

More generally, the publication of initial results from the 2011 Census:

Another, more general, implication of the apparent revision needed to improvement rates at high ages, is to alter our perception of how improvement rates might vary by age in the future. Recent data appeared to indicate very high rates of change at advanced ages; providing a challenge for models which implicitly assume less rapid rates of change beyond certain ages (e.g. the CMI Core Projection model beyond age 90). The revised population estimates suggest there may be less evidence for this challenge.

Those concerned in the analysis of longevity risk should await further publications from the ONS with interest.

[1] Percentage increases in population estimates were derived by comparing population estimates, by age group and gender, as at 27 March 2011. Specifically, values based on the 2011 Census, published by the ONS on 16 July 2012, were compared with equivalent values derived using the ONS 2010-based population projections. For simplicity linear interpolation was used to derive estimates for 27 March 2011 using the appropriate 2010-based mid-year estimates for 2010 and 2011.

Richard Willets is Director of Longevity at Friends Life and is recognised as one of the leading experts on annuitant longevity in the UK. He has published widely in the field and is regular speaker at conferences in the UK and overseas.  Richard previously held senior roles at Prudential, PAFS (now Partnership Assurance) and Paternoster. His consultancy firm has also advised most of the major annuity writers in the UK on longevity matters. Richard chaired the working party of the UK Actuarial Profession which developed the mortality projection model now widely used throughout the life assurance and pensions industries.

"Has anyone told George Osborne?"


Could the problem be more about mis-statements of age? If older census completers are inclined to understate their age then the population at high ages could go 'missing'. Overall, of course this could mean that death rates in the 80s, say, are understated whilst those in the 90s become overstated. Without misstatements, and assuming that correct ages at are recorded at death, where esle could the 'missing persons' have gone? Emigration is unlikley at these ages...

This article appeared in our November 2012 issue of The Actuary.
Click here to view this issue
Filed in:
11
Topics:
Life insurance