Coronary heart disease (CHD) is the UK's biggest killer, resulting in two in five of all deaths, or 74,000 deaths in England in 2007. A third of these deaths occur between the ages of 75 and 84, with the remainder distributed fairly equally on either side of this peak. Age-adjusted CHD death rates have fallen by about 66% since 1981, which is estimated to have contributed about half of the increase in adult life expectancy in England over the latter half of the 20th century.

Previous research by Unal B, Critchley J, Capewell S, 2004 (circ.ahajournals.org/content/109/9/1101.full) examined the fall in CHD mortality between 1981-2000 and concluded that half of the fall was attributable to the net effect of lifestyle changes, with the uptake of new medical therapies for CHD (like statins and coronary artery-bypass graft) explaining another 40%. The remaining 10% was unexplained.

These findings were replicated across a range of countries, including the US, New Zealand, Canada and Scandinavia, indicating that healthier behaviours played a more prominent role than better treatment. A decline in smoking was the single largest contributory factor (approximately 36%) to the overall fall in England and Wales.

But in the mid-1990s, after falling continuously from the 1970s, the prevalence of smoking began to level off. At the same time, adverse risk factors such as diabetes and high body mass index (BMI) increased relentlessly, especially in deprived areas. Emerging evidence suggested that CHD mortality rates in young people under 45 were flattening or even reversing. And there were few new therapeutic breakthroughs.

Surprisingly, though, CHD mortality rates continued to fall. In fact, the pace of decline accelerated from 2000 onwards. More than half of mortality improvement came between 2000 and 2007, with age-standardised death rates falling at 6% per annum, as opposed to 3% per annum in the previous two decades.

During these seven years, CHD mortality improved across all ages and across all sub-populations, ranked by residential deprivation into quintiles, with quintile 1 being least deprived (see Figure 1). However, the pace of fall was faster in more affluent than deprived areas. The resulting widening in relative inequalities in the first decade of the 21st century has been observed not only for CHD but for total mortality in the UK and other European countries. 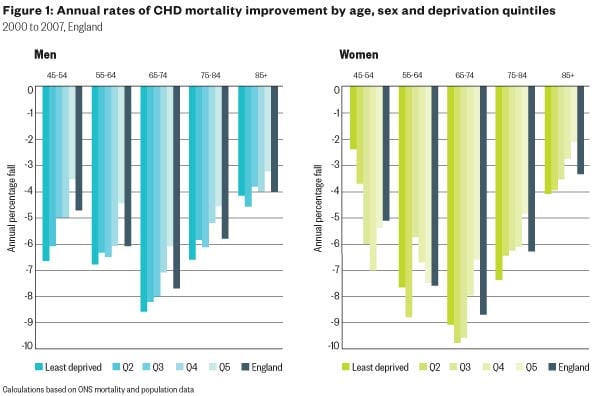 So why was CHD mortality declining so rapidly, and were residents in deprived areas falling behind because of slower adoption of healthy lifestyles or poorer access to modern treatments - or both?

To answer this question, a collaboration of clinical and social epidemiologists modelled the impact of change in seven of the major risk factors for CHD: smoking, systolic blood pressure, total cholesterol, body mass index (BMI), diabetes, physical inactivity, and fruit and vegetable consumption between 2000 and 2007, plus all 45 medical and surgical treatments currently in use in nine patient groups. Our model included the total population of England aged 25 and over in 2000 and 2007, segmented by sex, seven age bands and deprivation quintiles.

We found that after 2000, the relative contribution of medical therapies versus risk factors had swapped over: modern treatments contributed 52% of the mortality improvement, while the net change in risk factors contributed 33% (see Figure 2). Although smoking rates started to drop again from 2001 onwards, the pace of decline was not as dramatic as in previous decades. Compared with the significant falls seen in population blood pressure, stopping smoking made a relatively small contribution. Interestingly, the falls in blood pressure were particularly large in people not taking medication to lower their blood pressure.

However, the benefits of improvements in health behaviours across all social groups were partially negated by sharp rises in body mass index and diabetes, particularly in the most deprived groups. Opposing trends in major risk factors, which varied substantially according to deprivation, meant that their net contribution accounted for just a third of deaths averted overall. In deprived areas, both the positive and the negative changes in risk factors were larger than in the affluent group and together explained about half of the fall. By contrast, risk factors explained only 30% of the fall in affluent areas, with about 20% unexplained by the model.

The contribution of improved treatments was very similar across all socioeconomic groups (about 50%). This finding is consistent with equitable service delivery across the NHS, most likely resulting from the implementation of treatment protocols in hospitals and primary care and from giving GPs an incentive to prevent and manage CHD in the community. The increased contribution of treatments to improvements in CHD mortality resulted largely from the doubling of the uptake of effective drugs prescribed by GPs, such as statins, beta-blockers and ace inhibitors, rather than the introduction of new hospital treatments. 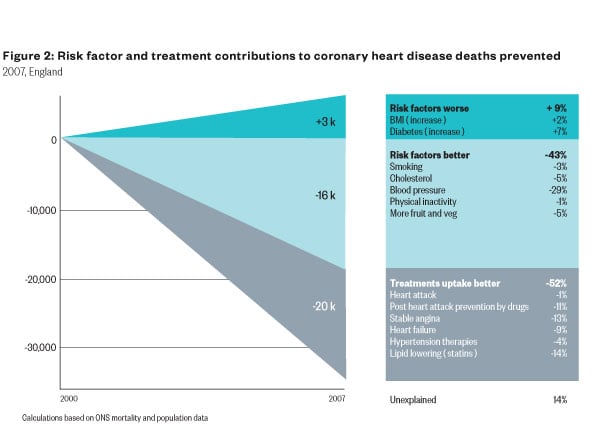 Our findings suggest that while UK policies for salt reduction and tobacco control have been relatively effective, adverse trends in risk factors related to diet, including diabetes and BMI, continued unabated and rose fastest in the most disadvantaged groups.

In conclusion, the research threw up two findings that were unexpected.

First was the markedly equitable uptake of treatment both in hospital and in the community, and its substantial contribution to falls in CHD mortality across all groups. England in the early 2000s saw a raft of government measures to both reduce social inequalities in health outcomes and to improve the quality and delivery of healthcare - through clinical guidelines, pay-for-performance schemes and the doubling of public expenditure growth. That these measures appear to have been effective, at least in reducing deaths from CHD, underscores the potential for health gain through proper implementation of what we know works, especially so in a country with a universal health service.

There are several possible reasons (see footnote), but perhaps the most plausible is that the adoption of a range of healthy behaviours across the life course has a synergistic effect in accelerating the fall in mortality rates in the most advantaged group that statistical models cannot capture.

Actuaries involved in pricing and reserving for annuities and pensions will no doubt have an interest in the future progress of mortality differentials, particularly as portfolios are quite often skewed, with a few very large cases in the top social groups having a significant impact on the overall trend.

Where does this knowledge of the causes of improvements in mortality leave us in terms of projecting the future? This is an area of research that the actuarial profession, among others, is already engaged in. Any findings will be of great interest to actuaries, health professionals, scientists and policymakers.

Dr Madhavi Bajekal is a member of the profession's Mortality Research Steering Committee. She is a Senior Medical Statistician at Legal and General and a Senior Research Fellow (honorary) at UCL

This article appeared in our October 2012 issue of The Actuary.
Click here to view this issue
Filed in
10
Topics
Health care