Staring into a black hole

For almost a century, the world of economics and finance has been dominated by randomness. But as professional trader and mathematics professor Nassim Taleb reminded us in his book, it is possible to be Fooled by Randomness. For Taleb, the origin of this mistake was the ubiquity in economics and finance of a particular way of describing the distribution of possible outcomes

The normal distribution provides a beguilingly simple description of the world. Outcomes lie symmetrically around the mean, with a probability that rapidly decays. The distribution itself can be fully described by mean and variance. It is well-known that repeated games of chance deliver random outcomes in line with this distribution.

Yet in most systems - natural, social, economic, financial - normality is far from normal. Instead, risks are fat-tailed, with a much greater chance of catastrophic outcomes than implied by normal distribution. The reason for this fat-tailedness is simple - where there is interaction between agents or objects in the system, there is fat-tailed non-normality.

Fat-tailed risks in real-world systems have profound implications for public policy - and risk management. They can wreak havoc, from earthquakes and power outages, to depressions and financial crises.

The risk management tools used by many financial institutions rely on an assumption of thin-tailed normality. Consider the value-at-risk (VaR) techniques widely used by banks to capture and manage portfolio risk.

VaR is a statistical measure of risk developed by J P Morgan in the 1990s. It measures the maximum loss from a given portfolio position at a certain confidence level over a certain period of time. For example, if a bank's 10-day 99% VaR is $3m, there is considered to be only a 1% chance that losses will exceed $3m over 10 days. In this role, VaR can be used to help set risk limits for traders' portfolios. It can also be used to set regulatory capital standards for these.

The simplicity of VaR has led to its ubiquitous use. But VaR has a fatal flaw: it is essentially silent about risks in the tail beyond the confidence interval. Even if a trader's 99% VaR-based limit is $10m, there is nothing to stop them constructing a portfolio that delivers a 1% chance of a $1bn loss. VaR would be blind to that risk.

Worse still, the fatter the tail of the risk distribution, the more misleading the VaR-based risk measures. Consider holding a portfolio of world equities. Based on data from 1693 to 2011, we can calculate risk measures assuming a normal distribution of data and also using the actual data (see Table 1). The 99% VaR, assuming the data are normal, gives a loss of $6trn at today's prices. Using the actual data raises the estimated VaR by one third to $7.8trn. Calculating the risk conditional on being in the 1% tail of the distribution gives a loss of $18.4trn using actual data, compared with $7.3trn assuming normal distributions. Simple VaR underestimates these two risk metrics by a factor of 1.3 and 3 respectively. 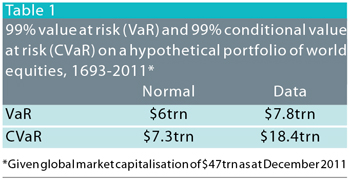 This example is far from hypothetical. The inadequacies of VaR were amply illustrated during the recent financial crisis. It could be argued that these crisis lessons have been learned, yet when in May this year Risk magazine asked risk managers whether VaR should be scrapped, a majority said no. And as a measure of tail risk, VaR continues to surprise on the downside.

On 10 May, J P Morgan announced losses totalling $2bn on a portfolio of corporate credit exposures. This took the world, and the management of J P Morgan, by surprise. After all, the 95% VaR on this portfolio in the first quarter of 2012 had been a mere $67m. This VaR measure was revised upwards to $129m on the day of the announcement. So far, the accumulated losses on this portfolio are said to exceed $5bn.

These problems do not begin and end with VaR. Many financial instruments have option-like payoff schedules. Since the early 1970s, these risks have typically been priced using the Black-Scholes options-pricing formula. But that also assumes log-normality of returns and can lead to mispricing of risk if financial returns are instead fat-tailed.

Imagine pricing a call option on rice prices using data over the past 1,000 years. Assume the price today is $100 and the option expiring in a year's time is at a deeply out-of-the money strike price three standard deviations above the mean. Assuming a normal distribution for price changes, the fair-value of this option would be one cent. Yet if the actual distribution of rice prices were used, its fair-value price would be 37 cents. The normality in Black-Scholes would generate enormous mispricing.

Turning from market to credit risk, the Vasicek model is at the core of many large banks' risk management frameworks. It allows the correlation of each asset in a portfolio with a common risk factor to be estimated. It is typically used to determine capital requirements under the internal ratings-based (IRB) Basel framework. But standard applications of the Vasicek model assume that the underlying risk factors - and portfolio losses, are normally distributed.

Suppose the common factor in the Vasicek model is GDP growth and this is assumed to be normally distributed. Under a baseline calibration using the foundation IRB approach of Basel II, and assuming a tail outcome for the common factor that occurs with probability 0.1%, the baseline capital buffer held to cover unexpected losses would be around 3%.

Another favoured empirical approach to modelling credit risk, in particular correlations across assets in structured credit products, is the so-called copula approach. The copula describes the co-dependence between asset values. It, too, is typically assumed to be normal. If the joint distribution between asset values is instead fat-tailed, the copula will systematically misprice risk in structured credit instruments. So it was during the crisis, as small differences in correlation made for dramatic adjustments in the price of structured credit products.

Taken together, non-normality suggests the need for a fundamental rethink of the core risk management tools used by many financial firms. That includes models used to set regulatory capital requirements. Even post-crisis, too many of these models remain at risk of being misled by normality. Failing to recognise those tail events - being fooled by randomness - risks catastrophic policy error.