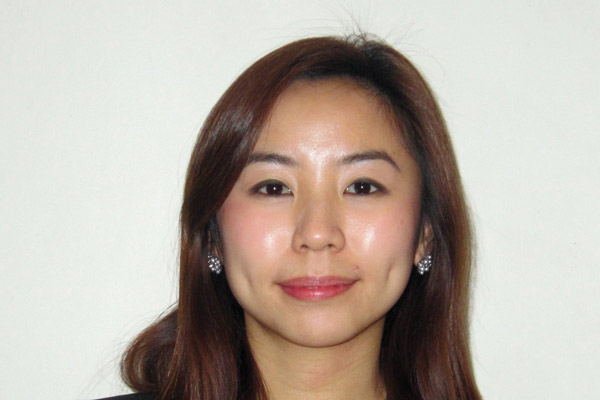 The UK and Ireland (UK&I) is the second largest market for individual life reinsurance after the US, in terms of both new and in-force reinsurance premiums.

However, it is important to recognise that the reduction in individual new reinsurance premiums has not reduced the relevance of the reinsurance industry in the UK&I. The key drivers of reinsurance premium decline, particularly shifts towards risk premium structures and lowered reinsurance rates, implies unchanged volumes of risk transferred, and in recent years the pressure on cession rates has been upwards, not downwards.

So while the growth outlook is more modest than in most of the leading growth economies (Figure 2), there are few markets, if any, where reinsurance is as fundamental to the functioning of insurance as a whole. 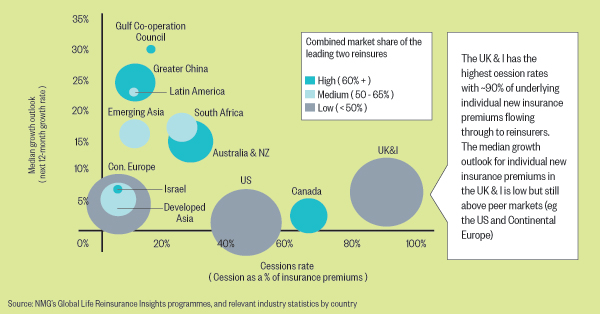 Arguably, there is no other market where life reinsurers are as interwoven into the functioning of the insurance industry as in the UK&I: insurer business models outsource most individual biometric risk; (reinsurance) actuaries' pricing models are granular in their design; and with insurers so heavily dependent on reinsurance pricing, reinsurers focus on working with insurers to find new underwriting and product models in search of differentiation in the primary market.

The tenure of this model is related to a period of innovation in the wholesale risk segment, including mainstream new risk classes, new processes and continually refined pricing models. Many of these innovations are relevant to other markets, so an active operation in the UK&I is an important platform for the global success for any reinsurer.

The UK&I is the most competitive reinsurance market globally. The top six 'global' life reinsurers, as well as two other specialist reinsurers, are active and providing services from within the UK&I. Indeed, 70% of individual new cessions arise from the top six largest cedants and 95% from the 10 largest, so reinsurers are required to compete for almost all business. Competing reinsurers are well invested with high-calibre teams, spanning actuarial, underwriting and claims, and often include a specialist annuities area. Insurers are aware of the spectrum of potential reinsurance partners and typically invite all parties to tender on a 12- to 18-month cycle, with independent decisions made for awards for each risk class. The quality of a reinsurance offer is important to the ultimate award, but with many attractive reinsurance partners, it is often easier for insurers to let price govern the decision which to select. With this process having operated for more than a decade, reinsurers generally report low pricing margins and minimal embedded value on new business, and in 2011, prices fell once again in several of the large reinsurance tenders.

In contrast to the other large single markets, there are relatively few constraints on the location or form of reinsurance capital, so the barriers to entry are likely to remain low.

For how long will the UK&I market retain its distinct profile with respect to cession rates? Detractors believe that under Solvency II, cession rates will fall as insurers begin to favour portfolio diversification over the simplicity of outsourcing risk to reinsurers. In most cases, the view is that cession rates will remain at current levels for the foreseeable future, supported by attractive reinsurance pricing and a level of certainty in respect of risk cost. Also, several insurers have business models premised on 'locked in' risk profits, and the lowering of the cost of risk, which is something that reinsurance partnerships and regular tender processes have achieved. Changing this may prove difficult.

However, recent falls in industry reinsurance premiums may well continue for a few more years, owing to further rate reductions, and to a probable continuation of shift to risk premium structures.

Perhaps the biggest risk to cession rates might be a material rise in reinsurance premiums for new business, likely triggered by a sustained period of sub-optimal returns for reinsurers. This could affect competitive activity in the primary market, particularly as experience variations are likely to arise from different operating processes among insurers, so rate rises will not affect all insurers equally.

Reinsurers constantly need to re-evaluate the trade-off between expected pricing margins, customer value and 'staying in the game'. Evidence suggests that, in contrast to non-life markets, reinsurers cannot easily re-enter life markets. Thereafter, they struggle with customer retention and are disadvantaged in understanding trends and the consequent ability to attract new business.

This article appeared in our September 2012 issue of The Actuary.
Click here to view this issue
Filed in:
09
Topics:
Reinsurance