Disability Income: Are we sitting on a time-bomb?


Disability Income Insurance (DII) became popular in Australia in the 1980s and the demand for it has kept growing. In-force premiums for individual business are around A$1.75bn and it accounted for around 35% of new sales in 2010. In addition, it has become an increasingly popular benefit to be offered through Group schemes. Typically referred to as Income Protection (IP) in the UK, it replaces a portion of the beneficiary's income during a period when they are unable to work due to illness or accident. In Australia, recent claims experience has been extremely poor, raising the question, are UK insurers sitting on a time-bomb with their own IP book?

DII (like IP) has the obvious, if often neglected, problem that the cost of a claim is very sensitive to how long the claim runs for. Many claims terminate within a few months, but some continue for many years. These long-term claims hurt the Australian market in the late 1990s, and have recently resurfaced. The market experience, however, is not universally bad. Before we explore some of the product design and operational features, which caused the problems, we will look briefly at the experience.

The chart below shows the experience of some of the worst-affected products. From this, it is clear that termination experience for long-term claims has moved sharply over the past several years. We use moving averages so that there is enough data to be statistically credible. The experience is not only poor, it has actually worsened over recent years. 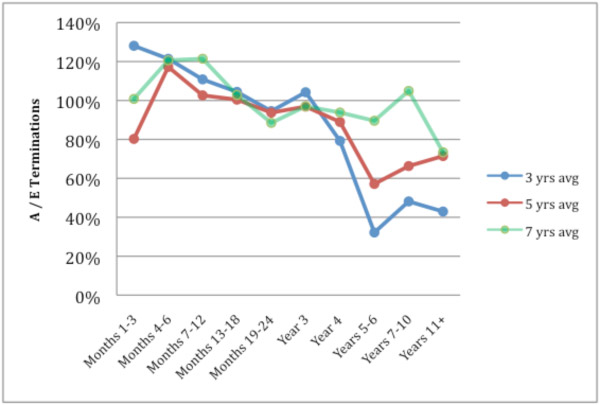 Drilling down further shows that there are individual portfolios where the actual number of terminations of long-term claims are less than 20% of that expected. Prolonged claims mean that the payouts made are intensified. In a competitive market, there is no hope of premium rates being able to support experience that is this poor.

The problems are not restricted to particular insurers or particular products. However, there are products and insurers where the experience is not only better than expected, but also improving.

The ups and downs of DII

As a product, DII has traditionally been seen as sensitive to economic conditions. One important reason for this is that employers are less interested in return-to-work efforts when they are reducing their workforces. It is therefore not wholly surprising that the market in Australia has recently been the cause of significant reserve increases for both insurers and reinsurers. The Australian economy of course endured the financial crisis like everywhere else in the world. However, their commodities-based economy has given them a much softer landing than the rest of the world. Their banking sector has not collapsed, they are not in the middle of a sovereign debt crisis and they are not facing aggressive cut-backs in services and jobs.

So is it just a matter of time before we wake up to find the UK IP market has blown up in our faces? After all, we face much deeper and more sustained economic problems, and much higher unemployment. Perhaps it is already a problem and the lack of data on long-term claims has hidden the truth from us? Let's hope not. There are actually real reasons to hope, but there are also things we have to watch. To see what really happened in Australia, we have to look at the upward journey of the roller-coaster and not just the way down.

On the way up, parts of the Australian market lost their discipline. This has been the case in both product design and claims management.

The Australian market is as competitive as the UK, particularly in the IFA market. This led to a weakening of discipline around product development. In Australia there were a number of examples of this, such as benefits which continue to pay out past normal retirement age. These benefits are toxic: imagine a 64 year-old watching his employer making colleagues redundant: all it takes is to be signed off for stress and you have 75% of your income, for life. Sometimes more than 75%: we have also seen various designs such as benefits fixed at outset, which can take the replacement ratio even above 100%. These product design decisions were made in the 1990s and early 2000s and have already been hurting the market for some years. The real impact is now magnified by the economic situation and in some cases by weak claims management.

There is undoubtedly a shortage of qualified claims managers in Australia. As demand for Group DII grew as Superannuation Schemes matured, the industry collectively under-invested in training, systems, and staffing. Claims has suffered as a profession relative to underwriting, which has seen significant investment and management attention. The result: claims are under-managed at an early stage, long-term absenteeism has become part of the culture, and the losses are now emerging. There is evidence across the world that early intervention cuts long-term claims and Australia is no different. For some insurers this is still a significant issue and it has been so for at least five years.

Could this happen in the UK?

We do not know. We have certainly not seen data to convince us that we have a problem. However, competition is growing in this market and prices are tightening. These conditions lead to more competition around product design and more strain on claims managers, who have to manage growing books with static or declining resources. So whether or not the time bomb is ticking, insurers active in IP need to ask themselves the following:


Now would be a good time to act. Though the damage is done in regard to product design, we can at least prevent the next generation of problems.

Finally, in regard to claims management it is never too late. As little as three years ago the large Australian insurer OnePath (ex ING) had significant issues with long-term claims. After a sustained effort to rebuild claims management, they are one of the few insurers that have sailed through the latest experience well. This has taken investment in systems, processes, and above all skills, but there is no doubt it has been worth it. As the Head of Retail Insurance at OnePath, Gerard Kerr, puts it: "Ongoing investment in your claims people and supporting capabilities is core to your success. Just because you are ahead you can't get complacent". Perhaps that's the lesson the UK market needs to learn from the Australian experience.

Andy Rear is CEO at Munich Re

This article appeared in our July 2012 issue of The Actuary.
Click here to view this issue
Filed in:
07
Also filed in:
Interviews
Topics:
Global