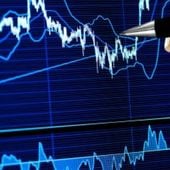 The way in which investment returns behave when movements are more extreme has been a focus of financial modellers for some time. Approaches such as copula theory allow such features of returns to be modelled. However, it is also important to consider how the risk of extreme co-movement is measured.

There are a number of approaches that could be used. For example, tail correlation - essentially the correlation calculated between observations in the bottom left (or top right) of a joint distribution - could be used. However, this measures only the direction of the relationship between the variables.

This is an issue, because it does not matter if the relationship between two variables in the joint tail of a distribution is strongly positive if the probability of there being an observation in this tail is vanishingly small.

This is equal to the centile that is being evaluated. For example, the maximum proportion of a joint distribution that would be found in the bottom 5% of both variables is 5%. Dividing the observed figure by the maximum - or the centile - gives a number between zero and one.

If the size of the tail used in this calculation is vanishingly small, then the resulting statistic is known as the coefficient of tail dependence. However, when this limiting measure is used, it has a major drawback: it does not distinguish between the tail dependence of any normal distributions or copulas where the correlation is less than one.

One simple solution is to evaluate the statistic for a given finite size of the tail you are using, for example, the bottom 5% of observations in each of two asset classes. This would give a coefficient of finite tail dependence at the fifth centile.

All of the above statistics can, in fact, be evaluated for more than two variables at once. The extension of correlation-related measures to higher dimensions often means making arbitrary generalisations to formulae. Often, the only criterion for such generalisations is that if only two dimensions are used in a formula then the result is the 'traditional' expression for the correlation. However, for coefficients of tail dependence (finite or otherwise), the inclusion of additional risks is straightforward.

For example, for n variables, the coefficient of finite tail dependence for the fifth centile is simply the proportion of the joint distribution where all observations are in the lowest 5% for each variable, divided by the equivalent figure.

While these statistics are useful for analysing the behaviour of joint distributions, they do not necessarily describe the risks faced by many institutions. These risks are not usually focused exclusively on the risk of extreme joint events; rather that the combined effect of events will be extreme. Two statistics are particularly useful here: the probability of ruin and the economic cost of ruin. In relation to a stochastic model, the probability of ruin is simply the proportion of observations where there is an aggregate loss beyond some pre-defined threshold.

The economic cost of ruin, on the other hand, is the average of the observations beyond that threshold.

While these statistics are useful, they can also be numerous. This is important, as useful statistics become useless if they cannot be interpreted easily. Graphical communication is important.

Figure 1: Scatter plot display of the coefficient of finite tail dependence against the importance of risks 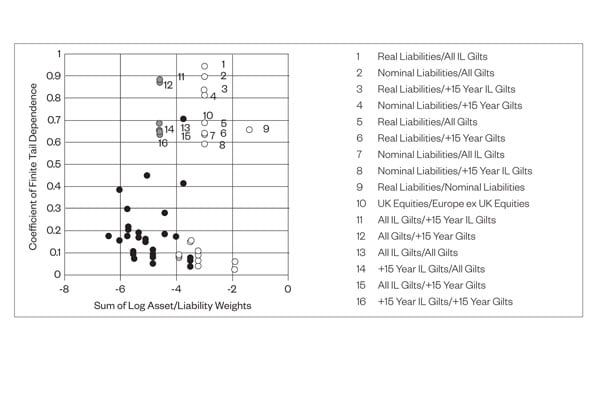 A number of approaches are given in Sweeting and Fotiou (2011), but two in particular are examined here. The first, in Figure 1, has three items of information.

On the vertical axis is the coefficient of finite tail dependence between a particular pair of risks, although groups of three, four or even more risks could be considered together.

On the horizontal axis is a measure of the joint importance of the risks, taken as the sum of the log of the asset (or liability) weights, with all weights being taken as positive. The principle behind this is that while the relationship between (for example) two assets might be strong, this is only important if there are significant holdings in both of those assets. The sum of log assets (or liabilities) is intended to capture this. Lastly, the points are colour-coded. White dots represent risk combinations between pairs of liabilities, black dots represent risk combinations between pairs of assets, and grey dots represent risk combinations between an asset and a liability. Black or white dots in the top right corner therefore highlight a significant risk combination, one where there is a strong tail relationship between two significant assets or liabilities; conversely, grey dots in the top right corner should be reassuring, since they reflect an asset that matches a liability well. 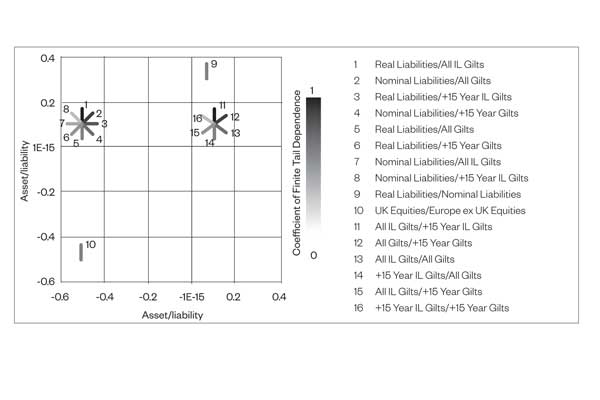 An alternative approach is to use a sunflower plot (figure 2). Each point on which 'petals' are centred represents the combination of assets in particular weighting 'buckets'. So, for example, the first eight risk combinations all reflect a combination of an asset with a weight of 0.1 and a liability with a weight of 0.5. The colours of the petals then signify the strength of these relationships, from very weak (white) to very strong (black).

More charts are given in Sweeting and Fotiou (2011), as well as more background to tail dependency and extreme loss risk measures. However, this article hopefully gives a useful overview.

References: Sweeting, P J and Fotiou, F (2011), Calculating and Communicating Tail Association and the Risk of Extreme Loss, a paper presented to the Institute and Faculty of Actuaries

Paul Sweeting is European head of J P Morgan Asset Management's Strategy Group, and professor of actuarial science at the University of Kent
This article appeared in our April 2012 issue of The Actuary.
Click here to view this issue
Filed in
04
Topics
Modelling/software