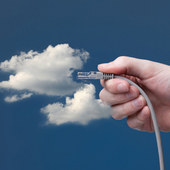 For technology companies, the buzzphrase of the year has been 'cloud computing'. But what does it actually mean?

At its most basic, all that it means is doing things online rather than on a single computer or a business network. The cloud is a jargon term that means different things depending on the person to whom you're talking, but largely it can be taken to mean 'the internet'.

For instance, using Hotmail, Gmail or another web-based email service is ?cloud computing. When individuals do that it's nothing special, but some companies have been moving their email services to 'the cloud', which is a big deal.

For the first time, IT administrators have been relinquishing control of their servers and effectively outsourcing them to internet-based companies. One of the biggest of these is Google, which offers a customised email service to enterprises. Employees keep the same addresses they had before, but instead of the email being collected by the firm's own mail servers, it's collected and processed by Google. The advantage to companies is that they can save money, but it also allows for very rapid expansion. If you need to add 1,000 employees, there's no need for the IT people to buy a new server. Instead, just open more accounts 'in the cloud' and Google does the hard work on its servers.

Similarly, many online enterprises are turning to the cloud for all their servers. Companies that do a lot of data processing can either run their own servers, or host them in the cloud and not have to get their hands dirty. And if business starts to grow rapidly, it's no problem to expand the server capability.

There are downsides  earlier this year, the cloud computing service run by Amazon, the biggest player in this area, collapsed and became unavailable. The result was that some of the internet's biggest up-and-coming websites, such as Foursquare, Quora and Reddit, were taken offline for some time.

For home users, one of the most useful purposes for cloud computing is backup ?and file sharing. Not the kind of illegal ?file sharing you hear about in the news, but sharing of important documents or pictures.

Online backup services have been springing up over the last few years, offering up to several gigabytes of space for users to store their own files. This is usually combined with an automatic backup program to allow people to automatically safeguard their own computers against failure by copying their most important files to secure online servers.

Similarly, Dropbox allows users to store their personal files online but seamlessly access them through their own computers  the service puts a Dropbox folder on the computer, and this is then synchronised with the online storage automatically whenever the computer is on. Change a file, and it'll automatically be copied to the cloud. Switch to another computer on which your Dropbox account is set up and your files will be replicated there, changes and all. It even saves previous versions, with 2GB of storage available free, and more as a paid-for extra. Cleverly, Dropbox also has apps for major smartphone models so that you can view your files on an iPhone, iPad or Android tablet computer.

If you can get it past your company's IT security it's even usable for work  rather than a complex program that gives remote access to an entire computer, putting a few important documents in your Dropbox means they'll be available anywhere.

Of course, that brings data protection into play. While Dropbox has so far not undergone any major security failures and has acted well in the problems it has suffered, putting business documents on it does pose some questions. If your phone is linked to Dropbox and is stolen, for instance, how quickly would you be able to remove the attacker's access to your files?

That's not necessarily a reason not to look into using cloud storage for yourself, but it's certainly important to bear it in mind.

This article appeared in our November 2011 issue of The Actuary.
Click here to view this issue
Filed in:
11
Topics:
Modelling/software