I recall, and this will show my age, images of Indian and African famines from John Cravens Newsround, Do They Know Its Christmas and Freddie Mercury doing his stuff at the original Live Aid concert. It seemed in those days that one of the automatic, albeit delayed, consequences of famines was an outpouring of celebrity emotion which galvanised the public to part with their money. 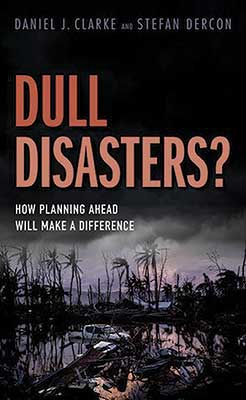 I recall, and this will show my age, images of Indian and African famines from John Craven's Newsround, Do They Know It's Christmas and Freddie Mercury doing his stuff at the original Live Aid concert. It seemed in those days that one of the automatic, albeit delayed, consequences of famines was an outpouring of celebrity emotion which galvanised the public to part with their money.

But does it need to be like this? Whether it be famines or floods or earthquakes or any other sort of natural disasters (which are never simply natural) is there not a better, and dare one say 'more modern', approach to dealing with them and alleviating at least the worst of the impact? Well, maybe there is and, what's more, it is something that actuaries will understand: insurance. Yes, insurance.

Daniel Clarke, an actuary working at the World Bank, and Stefan Dercon, chief economist of the Department for International Development, have written Dull Disasters? with 'dull' capable of being understood as an adjective and as a verb. While the idea of using insurance to protect individuals and organisations against the effects of a variety of risks is well understood; the idea of using it to protect countries against some of the effects of disasters may sound more novel. There are, however, a number of insurance and similar financing schemes already in place and a growing body of academic and non-academic literature, much of which is referenced in the book's extensive bibliography, analysing the impacts of these schemes, seeking to learn lessons from what works and what does not.

The book will be of particular interest to those who, with some actuarial experience, would like to see examples of how actuarial skills can be applied in a wider field, and particularly one, that could have such an impact on the lives of many people. In recognition that many readers may have a limited knowledge of some of the topics covered, the authors have included a helpful glossary of terms.

The focus of the book is on the less developed countries. The more developed countries are better able to look after themselves in the face of disasters (although how the UK will manage in the face of the man-made disaster of Brexit is anyone's guess at present) due to their generally larger budget, contingency funds, greater access to financial markets and human capital. Less developed countries, on the other hand, have less 'spare cash' available to deal with disasters, find it more difficult to borrow, and have access to fewer specialists in dealing with the aftermath of events such as earthquakes or famines.

Clarke and Dercon explain how the response to disasters often unfolds: slowly, politically, fragmented and inadequate. In place of this, they describe how insurance-based schemes could provide objective, timely and reliable funding to help countries respond to the immediate needs of their population (food, water, shelter, infrastructure repair and so on) following a sudden shock. These schemes already come in a variety of shapes and sizes and no doubt further variations will emerge as experience grows.

Insurance is not, however, a panacea.

On a technical level, for example, basis risk can undermine the value of schemes based on indices while at the human level, the proceeds from insurance could still be badly used.

Also, and this is my only quibble with the book, bringing in insurance could have the effect of crowding out humanity and heartfelt generosity. It could harden hearts against those who suffer from a disaster; "they should have insured themselves", "it's all their own fault" could become the cries. The authors want to move away from what they call the "medieval begging bowl" approach to disaster response but there was perhaps more charity and fewer begging bowls in medieval times, particularly in England before the dissolution of the monasteries and the implementation of the Poor Laws, than they have given credit for.

Reading this book will encourage actuaries to look for ways they can contribute to the advancement of less developed countries through the application of their professional skills.

Dermot Grenham is an actuary at the Medical and Dental Defence Union of Scotland
Filed in:
2016