Figures of Death by PJ Sweeting

Figures of Death by PJ Sweeting 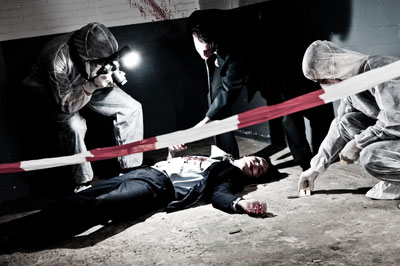 Many detective novels are published each year, so it can be challenging for a book to stand out. For the most part, Figures of Death succeeds in this regard.

The book starts well with an intriguing in medias res prologue, before kickstarting the story with an unexpected and shocking death. This links the two storylines that play out across the book. The first concerns Tom Chambers, chief actuary of a fictional insurer that was given start-up capital by the victim's company, and a perpetual layabout. The second describes DI Steve Norfolk, who must investigate the death of the victim. The two parts begin with no apparent connection; but as events unfurl, it becomes clear that there is more to the victim's death than a regular car crash, and both men must search for the truth. Inevitably the two narrative threads intertwine towards the conclusion as more deaths occur, and the killer is unmasked.

The two storylines take alternate chapters, which keeps them both absorbing with neither side ever feeling too stale, and the surprises unfold at a rate that is tense without being melodramatic. As a result, I was engaged by the book, consistently keen to see what would happen in the next chapter and always interested in catching up again with the other character's progress. This made the book very hard to put down.

That is not to say Figures of Death is without fault. Norfolk's story sometimes veers into predictable territory. It employs a 'maverick cop who plays by his own rules to get the job done' trope, which has been done many times by various TV shows. There are good parts to the story - in particular Norfolk's visit to and discussion with his therapist, which was taken to an unexpected place - but I found myself wishing there had been more of these and less of the played-out themes.

Tom Chambers' actuarial backdrop at times has the opposite issue- a setting so uncommon that it may alienate some readers. As an actuary reading the book, I was thrilled to see our profession featured in a fictional context and found the various in-jokes and references to the actuarial lifestyle genuinely funny. It was also impressive that actuarial issues were written into the core of a crime story in a way that didn't feel forced. However, this may lead to problems for the non-actuary reader. Occasionally, actuarial concepts are explained in a way that assumes too much about the reader or their knowledge. As critical plot points and twists depend on an understanding of these ideas, the book may at times feel inaccessible to someone without an intermediate knowledge of finance.

The ending is also quite mixed. Enjoyably, it manages not to deviate into the ridiculous or contrived twists that too many modern crime stories mistake for originality. But as a result it plays its twist and killer's identity a little too straight, which renders it rather predictable.

I suspect that anyone who has read a few crime books before would be able to name the murderer 40 pages out. This is not a killer blow, but does reduce the effectiveness of the last few pages and left me feeling slightly disappointed.

More frustrating than any of the above is that as all the police officers are referenced by surname and all the actuarial staff by first name, it makes it very confusing. I found myself wishing I had written down a full character list.

Ultimately, however, Figures of Death is to be recommended. It maintains a sense of suspense well and kept me fascinated until the end. Although it does at times delve into more predictable territory, it will nevertheless satisfy any reader searching for a solid page-turner that is superior to many of its literary rivals.