Misbehaving: The making of behavioural economics

Misbehaving: The making of behavioural economics 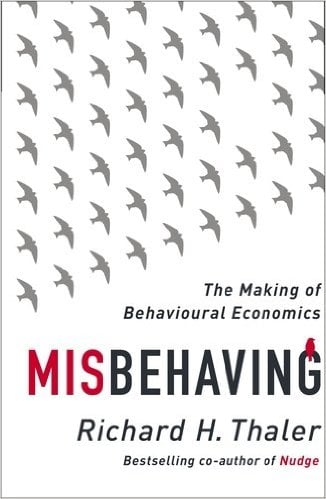 Richard Thaler's latest book Misbehaving is, in effect, an academic autobiography charting his course over several decades through the choppy waters of economics, with his colleagues reluctantly coming to terms with the irrational behaviour of human beings.

Professor Thaler is based in Chicago and best known for his book Nudge with Cass Sunstein, which I reviewed ( bit.ly/1Zmagyh) in this magazine along with an interview with him. He has since worked for the No 10 Downing Street 'behavioural insights team' known to everyone as the 'nudge unit'.

Richard Thaler's father, Alan, was an actuary, so he collected some life table information and wrote an early paper on the value of a human life. This led him to test his ideas on his classes, which were asked how much they would pay for a cure for a disease with a 1-in-1,000 chance of killing them (up to $2,000) and separately, how much they would demand in safety money for an experiment which would have a 1-in-1000 chance of killing them (at least $500,000). In other words their lives were worth no more than $2m and no less than $500m. Contradictions like this run throughout the work.

In this book, Professor Thaler contrasts the behaviour of two types of creature, Econs (who behave just as any economics text book would tell you to) and Humans, who just don't get it.
So the professor with an old bottle of vintage claret in his cupboard now worth $500 is happy to share it on a special occasion with his friends. But would he pay $500 for a bottle of top claret to celebrate? No he couldn't afford that expense. The endowment effect, where we are influenced by where we start from regardless of the logical choices we face, forms a core of his writing.

Thaler introduces prospect theory, where an economist conducts his work by looking at how people are likely to behave. A subject might be uncomfortable tossing a coin for a 50% chance of winning $2,000 rather than accepting $1000 on the table. The reason is that the first $1000 is worth more than the next because of the diminishing marginal utility of wealth. Prospect theory is about working out how real Humans are likely to behave.

The other focus of his analysis is what he calls SIFs - supposedly irrelevant factors. He started on this subject when, faced with a set of students disappointed with average marks of 72 out of 100 in his exams, he increased the total mark to 137 and found that an average of 96 (70% in fact) went down much better with the class.

An amusing long list of SIFs includes tickets to a sports game during a major winter snowstorm with travel almost impossible. The people who won free tickets in a raffle decide not to struggle to get there. The ones who purchased their own brave the elements there and back. Their decisions should really have been the same.

The book is great fun to read, dealing with all kinds of anomaly in human interaction. My favourite conundrum is the question:
"Guess a number from 0 to 100 with the goal of making your guess as close as possible to two-thirds of the average guess of all those participating in the contest".

Answers please to [email protected] and we will present the analysis of how actuaries answered this question in a future issue and compare it with Humans.

The science of behavioural economics is important for us in our work persuading people to take out insurance, contribute to pension policies or plan for their financial well-being. This book is thoroughly worth reading as a foil to those moments when you want to argue for the magic, invisible hand of the market.

Peter Tompkins is a consultant pensions actuary, and chairman of The Actuary editorial advisory panel