The Actuary: From Russia, With Love Book 1

The Actuary: From Russia, With Love Book 1 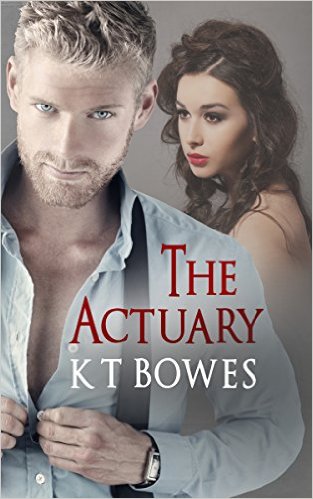 Actuaries do not feature much in popular culture and it is rare to find a film or book with an actuary character in it - presumably because they are considered boring by authors. So imagine my delight to stumble across the intriguingly titled novel The Actuary. I was hoping for a book that would be interesting while accurately portraying actuaries and what they do, or at least fall into the 'so bad it's good' category.

Regrettably, I am disappointed on both counts. The first warning sign was a blurb promising "a dangerous conspiracy intrigue". This already sounded bad, but from there the book only became more absurd.

The plot concerns a single mother, Emma, whose ex-husband Rohan arrives to save her after her life has gone astray. He is the eponymous actuary, his work is secretive and it only becomes more so as Emma gets to know him again. He refuses to answer questions about his occupation and Emma's suspicions are compounded when she discovers that she and the house she is living in are being watched by a stranger. As the story progresses, Emma must discover what Rohan's true job is, while competing with the other women in his life: his mother and fiancée.

Following this uninspired set up, the story moves from one tired cliché to the next, mixing bland characters with contrived scenarios. The book spends 200 pages establishing events, but nothing happens and the reader could genuinely start at chapter 20 and have missed nothing. After this, the plot fails to produce any pay off as 30 pages of narrative are spread across 270. Ostensibly there is some kind of spy thriller occurring and it turns out (shockingly) that Rohan's employment as an actuary is not all that it seems - but the details are poorly explained at best and often left out altogether. New characters appear and disappear at an alarming rate and for no reason. I commonly found myself trying to remember whom I was meant to care about, and why. To call this boring would be generous.

The secondary story about Rohan's mother and fiancée is somehow even less interesting. The female antagonists are so ridiculously, impossibly evil that they lack any credibility. Emma herself is little better, being entirely unlikeable as a protagonist and coming across as one-dimensional.

Worse than all this, [spoiler alert] the conclusion ultimately involves Emma getting her man and vanquishing her foes in the least convincing deus ex machina I have ever read. It takes the form of a hitherto unknown and unmentioned inheritance appearing out of thin air to resolve every outstanding plot point. I would have thrown the book across the room in disgust if I had still cared at this point.

Sadly, there is very little actuarial accuracy to be found in The Actuary. Typical actuarial work is described early on (and in fairness it is a pretty good description) but is then entirely disregarded. As one particularly witty Amazon reviewer noted, "there is a passage where it is clear that Rohan has not complied with the various requirements of the TAS. In real life he would be leaving himself open to being disciplined by the profession. What's more, the story takes place over the course of a year and it is by no means obvious that he clocks up sufficient CPD hours, which again means he could be hauled over the coals, or even fined." One can only expect the IFoA to come calling in a follow-up book.

To add the lack of actuarial relevance, it turns out that Rohan was able to use his skills from serving in the army in his new career. Further, actuaries' work seems to mainly involve cybercrime, theft and gun- and fistfights. I cannot help but feel my own CV is lacking in comparison.

The Actuary is not even the fun kind of trash that makes for a great holiday read. It is tedious, incoherent and entirely unbelievable. The last page reliably informs me that a sequel will be released "in late 2015". I cannot recommend reading it, or this book. Frankly, the Formulae & Tables we receive in exams would have been more gripping - at least that would have allowed the suspense of wondering what the next percentile of the normal distribution will be.