The Future: Six Drivers of Global Change by Al Gore

The Future: Six Drivers of Global Change by Al Gore 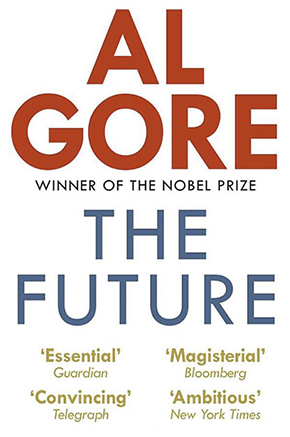 There are many ways to get the most from this book.

I read it end to end and found it as much of a page turner as any work of fiction. At the other extreme, it could also be a starting point for a research project into all, or any, of the six major themes it covers. The depth and breadth of research and the thought that has gone into the book is obvious. The author engages the reader, almost inviting you to write your own version by sharing the mind maps he created as he put the book together.

Gore's six themes are bookended by an introduction and a conclusion, each almost as rich as the main chapters. While I could not do justice even to one chapter in this short review, here is an attempt to get the essential ideas across.

Gore explains that the exponential increase in the pace of technological change influences the role that each of us plays in contributing to production and also in benefiting from consumption. This affects every individual, but globalisation means that the groupings we identify with, whether professions, social groups, or even states, are becoming less relevant. Technology capital is replacing labour, so an increasingly large proportion of economic gains go to capital - something that feels like a social injustice, or even a conspiracy, to many.

Communication technology is having just as powerful an effect on governance - national and corporate - as well as the intermediation of products and services, the availability and usability of knowledge, and the need for humans to adapt to compete. 'Knowledge is power' may be a cliché but organisations are increasingly able to 'know' us as individuals, instead of members of a group. These factors are having an impact on our perceptions of security and privacy.

'State' governance is weakening both nationally and globally, compared with the advancing role and influence of corporations, political systems and markets. This correlates with a shift of economic power from West to East, and the influencing role of technology. The related chapter is interlaced with warning signs, such as the rise of fundamentalism and resource shortages, using the near-default of the previously all-powerful US as a prime example.

Gore shifts his focus to the limits in natural resources, contrasted with the perceived ability of technology to compensate for any difficulties in exploiting them. He reminds us of the impact of population explosion, overlain by consumerism that is driven by economic policies as much as envy. Coupled with the author's assessment of behavioural influences, these factors leave the reader struggling to find any hope that we are not accelerating towards an inevitable crash.

There is more optimism in the next chapter, in which an analysis of advancing healthcare technology holds out even the prospect of the "digitization of life". However, the technologies exposed here might do more to make the reader reflect on the irony of this massive investment to prolong effective life for a few at the end of their natural life, juxtaposed with the challenge of global infant mortality.

More worrying are the examples that demonstrate the complexity of the world and our inability to understand the possible side effects of every technological 'advance' that we make.

Gore brings his thesis together in the final chapter, before returning to the theme on which he now spends most of his time: climate change. This is a useful summary of the arguments in favour of both mitigation and adaptation. It illustrates the tension between the destructive tendencies of commercial interests, and the collective global conscience that has already allayed some of the world's worst injustices. These opposing forces have been made more powerful by communications technology.

Several times since I read The Future, something I have seen or heard has taken me back to it, and I have found myself thinking about the world in a way I had almost forgotten. While it is only one interpretation of global trends, and there are many that are equally valid, reading this book with an open but sceptical mind would be illuminating for anyone.