Anastasia Aboim dusts off her magnifying glass for a trip to the Museum of Londons exhibition dedicated to Sherlock Holmes, then on to the Wellcome Collection, for an exploration into forensics and crime analysis 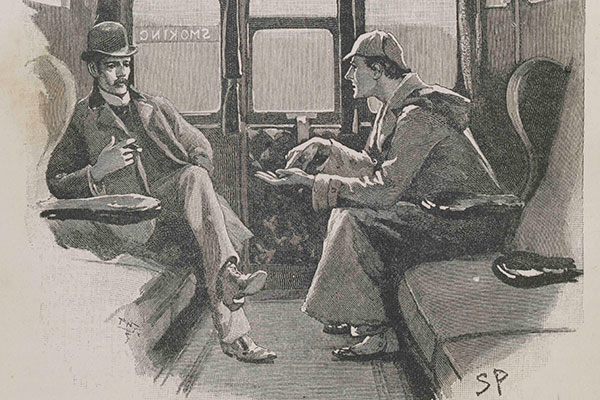 Becoming a sleuth in real life may only be a pipe dream, but there are other ways in which to stimulate your powers of deduction.

Running until 12 April 2015, The Museum of London salutes the world's favourite consulting detective, in Sherlock Holmes: The Man Who Never Lived and Will Never Die.

An exhibition about a fictional character shouldn't be as odd as it sounds - after all, we hold other characters such as Harry Potter or folklaw hero Robin Hood in high esteem.

Yet Sherlock Holmes is celebrated in quite a unique way. Baker Street is his home, the deerstalker his hat of choice, and the debate over whether he ever actually uttered the immortal words "elementary, my dear Watson" ignores the minor technicality that, as a man who never actually existed, Sherlock never really said anything.

It is because he has been written about and portrayed so vividly, on both stage and screen, that we feel we know him and want to join him in his mission to solve crime and attain justice. Quite clearly, we have a long-standing affection for the emotionally unavailable, obsessive, yet highly intellectual individual, and the Sherlock exhibition is a great way to remember how and why he affects us so.

The real face of Sherlock

Being greeted by original artwork from the films and plays and hearing the array of voices that have elevated Sherlock to a pop-culture icon really makes you feel the character's strong charisma and identity.

Putting the many actors that have played him out of mind - which is hard to do when surrounded by the film and TV screens on show - the truest face of Sherlock was by illustrator Sidney Paget (above). Seeing his sketches of the fabled detective's stern features and Victorian demeanor, he is not unlike the self-portrait of Sherlock's creator, Sir Arthur Conan Doyle, down the hall.

Behind every great character there is a great author, and Doyle's success made him one of the giants of Victorian literature. Doyle - who originally trained as an eye doctor - had a passion for science and demonstrated acute vision and observation. Sherlock's character may well have been a reflection of Doyle's own rational, analytical personality.

Parts of the exhibition are also dedicated to influencers Edgar Allen Poe and Doyle's tutor at Edinburgh, Dr Joseph Bell, on whom he based some of Sherlock's quirky mannerisms.

Whether Doyle was fond of his creation or not, he had trouble moving on in a literary sense. In an attempt to be taken more seriously as a historical writer, Doyle killed off his most famous character, but was later forced to revive him by popular demand.

It is thought that 20,000 people threatened to cancel their subscription to The Strand magazine, which published Sherlock's adventures. It appears this same enthusiasm for Sherlock endures today.

As well as his trusty sidekick, Dr Watson, the exhibition highlighted a third character in Doyle's stories; London. At the time, the capital was establishing itself as an industrial powerhouse, with majestic buildings, that were cutting-edge in every way. Images of Hansom cabs and steam trains depict the urban modes of transport vividly described in his stories. The foggy capital is the perfect backdrop for the complex world of Sherlock Holmes.

Photographs and paintings mirror family scenes from his many different cases. Famous hotels and sites in Holborn and the Strand are mentioned in A Study in Scarlet. John Anderson's stunning landscape, Westminster Bridge, Houses of Parliament and Westminster Abbey seen from the River, is as dramatic as any movie scene. The priceless hand-written drafts and fascinating facts will enlighten avid Sherlock fans.

At the second exhibition, Forensics: The Anatomy of Crime by the Wellcome Collection, a newspaper headline announces Doyle's meeting with the 'French Sherlock', criminalist Edmond Locard. This neatly demonstrates that Sherlock's popularity and progress in crime analysis went hand in hand.

The public's love of a good crime thriller was, and still is, fuelled by the press. The papers not only peddled gossip but also brought forensic advances like fingerprinting to the fore. In the Dr Buck Ruxton trials, forensic evidence linked Ruxton's movements with the timing of the murders (maggots found on the bodies are on display). Similarly, evidence against Dr Crippen led to his conviction.

Over the decades our lust for gore has grown; harrowing images are no longer forbidden on television, and the plethora of TV crime dramas speaks for itself.

However, no case, fictional or factual, was as infamous as the so called Whitechapel murders, usually ascribed to the unidentified character, Jack the Ripper, between 1888 and 1891. The victims were all women from a similar background, murdered in a similar way. The killings were splashed all over the papers of the time, yet, despite extensive enquiries, a lack of forensic knowledge and technology meant the culprit evaded capture. Tools of the day were restricted to pen and paper. Police would reconstruct crime scenes with sketches and crude drawings. Jurors would meet to discuss cases in public houses, as seen in an extract from Charles Dickens' Bleak House. Dickens would often point out flaws in the system of the time.

Bring up the bodies

Our fascination with death seems to have followed us throughout the ages. The morgue room begins with a public display of unidentified bodies in turn-of-the-century France. It contains some of the first studies into decomposition and pathology. Notable examples include the beautifully macabre Japanese kusôzu or 'images of the nine stages' of the deterioration of a noble woman's corpse.

There is a slightly comical sketch from the Middle Ages - The Wounded Man, which illustrates the various lacerations a person could suffer in battle or by accident.

The exhibition's forensics timeline of crime-solving technology takes you from the Metropolitan Police's first camera through to virtual autopsy 3D scanning. Fact or fiction, there is always progress to be made for a better way to crack the case.

Sherlock Holmes: The Man Who Never Lived and Will Never Die is at the Museum of London until 12 April, and Forensics: The Anatomy of Crime is at the Wellcome Collection until 21 June.