Arts: Let's call it a date

This year is a celebration of both the old and the new. Anastasia Aboim selects some of the cultural and sporting highlights coming up in 2015 in the UK 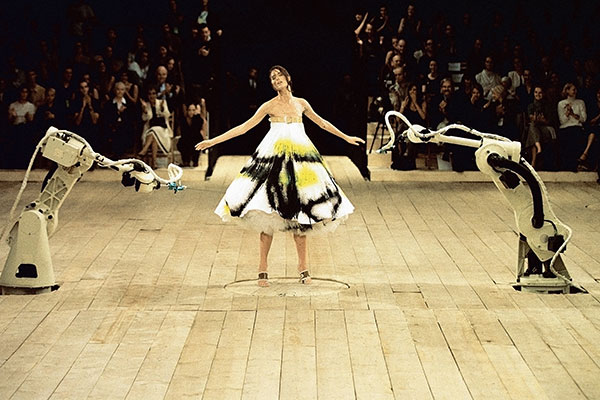 Sure, you'll be waiting for the return of the Large Hadron Collider, the launch of the Apple Watch and commemorating the bicentenary of the Battle of Waterloo along with the rest of them, but, besides the obvious, here's some of the events that will leave your 2015 calendar packed with things to do.

The V&A has two must-see exhibitions for fashion fanatics, starting with Shoes: Pleasure and Pain. If you ever bent yourself backwards for the shoes of your dreams, it's nothing compared to what some of the owners of the pieces on display would have endured. Spanning the bizarre, the shocking and the just plain impractical, this exhibition has brought shoes from across the globe, including ancient Egyptian sandals and hi-tech ones created by a 3D printer. More conventional creations include pieces owned by icons from Queen Victoria to Marilyn Monroe. A unique look into how footwear floats between necessity and obsession. No Crocs allowed!

In March, the V&A will bring Alexander McQueen: Savage Beauty - the successful exhibition about the most talked-about designer in a generation - from New York to the capital. The collection will be presented in themes, from McQueen's graduate collection to his unfinished collection for Autumn/Winter 2010. Described as having dramatic staging resembling his catwalk shows, this exhibition will journey through the life of the man who invented the bumster trouser, revived skull print and who wowed his audience to the very end. This is bound to be a stunning exhibition with the works of a true original.

One of the most famous diary-keepers gets a nod from the National Maritime Museum in Samuel Pepys: Plague, Fire and Revolution. This will offer an interesting insight into the turbulent period between the execution of Charles I in 1649 and the Glorious Revolution of 1688, narrated by Pepys himself, and with 200 paintings and objects.

The Science Museum kicks off Churchill 2015, a unique programme of events to commemorate British wartime prime minister Winston Churchill's life, work and achievements, with the Churchill's Scientists exhibition. In honour of the 50th anniversary of his death and the scientific breakthroughs that occurred during his leadership, the exhibition will tell the many remarkable stories showing how science helped Britain to win the war.

Original archive film footage, letters and photographs will shed light onto how Robert Watson-Watt invented radar, how the Tube Alloys project made a home-grown atomic bomb and on the powerful high-speed camera built to film the first seconds of detonation.

There were also breakthroughs in medicine with the production of penicillin and antibiotics and in nutrition with the pioneering work of Elsie Widdowson. Her research into the war diet, compiled in the book The Composition of Foods, is still referred to today. But these developments may not have happened without Churchill's fascination with, and encouragement of, science. Visitors can also see Churchill's personal items, including one of his many famous cigars - smoked upon hearing he had been re-elected in 1951.

Three years after the Olympic Games upped the ante in British sport, fans won't be disappointed by what's lined up this year.

? The Rugby World Cup is coming to our shores in the autumn. The six-week-long clash between 20 nations will be held in 13 venues across 11 cities, including Newcastle, Manchester, Cardiff and London. The final will take place at the home of rugby, the Twickenham Stadium, on 31 October.

Around half a million international visitors are expected, and with prices starting at £15 per ticket it's accessible for rugby novices to soak up a great atmosphere while watching great sport.

The tournament opens on 18 September

? Scotland may be missing out on hosting the Rugby World Cup (it did host last year's Commonwealth Games after all), but Glasgow will get its hands on the World Gymnastics Championships this autumn. Olympic medallist Louis Smith and other familiar faces will be back to consolidate past successes, and, no doubt, the recently retired record-breaking British gymnast Beth Tweddle will make an appearance.

The championships take place from 23 October to 1 November

Leading a spurt of new blood are two bands, both trios, one from the north and the other from the south.

? All We Are delivers a sound from LA via Liverpool. Based in the latter, Guro, Rich and Luís have a mix of funky guitars, Beatles-inspired hooks and daydream harmonies up their sleeves.

The slow, lovesick shuffle of Utmost Good is a lo-fi soul-rock sound and their own haunting harmonies are akin to bands like Metronomy and Haim. The strength of the tracks on offer online, however, hints that All We Are could carve a path of their own. Anyone that describes their sound as "the Bee Gees on diazepam" is certainly worth a listen. Catch them on tour in March.

? Another hotly tipped act, Years & Years, has been described as '90s R&B left out in the Ibizan sun. In the running for the BBC's Sound of 2015 list, the Londoners' singles Take Shelter and Desire have futuristic synths, bouncing steel drums and addictive pop melodies peppered with soulful yet innocent vocals from lead Olly Alexander, who abandoned acting to conquer UK dancefloors with mates Mikey and Emre. With the current buzz around them and anticipation of their album, look forward to futuristic and more mature dance music coming out of your speakers. Years & Years begins its UK tour in February.