Capital in the 21st century by Thomas Piketty

Capital in the 21st century by Thomas Piketty 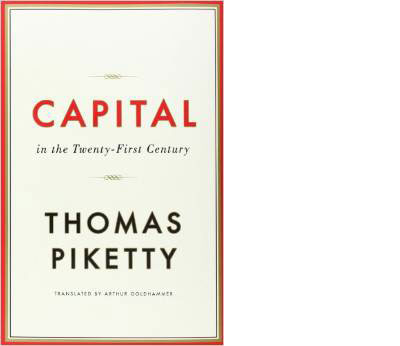 Focusing on wealth and inequality, its main thrust is that inequality is a product of capitalism, and the unequal distribution of wealth causes social and economic instability. The book reached number one on The New York Times bestselling hardcover nonfiction list in the list dated May 18, 2014, and has courted much scrutiny, critical acclaim and controversy.

The dust cover tells us that Piketty's magnum opus is a "work of extraordinary ambition, originality and rigour." A work of extraordinary ambition it certainly is: he sets out to explain the root cause of global inequality and to propose a way of dealing with it. It is also original: he amasses amazing quantities of empirical evidence for his argument, and his explanation of inequality is both original and appealing. But rigour? In places, the connection between the data and the argument is tenuous. His explanation of inequality is convincing more because it makes sense than because the data show it.

At first sight, the data do seem to lend credence to his argument. Defining r as the rate of return on capital and g as the rate of growth, he states that inequality (as measured by the scale parameter of a Pareto distribution function, which is often used for distributions of wealth or income) is a monotonically increasing function of r - g. This seems to make sense; the return on capital benefits the wealthy, while the rate of growth is less discriminating. But he doesn't use the Pareto scale parameter to demonstrate how his data support his conclusion. He does adduce evidence to show that, during periods in which r - g has been large, inequality has increased. During the 20th century r - g was largely negative and inequality decreased. However, as he himself observes, both effects may be ascribed to the disruption from two world wars. This means that the relationship between r - g and inequality is not necessarily direct. He states that r is "distinctly and persistently greater" than g. His own data show that this was not true for the 20th century.

Another problem that arises from his emphasis on upper percentiles is that it focuses attention on wealth rather than poverty. The problem of inequality arises from relative poverty. While excessive wealth is part of the problem, it is only part of the problem. When he turns his focus to dealing with inequality, he comes up with a tax on wealth. That would certainly help to decrease excessive wealth, but unless there is a concomitant redistribution of wealth to the poor, the problem of inequality remains. Piketty makes no proposal as to how to spend the revenue from the tax he proposes.

Even though Piketty disregards environmental and resource constraints, he forecasts growth rates of world output reducing to less than 1.5% by the end of the 21st century. In fact he regards these growth rates as 'optimistic'. The implications for actuarial science are important.

The growth rates he projects apparently fail to take into account the planetary limits to growth, the effects of climate change and the problem of finite resources. A research project recently completed for the Institute and Faculty of Actuaries, Resource Constraints: Sharing a Finite World: Implications of Limits to Growth for the Actuarial Profession, suggests that, allowing for resource constraints, and assuming business as usual, annual real returns on the market portfolio would reduce to 0%. The implications for actuarial science are dire. In Piketty's language this means that r = 0. In order to reduce inequality we require g < r.; in other words, in the language of ecological economics, we need 'degrowth'.

As Piketty suggests, gross national product is a better indicator of human well-being than gross domestic product. But even GNP doesn't really measure human well-being. The problem with focusing on growth is that it is largely fuelled by debt. We cannot get off the bandwagon of debt-fuelled growth without collapsing the system. Humanity's ecological footprint is already 1.5 planet Earths. Ideas such as the sustainable steady-state economy proposed by Herman Daly and others (for example Beyond Growth) need to replace the focus of neoclassical economics on GDP.

Piketty has done a great job in focusing our attention on the problem of inequality. He has certainly stimulated debate, and his work is a substantial challenge both to economists and to actuaries. The challenge to actuaries is to start taking seriously, both in our practice and in our education system, the new voices in economics. We can contribute to the development of measures and models that may be used to hold entities accountable for their environmental, social and economic stability. And in our modelling of the assets and liabilities of financial institutions we need to bear in mind that the future will not look like the past.

Rob Thomson is a professor emeritus at the University of the Witwatersrand in Johannesburg. He is a co-vice-chair of the Resources and Environment Working Group of the International Actuarial Association.

Like 'A short history of time' by Stephen Hawking, I suspect this bestseller is more bought than read. The author is a French economist who believes economics should be studied as 'political economy' rather than as a science. His 'de Gaulle-like' anti-Americanism comes across inter alia in disdain for American economists, not least "for their immoderate use of mathematical models".

This is a very long tome, 80% of which is a detailed, and admirable, collection of data and wealth over two centuries, though the Financial Times has recently expressed doubt on the analysis. Primarily, this relates to France and Britain where the data is best. Unfortunately, it is repetitious and a second edition could be a lot shorter.

In the 19th century, wealth was concentrated in land and the owners did not need an income other than from their assets. This is illustrated with quotes from Balzac and Jane Austen. Then the Industrial Revolution transferred wealth but with no less disparity in ownership. Two world wars in the 20th century destroyed a lot of private wealth until, to the author, the distasteful Reagan and Thatcher policies released individuals to accumulate billions. The Digital Revolution seems to have passed Piketty by, other than the large amount of data in his online technical appendix. Nor is the widespread kleptocracy in Russia and Africa properly acknowledged.

Wealth outside the communist totalitarian states is almost wholly owned by the private sector. Government debt offsets state-owned assets in the 'capitalist' countries and such debt is owned, ultimately, by the private sector.  1Piketty is clear: "Make no mistake: I have no particular liking for public debt."

His conclusion, from his analysis and assumptions as to the future return on capital r and economic growth g, is that the concentration of wealth in the top percentile and centiles will continue to increase over the 21st century unless political action is taken. His two principal arguments for this are based on the relationship r ? g and a concentration of inheritance.

If this relationship persists over time, the owners of capital obtain returns greater than their need to spend and their capital increases. The more wealth you have, the higher return you can achieve. This is demonstrated by looking at the endowments of US universities. So again the rich get richer. Ultimately there will be some form of revolt against this position.

Inheritance adds to the issue as increased longevity means an increase in wealth at death. Hence, because the generation following the baby-boomers is smaller, they will be richer. Perhaps at the top this works but for most in the second to fourth deciles of wealth ownership, care costs will exceed income and wealth will decline with age. Willetts 2 argues baby-boomers will 'eat their house' in consumer spending and long-term care costs.

However, his analysis suggests sovereign wealth funds could change the picture, with the oil exporting countries ending up owning the world.

"The right solution is a progressive annual tax on capital." Piketty acknowledges that because capital is mobile, this does not work unless it can be worldwide, and that is impossible. But he does think the European Union should introduce such a tax, albeit that would require political union as well as Euro union. But whatever he wishes, the European Socialist Republic will not happen in the 21st century.

Piketty would also like to see a significant one-off tax on wealth, which would be used to reduce government debt. Actuaries' eyebrows will be raised by his assertion that if government borrowing is constrained to 1% p.a. while GDP growth is 2% p.a. the ratio of debt to GDP will fall 20 percentage points over 20 years. Statisticians will be surprised to see time series described as following a "bell curve".

Fortunately, Piketty concludes "All of my conclusions are by nature tenuous and deserve to be challenged".

By all means buy the book to impress your friends and colleagues but like A Brief History of Time, it is best left on the bookshelf, unread. Read Willetts instead.

Ian Reynolds is an ex-council member of the Institute and Faculty of Actuaries, former investment manager, and now serving as a non-executive director.

1 Some 30% of US treasury stock is owned by foreign governments of which the largest share is the Chinese holding.