Seeing What Others Dont: The remarkable ways we gain insights 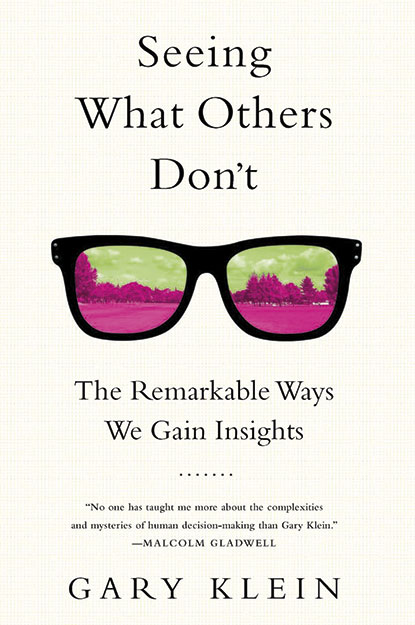 This book is a timely contribution to a growing book list asking professionals to think radically about the way they work.

The beginning is enticing, peppered with several stories about the development of individuals' insights. The ending is a useful summary of the key points and the evidence is in the intervening chapters. The numerous examples of insights, strategies for gaining them, and the reasons insights get stifled at both individual and organisational levels, are effectively covered in the book. However, we feel that the call to action could be stronger.

Nevertheless, for those who want to improve their personal and professional performance, this book is a subtle call to be mindful about what is happening around us and to stay curious and broad-minded. It makes a good case for taking responsibility for shifting our way of seeing one another, our organisations, and ourselves.

Klein explains insight as the discovery of new patterns, in contrast to intuition, which he defines as the use of patterns that have already been learned. Right from the beginning of the book he shares samples from his collection of diverse stories that led to his study of how people develop insights across various industries, such as the police service, financial services, science, and so on. This allows the reader to very quickly grasp the practicality and impact that can be attained from the realisation of insights.

Klein incorporates insight into an equation on performance improvements, as follows:

He says that we tend to look for ways to eliminate errors, but eliminating all errors does not equate to the creation of insights. He believes that expending too much energy on eliminating mistakes could actually hinder gaining insights.

Klein provides a narration of his attempts at demystifying the insight-gaining process, recounting the stages and steps involved in his research study. While considering the circumstances of individuals gaining insights, he took an interest in looking into similar individuals who received the same information but did not gain the same insight. He found that insights involve changing core beliefs that people hold, leading to abandoning or replacing initial beliefs. These shifts, he describes, as "discontinuous discoveries - arising from unexpected transitions from a mediocre story to a better one". An example of this is Harry Markopolos examining Bernie Madoff's investment returns, and immediately recognising that the "numbers made no sense". Eventually, Madoff's Ponzi scheme came to light, years after Markopolos had tried, in vain, to convince the relevant regulators of his suspicions of fraud.

Klein comes up with five strategies for gaining insights: connections, coincidences, curiosities, contradictions and creative desperation. He initially categorises his sample of 120 examples in these five categories, explaining the key concepts associated with each strategy. Later on, his exploration of the inter-relationship and non-mutual exclusivity amongst these strategies reveals a layer of complexity that perhaps the reader could have benefited from seeing earlier on.

Klein formulates a Triple Path Model, constituting a re-grouped set of three strategies: contradiction (finding an inconsistency); connection, which includes connections, coincidences and curiosities (spotting an implication); and creative desperation (escaping an impasse). Each of the three triggers leads to a different activity: using a weak anchor to rebuild the story; adding a new anchor; and discarding a weak anchor, respectively. All of these activities then lead to an outcome, resulting in changes in our understanding and how we then act, see, feel and desire.

Building on previous research, Klein offers an expanded theory for developing insights, which has very practical implications. Think of the Triple Path and the inter-relationship between the strategies. The reader can reflect on which path (s)he has mostly travelled, and how this process has worked out. What would (s)he do differently after reading this book when in a similar situation again?

Klein discusses the role of psychoanalysis, which has traditionally been the domain for the development of insights, and positive psychology, which is advancing a strengths-based model for understanding behaviour. Making the connection with positive psychology advances the idea of building and creating rather than deconstructing and potentially leaving a void in one's thinking.

Klein writes four reasons for stifled insights: gripped by flawed beliefs, lack of experience, passive stance and concrete reasoning. He suggests thinking about whether and how much one should trust data over theories. We have to be careful of flawed beliefs anchoring our understanding, such that anomalies are explained away rather than investigated.

Regarding organisations, specifically, Klein discusses traps that obstruct insights. The first of these is the predictability trap, where wanting a project to be completed on time and within budget means being intolerant of disruptions. Alternatively, as Klein says, "Insight is the opposite of predictable. Insights are disruptive." The second is the perfection trap, whereby striving for an absence of errors and thus taking actions to reduce errors and uncertainty can get in the way of insights. A third trap is the Einstellung effect, which is concerned with the negative effect of previous experience and habit when solving new problems and thus failing to think about possible better methods."

Finally, Klein touches upon how we can foster insights. After building such a compelling case for the development of insights, Klein's call to action could have been stronger here. He has a few suggestions based on strategy groupings he describes earlier. He talks of a "tilt reflect", making better use of contradictions so as to use confusion, contradictions and conflicts as springboards for insights. He also mentions "swirl", as in several ideas swirling around and thus making accidental linkages. Another method is critical thinking, and here he looks at how the management process with its emphasis on controls and error reduction is at cross-purposes to the development of insights in organisations. Klein questions the benefit of listing all assumptions and analysing work in great detail. In this respect, however, actuaries may wish to disagree to some degree as we recognise the value of detailed work. Klein talks about "the pause that refreshes", for example, the value of incubation in letting the subconscious mind work by taking a break from focused mental effort on one problem.

This book helpfully highlights the difficulties with gaining insights, acknowledging that it is possible to come to erroneous conclusions that may feel like enhancing insights. There are limitations of data and testing; therefore, caution has to be exercised in how much to trust the available data. This must be balanced with not discarding anomalies and outliers that may, in fact, be the most important data points.

One valuable point that Klein makes is around being careful not to edit away and dismiss an employee's insight at an early review stage, thus losing it for others' consideration. He suggests that an oversight group could be set up to have transparent discussions on insights and decide which ones to pursue, rather than an employee's proposal being rejected early on by an especially risk-averse manager who wishes to maintain the status quo.

The increasingly complex, competitive, and rapidly changing business environment requires an organisation to manage its risk. This is an issue that is critical for leaders to consider in decision-making. At the same time, being competitive means being able to innovate, also an issue which is imperative for leaders, and contingent upon the development of insights. Klein clearly articulates the challenge of getting the interplay right, and highlights, "There is little point in increasing insights or making them more visible if the organisational leaders aren't ready to make any changes."