The End of Ethics and a Way Back: How to fix a fundamentally broken global financial system by Theodore Roosevelt Malloch and Jordan D Mamorsky

The End of Ethics and a Way Back: How to fix a fundamentally broken global financial system by Theodore Roosevelt Malloch and Jordan D Mamorsky 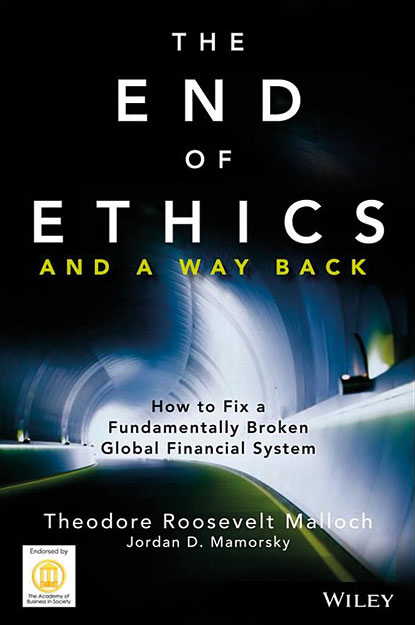 At the heart of this book is a reminder of what happens when people with influence allow themselves to ignore the unwritten rules on which most economies - and indeed societies - are based. As a foreword, the authors use a speech by Sir John Marks Templeton in which he connects economics to one of the most essential of these rules: a sense of fair play. While Templeton goes on to discuss economic manifestations of several vices and the importance of certain virtues, the majority of this book is given over to the behaviour of key individuals at the heart of some of the most sensational financial scandals in recent history.

In a series of brief stories under the heading 'Economic vice', the authors examine the rigging of LIBOR, the demise of MF Global, Lehman Brothers, Bear Stearns and Tyco, the rating agencies' conflict of interests, the Madoff and Petters Ponzi schemes and the fraudulent accounting behind WorldCom and HealthSouth. Each of these stories is a mix of the basic facts of the case and its impact on stakeholders with brief biographical details, anecdotes and speculation on the motives of some of the key individuals involved. These do make interesting reading - even in cases where most readers will be familiar with the details.

Setting aside the somewhat judgmental tone of the authors' analysis, a repeating pattern is evident in these stories. Most of the people involved do not appear to have set out to create disaster for others, or even to enrich themselves at others' expense. But they encountered a vicious cycle of success, opportunity, increasing sense of entitlement and temptation to take risks. It is difficult to empathise with these characters - as few of us have been in similar circumstances. It is equally difficult to know if different individuals would have behaved differently.

Taking just the LIBOR story as an example, the authors illustrate two fundamental problems that explain the need for regulation in the financial markets. The first, more obvious, problem is human beings find it too easy to ignore broader negative consequences in favour of a positive response in their immediate environment. This is not just about short-termism: the negative effects can be simultaneous but hidden from the protagonist; the more immediate concern could be defensive or a desire for gain. The second problem is the need - practical and psychological - for the many to trust the few when it comes to the operation of markets. At least one person responsible for regulation suggested... "it wasn't wrongdoing. It was a market that was dysfunctional". This is possibly why the authors' practicable - or not - suggestions require stronger regulation and governance.

That the second section is about a quarter of the length of the first is rather telling, since this section contains the authors' recommendations for addressing the problems illustrated in the previous eight chapters. Not only is this part of the book sadly short, but its most concrete ideas are for changes in the written rules: those that govern behaviour in financial markets and those that prescribe the powers and responsibilities of regulators.

There is a critique of Dodd-Frank against what it promised on enactment - set against brief suggestions for 'saving' the Securities and Exchange Commission that lead on to a call for broader regulatory reform. Although focused on US markets, the reader can easily see more international application. Nevertheless, there seems to be nothing new - just more of what the authors perceive to have been effective oversight.

There is some hope, though: an appeal to leaders to set the right example is accompanied by a reminder that those leaders only reflect the expectations we collectively set. If we are to return to a state of ethical behaviour, less economic risk and fewer cases of individuals destroying the wealth of many, we must take a look at ourselves, revise our expectations of easy consumption and challenge our leaders to take a longer-term view of the consequences of their actions. In that conclusion, this book fails to tell the reader anything most of us have not already worked out.