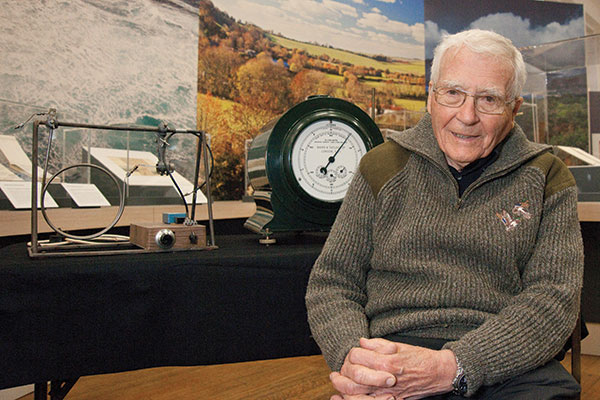 James Lovelock stands before us at the entrance to the Science Museum, where he is being honoured in an exhibition devoted to his 70-year career.

He is most famous for his 'Gaia' hypothesis - that the Earth is a self-regulating living entity - or as the inventor of the electron capture detector - aiding the detection of chlorofluorocarbons (CFCs) in our atmosphere.

If you are unaware of Lovelock, the man the Irish Times called "the most influential scientist and writer since Charles Darwin", then a visit to the Science Museum's exhibition is a good starting point. Unlocking Lovelock: Scientist, Inventor, Maverick is dedicated to celebrating his life and work and is timed to coincide with the publication of his new book A Rough Ride To The Future.

Born into a working-class family in 1919, throughout much of his school life Lovelock was a self-professed reluctant pupil, later gaining employment while studying in the evenings at Birkbeck. His lack of adherence to one single science subject prevented him from becoming over-specialised, and aided the fiercely independent and free-thinking spirit that endures today.

Despite having worked for organisations such as NASA - on its planetary exploration programme - and a number of academic establishments, he has always remained a feisty critic of the current scientific and 'green' agendas, both political and societal. He is content to take on the scientific establishment, pointing out the limitations of modern science he believes to be more often compromised by financial motivations. Scientists today, he says, work on specific problems rather than seeing the bigger picture or thinking outside the box. Lovelock doesn't recognise the box, and is therefore labelled a maverick. Yet his radical theories divide the scientific world.

It is the Gaia hypothesis that is both hugely influential and controversial. While there are many doubters, it has shaped how environmental scientists view issues such as climate change. First formulated in the 1970s, its main purport was that the earth was a complex system able to self-regulate and maintain the conditions for life on the planet. It highlighted the effect of the biosphere and the evolution of life forms on the stability of global temperatures, the amount of oxygen in the atmosphere, ocean salinity, and other environmental variables affecting the habitability of the earth.

It is a theory that has clearly stirred many into discussion and action from Christian theologians to new-age groups. Lovelock admits to being astonished by the correspondence he received from various religious bodies, who viewed his theories as reinforcing their belief that Gaia was an example of God's creation. The adoption of Gaia by the new-age movement he found less appealing, as it proved no help in his battle with scientists on the validity of his theories.

The exhibition offers an insight into Lovelock's personality, inventive mind and unconventional ideas in a career that has spanned such diverse fields as environmental science, medicine and space exploration. Many of his inventions, his scientific notebooks, his surprisingly average school reports, and an array of James Bond-style stories are all on show.

One of the most talked-about items on display is the electron capture detector, invented by Lovelock from home-made tools during the 1960s.

It analyses microscopic gases in the Earth's atmosphere including those responsible for pollution. When in use, gas particles are passed through the device, capturing some of the electrons. As electrons are emitted, they generate a current for which the components of the gas can be identified. This ingenious device helped Lovelock raise awareness of the damages from halocarbons - a cause of air pollution and depletion of the stratospheric ozone - that environmentalists and climate change experts are so concerned about. The electron capture detector is now commercially developed and widely used by various industries.

Lovelock is highly critical of the current environmental and political agendas being played out in the media. A keen advocate of nuclear energy, much to the dismay of many environmentalists, he stresses the urgency in adopting nuclear power to alleviate the fierce changes in global warming. He has stated previously "we have no time to experiment with visionary energy sources; civilisation is in imminent danger". When critics argue that nuclear power is not cost-effective when you factor in the building and maintenance of power plants, Lovelock responds that "nuclear energy is only uneconomic when huge false safety restrictions are applied by legislation, as they are in the UK".

He is particularly damning of Tony Blair and New Labour's "disastrous" efforts to tackle climate change and cement its nuclear policies in the mid-2000s. When pressed on whether he sees the media and public opinion eventually changing to accept the use of nuclear power as an alternative source of energy he nods, adding "it is inevitable - we have to be pragmatic about it". He adds: "There has been an immense amount of adverse publicity against nuclear energy. I often wonder where the funds come from that support the vast number of column inches spent decrying nuclear."

Lovelock is not against the development of renewable energy, but he does not believe it will fill the gap in our energy requirements. He believes there is a good future for tidal power "but it will not be available soon enough for our needs". He also sees fracking as a useful interim energy source.

Instead of focusing all our energies on the planet, Lovelock believes we should put our efforts into adapting the way we live to cope with changes in the climate. The best way our descendants can survive, he suggests, is to keep Gaia going in electronic form. Mankind, as a carbon unit, would find it impossible to live on for many more millions of years owing to the Earth warming, making it uninhabitable for biological life. At this point, Lovelock's theories sound like science fiction. Yet the development of hearing aids, artificial limbs and pacemakers with electrical impulses are now commonplace. It could be argued that this symbiotic relationship has already begun.

In taking our leave, we asked how it felt seeing his life's work laid out before him. Was it satisfying, or was there more to come? He shrugs: "I never really had a plan, I would just get pulled into projects that interested me." For now, he says, he is content to just relax and take some time out.

Those who are familiar with Lovelock's work may find his new book a worthy read. Once reviled, his ideas are now accepted as part of the overall discussion on the future of mankind and the planet. His theories offer a controversially bleak future. Yet he balances his doom-laden assumptions with survival. He believes humanity will survive, in one form or another, as it will simply be another stage in our evolution.

Unlocking Lovelock: Scientist, Inventor, Maverick is at the Science Museum, London, until 9 April 2015