Arts: Facing up to our prehistoric past 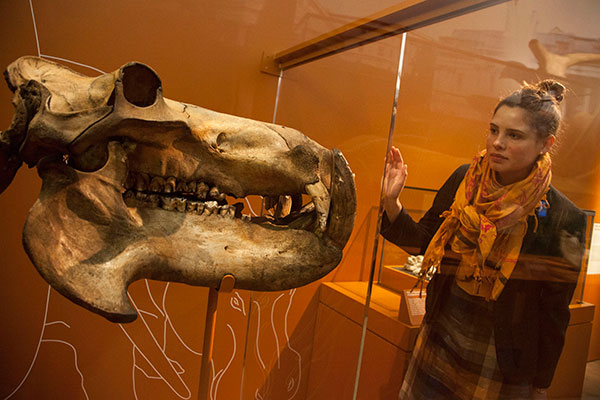 The past is meant to be a foreign country, but the latest exhibition at the Natural History Museum brings it home. 'Britain: one million years of the human story' examines life here in the Pleistocene Epoch, and does

it in a thought-provoking and somewhat disconcerting way.

On entering the exhibition, you come face to face with four human head casts showing the early human species of Homo antecessor, Homo heidelbergensis, Homo neanderthalensis and the successful and familiar Homo sapiens.

Homo antecessor were some of the earliest humans in Europe - remains have been found in Spain from 800,000 years ago. The exhibition includes a video about fossilised footprints found in Norfolk last year after coastal erosion. Heroic scientists are shown frantically trying to keep the area clear of sand and water while battling harsh elements, and it soon becomes clear why this is so important.

Within two weeks, the tide had eroded the footprints entirely. But thankfully there had been time for them to be mapped on 3D photogrammetric images. After analysis, the weight and height of the wanderers were found to correlate with estimates for Homo antecessor.

A small family group of humans left these traces behind some 850,000-950,000 years ago - way before we Homo sapiens 'rocked up' in England, which was around 40,000 years ago. Stone tools found in the same area were shown to date from 900,000 years ago, suggesting that Homo antecessor is likely to have been the first human species to enter Britain. These finds are the earliest evidence of human occupation north of the Alps and the oldest human footprints to be found outside Africa. So worth getting a bit wet for.

At this point, Britain was connected to mainland Europe and the footprints would not have been left at the coast at all, but along the mudflats of a large estuary. It's likely this would have been the Thames, which in those times meandered north. Indeed, one interesting element of the exhibition is the rendering of how the map of Britain has changed over thousands of years, from being at one with Europe, to being covered in ice, then, in the wake of enormous glaciers, being cut off from mainland Europe. During these times, it seems that humans inhabited Britain eight times, being pushed back and forth by ice ages. The ninth time humans stayed, and we are still here.

Fossil evidence of a leg bone and two teeth show that around 500,000 years ago, Homo heidelbergensis was living in Boxgrove in West Sussex. Hand axes and other stone tools of this species have been found scattered around Britain.

With strong brow-ridges but relatively large brains these were talented hunters, skilfully butchering large mammals such as horses, deer and even rhinos. There is an amazing array of finds showing the tools, bones and other remains from this time and interesting stories on how they were dated.

A blue corridor representing an ice age 450,000 years ago leads to a room with a backdrop of Trafalgar Square, which is where a huge tooth was dug up in the 1950s. This illustrates a period in Britain when hippos would have swum in the Thames (now settled in its proper place) during a warmer period in a Britain cut off from the mainland - and from humans too.

The next room shows some amazing finds from the later return of the humans. As time goes on, it didn't necessarily mean that man became more civilised, however. Gough's cave in Somerset has been a rich source of finds that show cannibalism clearly went on and the humans who lived there made skull cups as well as leaving sophisticated weapons such as harpoons made of antlers.

For a long time it was thought that while we are descended from Homo antecessor (as the name would suggest) and Homo heidelbergensis, Homo sapiens had not much to do with Homo neanderthalensis.

So the middle of the exhibition, and arguably the highlight of it, comes as quite a revelation. There stand two amazingly lifelike figures. So lifelike, that my six-year-old daughter exclaimed loudly: "Why has that man got no clothes on?" These are Homo sapiens and Homo neanderthalensis. Commissioned by the museum, they are works of art in themselves. The head of human origins at the museum, Professor Chris Stringer, even declares: "My personal highlight was working with reconstruction artists to create the most lifelike and scientifically accurate Neanderthal and Homo sapiens models ever made."

Genetic data from fossils now suggests that Neanderthals shared a common ancestor with our species, likely to be Homo heidelbergensis. In 2010 around 60% of the Neanderthal genome was mapped and, on comparing it to modern humans, it was found that people in Asia and Europe have around 2.5% Neanderthal DNA in their genetic code.

A video shows how celebrities and experts such as Bill Bailey, Clive Anderson, Alice Roberts, Maggie Aderin-Pocock, Sian Williams and Kevin Fong agreed to have their DNA tested to see what the results reveal about their genetic origins. Aderin-Pocock, a space scientist of African descent, has no Neanderthal DNA whatsoever, while the others have varying degrees of it. Roberts, an anthropologist and TV presenter, has the most, at 2.7%.

Certain traits such as light hair and eyes, and even illnesses such as type 2 diabetes and Crohn's disease are likely to be a result of Neanderthal DNA. Neanderthals were also paler, to take advantage of getting more vitamin D from the sun in colder climates.

All in all, this is a fascinating exhibition that will leave visitors pondering the things they've seen for many years to come.

Britain: one million years of the human story is at the Natural History Museum, London until 28 September 2014