The Banker's New Clothes: What's wrong with banking and what to do about it by Anat Admati & Martin Hellwig

The Bankers New Clothes: Whats wrong with banking and what to do about it by Anat Admati & Martin Hellwig 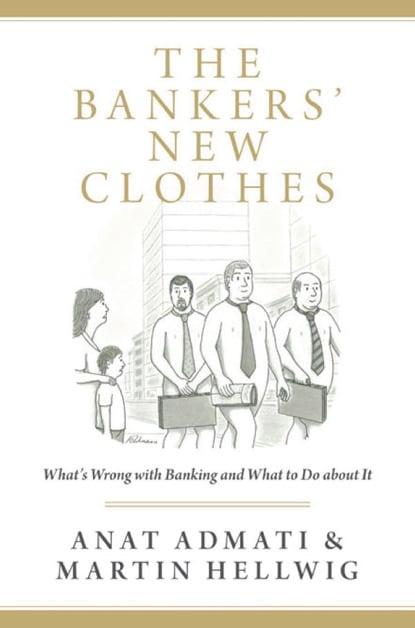 It is fairly obvious from the title of this book that it's not going to be full of praise for bankers. That would be an understatement. A persistent theme throughout the book is that bankers mislead the rest of us about what's involved in banking and basic financial concepts. But the main message is even simpler than that - if banks were more highly capitalised, they would be less likely to fail, and, importantly, there's no good reason why they shouldn't be. It's not a subtle message on the face of it, and you might wonder whether it's enough for a whole book. It is, for two reasons.

First, a surprisingly large part of the book is taken up with a very clear explanation of what capital is and how it works. There's a simple example - Kate, who borrows money in order to buy a house - which is gradually elaborated on to illustrate a range of different concepts, including leverage, guarantees and return on equity. This performs the useful function of bringing us back to basics: capital (or equity) is the excess of assets over liabilities; it really is as simple as that. Well, only slightly more complicated - it's what the excess of assets  over liabilities would be if the accounts were realistic. The book does a reasonable job of pointing out that different accounting treatments can radically affect  the answer.

Second, there's a lot of emphasis on debunking the argument that banks are different, and that the usual rules don't apply to them. This is where the book's title comes from. It's this second aspect that is, in my view, the more important part of the book; it's also, unfortunately, weaker than it should have been.

The authors take the overall line that banks aren't really different from any other company. High levels of leverage may produce high rates of return, but they also mean higher risk. More capital means a bigger buffer. It's really not rocket science. The problem is that the villains of this piece, the bankers, dress it up as if it is rocket science, and confuse what's going on as they do so. For example, the authors point out that bankers talk about holding capital: "Apple and Wal-Mart are not said to 'hold' their equity. This is not a silly quibble about words. The language confusion creates mental confusion about what capital does and does not do."

This is, on the whole, an effective line of argument, and has strong resonances. It would be even more effective if the authors took some of the bankers' positions a bit more seriously, and went into more detail about why they think that way rather than simply pointing out how misleading some of their statements are. After all, there are some bankers both smart and honest, so presumably there's some intellectual backing to their reasoning. It would have been good for that to be exposed and subjected to rigorous analysis.

But the book's emphasis on the basic similarity of banks to other enterprises is important. So often, in many different contexts, we hear the cry from vested interests "but you don't understand, we're different because" Nearly always this precedes a plea for special treatment - not only are they different, but different in a way that makes life harder. We should distrust this line of argument. Exceptional treatment requires exceptional justification. Exceptions introduce complexity, which results in unintended consequences. That's not to say that exceptional treatment is never the right thing, but if the whole edifice becomes so intricate that it's incredibly difficult to explain to a slightly sceptical intelligent lay person, there's a definite suspicion that it's built on sand.

There's another way of looking at this. Banks are indeed a special case: they are a major source of systemic risk in the global financial system. They should therefore be at least as safe as non-banks, and should be capitalised at least as highly. This isn't an argument that's often heard from within the banking community, or indeed elsewhere, which is why this book is important. Even with the recent proposals for tougher capital requirements on banks, we aren't seeing proposals for capital levels of 20% to 30% of total assets, which is what the book recommends. Now that's something to think about.