Xin Jin immerses herself in the wonderful world of Punchdrunk, and has a tip for a future West End hit 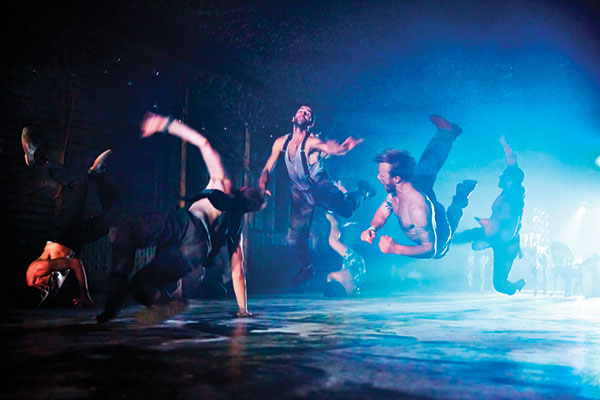 Masks, dark rooms, smoke. No, it's not a scene from Eyes Wide Shut, but the latest, much anticipated theatrical adventure presented by Punchdrunk and the National Theatre.

The concept of interactive theatre isn't a new one - we see it on the streets of London's Covent Garden every day. However, and it is a big however, Punchdrunk has taken it beyond the horizon. It is a tale of the dark side of the Hollywood dream, where fantasy is sharply at odds with reality.

The set is a disused postal sorting office next to Paddington Station. The set designers have gone to great lengths to transform the vast space over four floors into an American film studio, with its own wardrobe, make-up departments, research area, and, most important, a cash bar.

The ingenuity of the use of space is that even though you are exploring a film set, you can't help but notice the attention to detail from the designers. So much so, that each room feels more like a piece of installation art.

Your wanderings will take you from a line dance in a Southern bar to the middle of a space adventure on the red planet. Where you end up and what you see is the result of the choices you make when you step into the world of The Drowned Man.

Love, jealousy, paranoia, torrid affairs: all themes to discover as you move from room to room. The producers have cleverly given you just enough hints to get a flavour of the story. However, it is up to you to piece together the whole story. This is difficult given that the narratives are being performed simultaneously over the three floors by a vast cast and that some of the actors change characters and come back in other roles. It is possible to

grab a fuzzy comprehension of the central story, but to understand the sub plots is a much tougher task. This doesn't detract from the finalé, which is powerful and moving.

Make sure you stay until the end for it.

More than anything else, The Drowned Man is a theatrical experience like no other. You are allowed to roam from floor to floor. You can follow one character and watch their whole tale unfold - although if you are going to do this, be quick, as they can be very sly! Or you can stay in one space and wait to see what happens next. The choice is entirely yours. This is both empowering and frustrating; you have the freedom to explore whatever you like, but you are also left with the knowledge that you may have missed out on something.

This is a show that is worth seeing while you get the chance. Even though the performance lasts for up to three hours, it is by no means a passive experience, and you have to be fully prepared to take in the surroundings to make the most of the show. A limited number of additional £19.50 concession tickets for anyone under the age of 26 are released for sale on Mondays for performances the following week.

Another show I would recommend keeping your eye out for is The Color Purple. It has just completed a summer run of sold-out performances at the Menier Chocolate Factory, and is based on the novel by Alice Walker. The production is the perfect blend of music and storytelling. Cynthia Erivo, who plays Celie, has such a presence on the simply designed stage. She even received a standing ovation in the middle of the production. It would be such a shame if this doesn't transfer to the West End.