Alvin Kissoon reviews the latest offering from Matthew Bourne, one of the UKs most popular choreographers 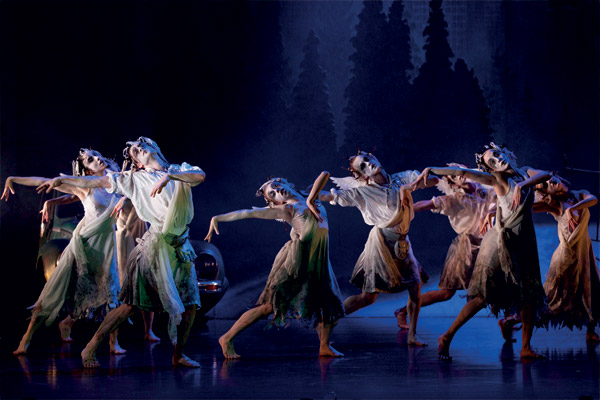 It is 25 May 2013, the night of the Champions' League final, but I'm forgoing this to see Highland Fling, a contemporary reworking of 19th-century Danish choreographer August Bournonville's ballet La Sylphide, at the Festival Theatre, Edinburgh. Multi-award-winning choreographer Matthew Bourne originally premiered the performance in 1994, and this 'romantic wee ballet' has been produced exclusively by Scottish Ballet, with the La Sylphide score performed by the Scottish Ballet Orchestra.

This is no traditional ballet. The setting is modern Glasgow, complete with tartan and a Neil Lennon scarf above the door. The story revolves around James, a young Scot who is about to get married. Highland Fling opens at the stag and hen parties of James and his fiancée Effie at a Glaswegian nightclub. James encounters a Gothic fairy (the sylph) who then appears to him the next day in his council flat. His love and obsession grows for the sylph and this journey takes him into a forest, where we discover whether his search for true happiness has been successful.

I am a fan of Bourne's work. His reworking of traditional ballets are designed to make them more accessible to the audience, including imaginative sets and contemporary twists. They also leave room for the audience to interpret the performances in their own way. I have previously seen Nutcracker! and Sleeping Beauty and enjoyed both performances - the best way to describe them would be fun. So I am looking forward to his latest show.

Act 1 does not fail to deliver. It is the morning after the stag do, with beer cans, an inflatable sheep and the obligatory male friend dressed in a bra; the mood is filled with touches of humour and there are plenty of laughs from the audience. The scenes with the graceful sylph leading James astray are also fun, as we follow him into his obsession. As the curtain drops, James is fleeing into the city, and I await the second act with interest.

Act 2 is set in a forest with a rusting car and the city lights aglow in the background. A more traditional ballet emerges, with James dancing with the sylphs to a gothic and haunting theme. Following on from the humour of Act 1, this seems less accessible. When the shocking conclusion arrives, it appears out of step with the rest of the act rather than something that has been slowly building.

The performances from the Scottish Ballet and Scottish Ballet Orchestra are very good, and the designs and settings certainly draw you into the scenes. There is a lot to like about this production. The distinction between the styles of the two Acts gives rise to comparisons, and I can imagine the talking point being the difference between them rather than the good quality of the performance as a whole. And, at just 1 hour 35 minutes, including a 20-minute interval, it is much shorter than other ballets.

Overall, it has been a good night and Bourne's productions will certainly be of interest to anyone who fancies trying contemporary ballet. This run of Highland Fling will have ended at the time of going of print, however, Matthew Bourne is showing his interpretation of Swan Lake at the Sadler's Wells Theatre in Islington in December and January. London has an amazing variety of arts events and this is one example of something to look forward to for Christmas. It will certainly be very different to the day job!