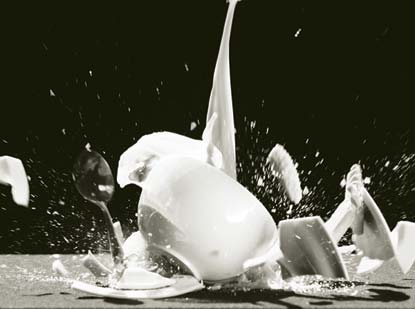 Ingenuous visitors to Istanbul may make the mistake of wandering into (or worse, being ushered into) one of the large carpet emporiums, where, after being seated and refreshed with apple tea and baklava, a procession of impressive carpets seems to fly before their eyes, followed by intense selling. Resistance is countered by a procession of smaller carpets, and harder selling; further resistance, and we see drapes, runners, coverings, spreads, pillows and yet stronger persuasion.

Reading Nassim Nicholas Taleb's book Anti-Fragile is a similar experience: an extraordinary variety of colourful ideas is paraded before us, accompanied by insistent patter. As soon as we pause for breath, Taleb starts the hard sell again, but in a different direction.

Taleb himself describes the work as being not so much one book but a collection of seven, all generally connected by the unifying concept of anti-fragility. The basic idea of Anti-Fragile is this: that in a world where 'stuff happens', it is not enough just to be robust, ie able to survive adverse happenstance; to be successful, systems, firms or individuals need to be 'anti-fragile', by which Taleb means the ability to thrive from events that might normally be perceived as bad.

In discussing anti-fragility and how we can strive to be anti-fragile, Taleb ranges across a number of interesting areas. Non-linearity, asymmetry and optionality feature, of course. But Taleb goes deeper and further, striding across domains financial, sociological, pedagogical, philosophical, medical and theological.

One core problem, in his view, is our assumption that we understand the fields we operate in, and so seek to build predictions from this assumed understanding. Fragile systems need predictions, but predictions in turn reinforce the mindset that leads to the proliferation of the fragile.

The idea that we understand our environment often leads to the notion that we ought to do something, and what Taleb calls 'naïve interventionism' in an economic/political context, or 'iatrogenics' in a medical context (etymologically, 'caused by the healer' - but referring to harm, not cure). In our instant-gratification, rolling-news culture full of 'proactive' decision makers, there is a tendency to do rather than to sit and observe; furthermore, whole managerial or professional bands have a vested interest in activity for the sake of activity.

Hence the problems caused, on the one hand, by the 'too big to fail' institutions accompanied by detailed regulation that misses the point, and on the other hand, pharmaceutical innovations such as thalidomide (an extreme example, but the underlying point holds).

A related topic, particularly with reference to the fragilista's need for prediction and presumption of understanding, is that of data overload and our obsession regarding the need for more data and more data analysis. Taleb contrasts this bottom-up theoretical approach with the top-down empirical approach of finding techniques that work - heuristics - and applying them, without being paralysed by uncertainty as to their theoretical underpin. An amusing example is provided regarding 'green lumber', about a successful trader who knew almost nothing about what he was trading (he thought it was emerald-hued wood) but was very successful given his instinct for the market.

Two chapters I was particularly sympathetic to concerned the general awfulness of novelty for novelty's sake, contrasted with the anti-fragility of what has survived for long periods; and second, the importance of 'stressors' in engendering anti-fragility. At a personal level, Taleb shares my taste regarding violent exercise, fasting and avoiding non-emergency medication; the first two are stressors which help one's health more than regularity would do, while the medical scepticism derives from a concern about asymmetry (in health matters, there is no point risking a large problem for the sake of small gains).

Those of you who enjoy gazing at a variety of finely woven topics, and who can withstand the frequent authorial self-indulgence, are likely to find this book an engaging and thought-provoking read.

Matthew Edwards is a senior consultant at Towers Watson. He is a former editor of The Actuary
Filed in
Arts