From Brixton to Berlin, Natalie Li unravels the many guises of a glam rock megastar 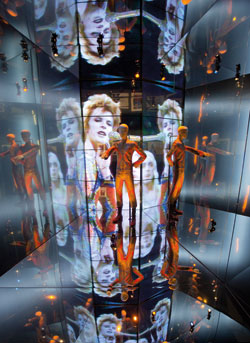 "I was diversifying all over the place," says David Bowie through my headset in one of his interviews as I wander around the Victoria and Albert Museum's retrospective exhibition, David Bowie Is.

His words are an understatement. Bowie was, and is, something to everyone across the globe. Diversifying transformed him into a legend who held power to stir intrigue, shake up the traditional and cause controversy through his music and celebrated style.

My earliest memory is of Bowie walking up those winding, topsy-turvy staircases in the 1986 Jim Henson film Labyrinth. Bowie planted dark and sinister images in my head, resulting in nightmares as a young child. But as I grew older I began to appreciate the bold and innovative Bowie, with all his weird and wonderful eccentricities.

To some, Bowie is the epitome of glam rock pop - a gender-bending mystery who treads a fine and inconsistent line between fantasy and reality. To others he is elusive, complicated and at the moment, an omnipotent music legend.

The V&A offers an extraordinary glimpse into Bowie's glitzy controversial career through this lively exhibition, which transports you into the heart, mind and soul of the freakish pop star who rose to fame after the invention of his spangly, lipstick-wearing stage persona - Ziggy Stardust. Ziggy's androgynous appearance had a powerful influence on pop culture and signified changing times.

"It's taken me a long time to admit, even to myself, let alone you, that it was the vision and not yet the sound that hooked me up," said actress and lifelong Bowie fan Tilda Swinton, in a touching speech at the opening of the exhibition in March. Swinton appeared in the video for Bowie's latest single 'The Stars (Are Out Tonight)'.

Addressing an absent Bowie, she said: "You have remained the reliable mortal in amongst all the immortal shapes you have thrown.

"Yet, I think the thing I'm loving the most about the last few weeks is how clear it now is - how undeniable - that the freak becomes the great unifier."

A great unifier he is too - the V&A sold more than 42,000 tickets before the exhibition had even opened, the fastest-selling exhibition for the museum and a clear testament to Bowie's universal appeal. The exhibition coincides with the release of Bowie's 24th album, The Next Day, after almost a decade of him being out of the spotlight.

It is a privilege to be up close and personal to Bowie's early creative processes, as the V&A exhibition allows us to join him on his epic journey. Visitors can almost crawl into his mind and piece together the stages of his career from his days as scrawny David Robert Jones, born in Brixton, to his transformation into a psychedelic glam rocker.

The journey begins with a display of Japanese designer Kansai Yamamoto's flamboyant striped bodysuit worn for Bowie's 'Aladdin Sane' tour in 1973. As you make your way through the maze of memorabilia visitors will come across scrawled lyrics of the 1972 hit song 'Starman', through to a glittering Top of the Pops stage where Freddie Burretti's Ziggy Stardust jumpsuit shines under the spotlight.

This visual feast is accompanied by Bowie's music, which is endlessly played throughout the exhibition as you weave your way through more than 300 objects on show - an array of handwritten lyrics, original costumes, photography, film, set designs, music videos, Bowie's own instruments and album artwork.

Video installations and innovative floor-to-ceiling set designs wonderfully set the scene for an exciting era of music, and the invention of the pioneering Bowie. A headset plays interviews and songs to match the video footage. The music also plays outside of the headsets, creating an aural overload. It is a chaotic assault of the senses, but this immersive experience gives a sense of his eclecticism and depth.

Co-curator Geoffrey Marsh said the team wanted to "embrace the theatrical nature of the exhibition". It certainly achieves that and much more, citing many of Bowie's influences and collaborations from Andy Warhol and Marcel Duchamp to inspiration from Stanley's Kubrick's 1971 film adaptation of A Clockwork Orange.

Music videos such as 'Boys Keep Swinging' and set designs created for the 'Diamond Dogs' tour (1974) are projected from the walls while album sleeve artwork by Guy Peellaert and Edward Bell fill the exhibition. Other artists such as Gary Kemp from Spandau Ballet offer their thoughts in candid interviews projected onto screens.

Bowie gave the V&A freedom to choose and sift through these objects to create this revealing show. He, however, remained clear of any other input. In fact, on the day the world's press descended upon the exhibition, the V&A's theatre and performance curator Victoria Broackes urged journalists to convince Bowie to come and see it all for himself. Whether he has remains a mystery.

We might not see Bowie in the flesh, but this exhibition certainly allows us to reach the heart and soul of this arguably unrivalled musical genius.