Arts: Alan Turing: beyond the enigma 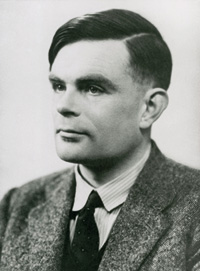 Aside from the film Enigma (2001) and the Robert Harris book of the same name, I'd paid scant attention to codebreakers and Bletchley Park. Even though both book and aforementioned film are highly fictionalised accounts of a young mathematician trying to break the Germans' 'Enigma' ciphers during the second world war, there is little reference to a man called Alan Turing.

Ironically, his story is one that is equally compelling, mysterious and, above all, sad. With that in mind, I set off for the Science Museum in London to see Codebreaker: Alan Turing's Life and Legacy - a special exhibition to mark the centenary of his birth.

Alan Mathison Turing was born in London on 23 June 1912. His formative years were spent in Dorset at Sherborne School, where he became friends with fellow pupil Christopher Morcom - the first in a line of male companions that Turing would become involved with. Their friendship would inspire Turing's lifelong endeavours. However, it was cut short by Morcom's sudden death in February 1930, aged 18, from tuberculosis.

Turing went on to win an open scholarship in mathematics to King's College, Cambridge, matriculating in 1931. He graduated in 1934 with distinction, and was awarded a fellowship in 1935. In 1936, Turing went to Princeton University in the United States, before returning to King's in 1938.

At school, Turing was described as being popular with the boys, but never quite one of them. He was considered an eccentric character, a very reserved sort, although he generally got on well with everybody.

When war broke out, he joined the Government Code and Cypher School at Bletchley Park. Along with another Cambridge mathematician, Gordon Welchman, he designed a new machine, the Bombe; used to decipher Enigma-enciphered messages. It was the work done by Turing and his colleagues during this time that brought cryptology into the modern world. In 1946, he was awarded an OBE for his work there.

Set amid the spectacle of astronauts, rockets, and all things scientific, analytic and mechanically artistic, the exhibition is unassuming. A haunting, melancholy face at the bottom of the staircase beckons you upstairs to a large balcony set aside for this pioneering British figure.

Despite being best-known as a genius mathematician and codebreaker, the exhibition covers many other facets of Turing's life. The area is arranged into six themes: Computing before computers; Turing's war, and his work at Bletchley Park; Pilot ACE - the automatic computing engine; Can machines think?; A matter of life and death; and Programming computers today.

According to David Rooney, curator of the exhibition, the star of the show is the Pilot ACE computer, which, in its day, was the world's fastest computer. It is the most significant Turing artefact in existence and Rooney says it wouldn't be too fanciful to suggest that Pilot ACE was "Alan Turing's mind made into metal and glass valves".

Showcased alongside this is a moving set of archives made available by the family of Christopher Morcom. During their time at Sherborne, it was clear that Turing was besotted with Morcom, and the intensity of the relationship was such that Turing would eulogise his feelings of love and loss in a series of heartfelt letters sent to Morcom's mother in 1930, following her son's untimely death. It seemed their great bond stemmed from the fact that Morcom was someone who took scientific ideas seriously - he may well also have been the first person to take Turing seriously.

During this intense period of grieving, Turing began to contemplate a spiritual existence beyond the body, and he turned his attention to whether machines could learn to think like humans. This idea would stay with him for the rest of his life.

On show at the exhibition is a charming short film, charting the creation by Turing's contemporary, Dr William Grey Walter, of Toby, a mechanical tortoise with an electronic brain that functions like the human mind. His 'magic-eye' head is a photo-electric cell that revolves to find the strongest source of light, to which it is then drawn, negotiating obstacles along the way. Turing knew Grey Walter well, and would later visit the Science Museum to see a demonstration of a pair of Grey Walter's tortoises that reportedly captivated him.

In 1948, Turing began working on a ground-breaking new project, developing mathematical theories of morphogenesis - the development of form and structure in an organism. But only four years later, following a relationship with a local man, Turing was arrested under anti-homosexuality legislation and convicted of gross indecency. Doctors then were experimenting with ways to 'treat' homosexuality, and Turing was given the option of either imprisonment or chemical castration. He opted for the latter.

During this time, he had continued with his research on morphogenesis, as well as advising the government on secret codebreaking projects. However, his security clearance was suddenly revoked and he was put under surveillance. In 1954, aged just 41, he was found dead as a result of cyanide poisoning. The official verdict was suicide, with the coroner adding "his mind had become unbalanced".

Alan Turing is most widely known for his critical work at Bletchley Park during the Second World War. But he was also a philosopher and computing pioneer who questioned and contemplated the fundamental problems of life itself.

His ideas have touched so many aspects of science and technology, including the early days of computer programming, and planted the seeds of artificial intelligence. A great many things we use in our daily life exist as a result of such pioneering work.

It is perhaps ironic then that the Science Museum, with all its celebration of the advances of human endeavour, and its gizmos and gadgets laid out for purchase in the museum shop, owes much to the quiet, unassuming man whose mournful image gazes down from a quiet corner of the balcony.

In a letter to the Telegraph, Stephen Hawking and other scientific luminaries have called on prime minister David Cameron to formally pardon Alan Turing.

Despite a posthumous apology in 2009 by then prime minister Gordon Brown, no official pardon was given. A later appeal was turned down by the coalition government. With a private members' bill drafting new legislation later this year, it may well be that one of the most brilliant mathematicians of the modern era can at last be celebrated without reserve.