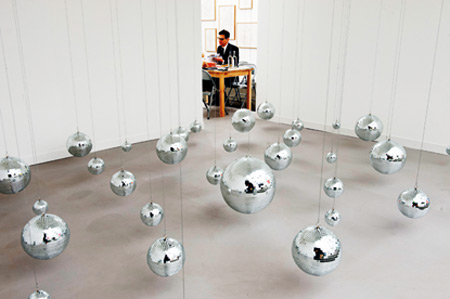 Top international art fairs are showcases for some of the world's most valued contemporary art. But in the modern world that value extends way beyond the aesthetic.

Take, for example, the annual Frieze Art Fair, held each October in a big tent in London's Regent's Park. It represents a meeting point of commerce and culture, as wealth descends upon the parkland. But what should you expect from this interplay between money and artistry, other than an unusually high degree of snobbery and people with an often weird dress sense?

Frieze London is part of a bigger trend, resulting in art fairs across the world: it is a major event, second only to Basel. But there are other important gatherings in locations such as Miami, Hong Kong and New York. - See more at: http://www.theactuary.com/arts/commerce-meets-culture/#sthash.R0dSzHSN.dpuf

In many ways, so much crammed into a tent cannot possibly do it justice. Yet, one would not often have the opportunity to see such cutting-edge work in one place, with some indication of its monetary value, were it not for fairs such as Frieze.

Seeing the overwhelming variety and the enormous range of techniques, media, and concepts on display, one cannot help but wonder how much will still be around in 100 years' time. So the question arises: what is the meaning of all of this, and why spend money on it?

Contemporary art, considered as fine art produced by living artists within the past 60 years, comes with a context and history, as well as a sophisticated system of endorsement and valuation. What art means today is very different from what it meant 100 years ago. At that point, Modernism was in full swing, and the masterpieces of Cubism were already in existence, but an intervening century of abstract expressionism, pop art, op art, conceptual art, performance art, video art, postmodernism, and many other movements and isms, have forever altered what art means and how it is produced.

Ever since Marcel Duchamp signed a urinal and placed it on show in 1917, claiming it was art, the concept of what constitutes art has become more important than the artefact itself. Some artists rebel against this emphasis on concept, while others embrace it to the extent that they produce no art objects at all.

One such artist, Martin Creed, showcased a creative piece consisting of the lights in the gallery flashing on and off. Another exhibit by Tino Sehgal, incorporated a museum guard intoning a phrase over and over again. And so the list goes on.

Other artists, such as Raqib Shaw, Paul Noble and Michaël Borremans, produce the most amazingly intricate drawings, sculptures and paintings, showing superb technique and craftsmanship, easily recognisably by most as a traditional art form.

The contemporary art world has room for all of this. In 2013, there are no movements and battle cries any more, no manifestos produced by Cubists, Dadaists, abstract expressionists, pop artists, and so on. This is a postmodern world, so almost anything can be art - and almost anything is.

However, for art to be valued and recognised, it has to enter a system of endorsement. First, an artist has to find gallery representation. There are, of course, galleries with purely local reputations, and those of international standing. Then the artist's works have to be exhibited in shows, with a solo show having higher status than a group show, and international shows having higher status than local ones.

When the artist's works are acquired by important private collectors, that boosts his/her career further, and then, finally, the ultimate endorsement comes when an artist is exhibited, and finally acquired, by important museums. Inclusion in the collections of top museums, such as the Tate Modern in London, or the Museum of Modern Art in New York, means that an artist has achieved the pinnacle of recognition.

However, even this is no guarantee of immortality: there are many artists whose works languish in the store rooms of major museums. For that what is needed is consistent acquisition by major museums and private collectors over a long period of time and for books to be published on their work. Then all up and coming artists would have to be evaluated against the context created by this artist, in the same way that he or she had to be evaluated against previous artists.

If a consensus develops that an artist has made a meaningful contribution to art history, and the work is already included in major collections, demand grows exponentially. And since supply is restricted to the output of a single artist, prices go up to astronomical levels and the investment value of art enters the equation.

The viewing and acquisition of contemporary art is an intellectual game: an attempt to understand the art of today in the context of art history, to evaluate its emotional charge, including how others react to it, and then to decide whether you want to buy it in the hope that it will eventually be widely recognised for its significance and value. It is an addictive game, but one that can bring immense satisfaction and rewards over time.