Arts: The Dance of Death

Nick Mann contemplates the universal, non-discriminatory element of life. A review of Death: A Self-Portrait by Richard Harris at the Wellcome Collection, London 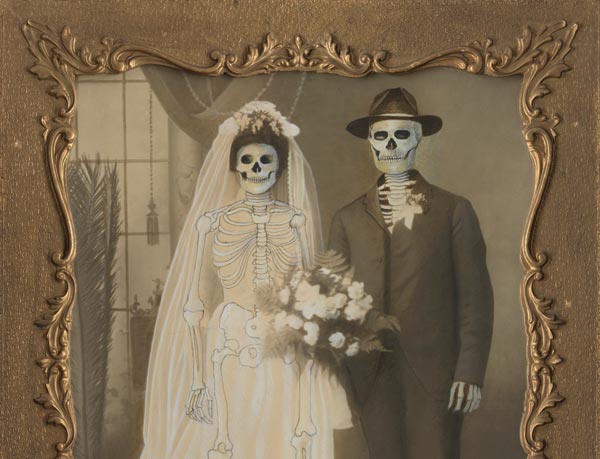 Death, it comes to us all. Perhaps it is that inevitability that explains why, by and large, we carry on our day-to-day lives with little consideration for how and when our lives will end

A unique exhibition at London's Wellcome Collection starkly confronts our often conflicting attitudes to death with over 300 objects ranging from harrowing illustrations of the sheer terror of war, to comical papier-mache skeletons.

The origins of Death: A Self-Portrait are unusual in themselves, with the exhibition drawn entirely from the collection of one man. Richard Harris, a former antique print dealer from Chicago, has amassed around 1,500 artworks and artefacts relating to the theme of death in just 12 years and the exhibition includes works from all corners of the globe, including Tibet, Mexico, India and Japan.

Harris began his collection because of an interest in anatomy, and it's perhaps as a result of this that the human skeleton - and the skull in particular - is present in the majority of the works in the exhibition.

Divided into five rooms, the exhibition splits Harris' collection into clear thematic areas, with the first - 'Contemplating Death' - juxtaposing obvious representations of death with the objects and belongings that we cannot take with us when we die.

As is the case in other parts of the exhibition, the real interest lies in the more quirky, less conventional, objects - in this case, the calendar a chemical company used to market its wares to doctors at the turn of 20th century. The unusual use of skulls in the calendar appears all the more foolhardy with the revelation that compounds in their analgesics turned out to be toxic.

Equally eye-catching is the massive Calavera or skull sculpture (above, right) that dominates the second room, 'The Dance of Death'. By juxtaposing books and shanty towns, this three-dimensional collage by Argentinian collective Mondongo brings together seemingly random objects to cleverly articulate the impact of the traditional dominance of Europe and the US on South America.

It's a long way away aesthetically from the Nuremburg Chronicle, one of the world's earliest printed books. Published in 1493, this thick volume offered an illustrated history of the world, from biblical times to publication, but its relevance to the collection is its use of one of the earliest known versions of the dance of death. The frenetic revelry between skeletons and humans aimed to remind people of the universality of death and to warn them away from excessive materialism or vanity. A Japanese painting from the mid-1800s detailing two frolicking skeletons provides a more irreverent, less weighty take on this theme.

Perhaps the most jarring, visceral reminders of the pain that is so often associated with death come in the works that dominate the exhibition's third room, 'Violent Death'.

Francisco Goya's set of etchings, 'The Disasters of War', will be familiar for many visitors, thanks to the artist's status as one of the last of the Old Masters. They take an often minimalist, stripped-down look at a series of early 19th-century conflicts in Spain, and are particularly effective in showing the impact of war on the family unit.

However, it is the 51 prints from German artist Otto Dix that are really likely to grab the visitor's attention.

As a machine gunner on the Western Front in the First World War, Dix witnessed the horrors of modern warfare first-hand, and his diverse series of etchings uses a variety of styles to articulate the death and destruction associated with one of the most significant conflicts of our age. Grotesque caricatures of dead men's faces provide a grisly, visceral articulation of the loss of life, while shell-shocked landscapes are a further reminder of the remorseless nature of the struggle.

Conflict is also used to bring together the disparate works in the exhibition's fourth room, 'Eros and Thanatos', which aims to articulate the eternal strain between our instincts towards life (Eros) and destruction (Thanatos).

The naked body is particularly in evidence here, not least in John Isaacs' bloody sculpture 'Are You Still Mad At Me'? - offering a brutal dissection of a human body displayed on top of a flight cargo case.

Less gory - but perhaps more disquieting - is 'The Doctor, The Girl And Death' - a semi-pornographic etching by Nazi-sanctioned Austrian artist Ivo Salinger. The work, from 1920, sees a naked young woman in the midst of a struggle between death and a surgeon.

Some of the exhibition's most unassuming - but ultimately most intriguing - objects are found in final room 'Commemoration'.

A series of 'family portraits' by Mexican artist Marcos Raya sees skulls transposed onto otherwise ordinary photographic shots, managing to be both comical and unsettling at the same time.

A similar balance is found in a series of anonymous old photos showing unknown figures posing with skulls and skeletons in seemingly innocuous situations. With the passage of time, what may have seemed comical decades ago has now gained a disquieting feel, serving as yet another reminder that death is never far away.

This room is also home to some of the exhibition's most exotic works, not least an Indonesian grave-guardian or Tau Tau and a series of skulls from pre-Columbus Peru, as well as a wooden mash from Tibet.

At the exhibition's conclusion, there's one final, highly effective reminder of the inevitability of mortality in the shape of a schematic produced by David McCandless to accompany the exhibition. Breaking down the total deaths in the 20th century according to cause, the clever graphic spells out several stark truths for the visitor, not least man's ability to kill other men.

While undoubtedly featuring a host of thought-provoking objects, Death: A Self-Portrait perhaps suffers from the inevitable limitations of being drawn from one man's collection. The attempt to draw the works on show into five clear thematic areas fails on occasion, with some undoubtedly worthy and interesting items sometimes struggling to sit comfortably within these themes.

That shouldn't detract too much from the intriguing nature of many of the objects on display here, and being encouraged to re-examine our attitudes to death seems particularly appropriate at a time when our ageing population means that mortality is a consideration for an increasing number of people.


Death: A Self-Portrait by Richard Harris runs until 24 February at the Wellcome Collection, 183 Euston Road, London NW1 2BE. Admission is free

Move from Reserving/Capital to Lloyd's Pricing? Get in touch...