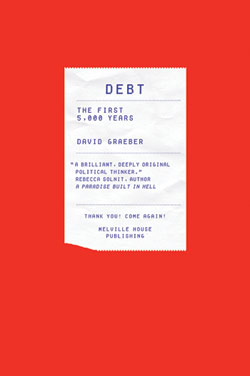 David Graeber is a driving force behind the Occupy Wall Street (OWS) protest movement and is credited with coining the OWS slogan: 'We are the 99 per cent'. Anyone who doubts OWS's intellectual substance should attempt to read this book.

I say 'attempt' because it is hard going - I started it in August and finished in November. And yet it shouldn't have been- it is on my favourite subjects, brilliantly written, erudite and full of fascinating detail. However, it is infuriatingly discursive, which causes its key points to get lost.

It is three books rolled into one - a treatise on the morality of debt, an anthropological study in the use of credit and money, and a long-history of debt and money - and may well have worked better as three books. Graeber is always insightful, but suffers for inserting his own views into what is otherwise analysis. This undermines the reader's faith with the suspicion that he is looking at history through the prism of his world view.

For example, he undermines the text-book economics assertion that 'primitive' societies start off with barter economies and then develop money. These societies actually work through a sense of mutual obligation amongst equals. This is important because it totally changes the idea of what money is and where it comes from. So, my neighbour says to me "I like those shoes" and I am obliged to give them to her. At some later date, I see her and say "I fancy an apple" and she is obliged to give me an apple. This is illustrated with the example of the Tiv people in Nigeria, but it begs the question of whether they are a special case or a general rule. And although the Tiv are fascinating in themselves, Graeber stays with them far too long.

Money was invented, by bureaucrats in Mesopotamia, to account for these obligations; turning them into formal debts. In doing so, the social links are broken - the debt relationship being hierarchical and often ending in slavery. This was always associated with actual or threatened violence. Graeber then proceeds with his personal view of human history, split into periods depending on whether species or virtual money are dominant. Coins were invented later to pay mercenary armies - being among foreigners, they cannot rely on credit.

And Graeber's answer to today's problems? A biblical-style debt jubilee. I think it is just about worth while battling through the book to discover why.

Nick Silver is a director of Callund Consulting, a consultancy specialising in development and pensions