Natalie Li reflects on the awe-inspiring power of nature  and technology. A review of Rain Room by rAndom International at The Curve, Barbican 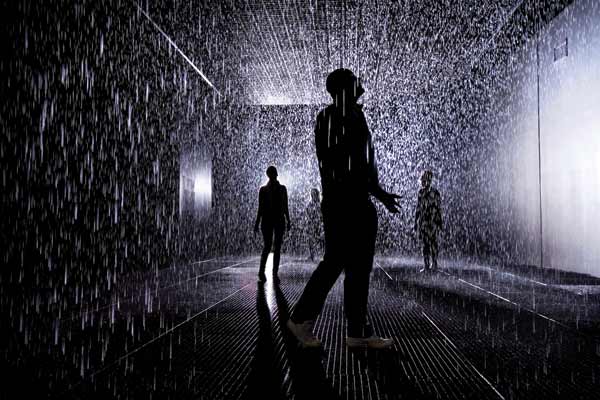 Weather-hardy Brits are no strangers to unpredictable downpours of torrential rain upon our fair shores. So the appeal of being able to control rain and avoid being drenched has formed the centre piece of an ambitious exhibition in The Curve at London's Barbican.

It's no force of nature but in fact the work of rAndom International, an experimental company that has used digital technology, involving motion-sensor cameras, to recreate the elements.

Floods of people - excuse the pun - have attended since the exhibition opened in October, so expect long queues and a lengthy wait. But what makes the mundane, everyday act of standing in the rain so appealing?

As I enter, the mesmerising sound and sight of rain fills the room and anticipation grows as visitors prepare to face the deluge. The installation tracks your movements as you walk through the rain, allowing you to dodge downpours. A bright light at the end of the gallery exposes visitors and creates an ethereal glow. The water drips through a grid in the floor, where it is treated, before being sent back up to the ceiling to fall again. This sensory experience is, according to rAndom International, a chance to invite the public to explore what role science, technology and human ingenuity might play in stabilising our environment.

"The exposure has been pretty overwhelming. We never could have anticipated just how much attention the project would get," says Hannes Koch, one of the founders of rAndom International.

Koch formed rAndom International in 2005 with Florian Ortkrass and Stuart Wood after they met at the Royal College of Art in London. Rain Room is their largest project to date and was born after a brief brainstorm three years ago.

The installation uses 2,500 litres of water, falling at 1,000 litres per minute in the gallery space at the Barbican, which also houses a theatre and a concert hall. It took more than nine months to make and three weeks to install. Rather than faze the artists, the logistics of developing such a project seems to have driven the arts collective.

"The logistical effort involved was phenomenal. We had to spend hours investigating what rain is and how to emulate it on a technical level, so we developed a number of prototypes," Koch adds.

The whole project was a massive challenge and the installation is prone to the odd glitch. Rapid movement under the sensors can prompt downpours on unsuspecting participants.

Koch admits that fine-tuning and adjustments are typical because of the nature of the exhibition, but ever-eager technical staff and special software all help to monitor the installation and resolve any issues.

The determined Koch and his co-founders never fail to push boundaries and in 2008 joined forces with the dance world in their installation Audience - in which mirrors reacted to human movement. The collective worked with choreographer Wayne McGregor, artistic director of Sadler's Wells' Random Dance company. They have since worked with McGregor to design the sets for his dance piece FAR in 2010 and they will collaborate once again on Rain Room.

On 20 January and 24 February, dancers from Random Dance will perform a new short piece in collaboration with rAndom International in response to the installation, with a score by British composer Max Richter.

Interaction is at the heart and soul of this project, and it appears that rAndom International has hit the spot. During my time waiting (only seven people are allowed in at one time), I watched as children gleefully skipped and danced under the rain, parents gaping onwards in awe. There is no denying the technical ingenuity of this arts collective and even if the wait is a tad tiresome, it's well worth it.