Andrew Tjaardstra reviews Michael Lewis' analysis of the financial meltdown, but fears that the story is not complete 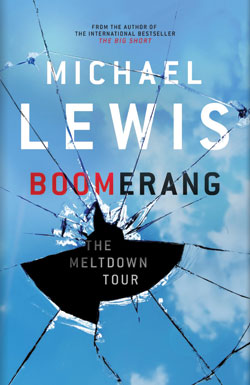 Not satisfied with uncovering deep flaws in the financial system in his notorious exposé of the subprime crisis, The Big Short, this time Lewis is after not just big- time banks but also governments and whole nations alike. He examines, often humorously (although sometimes you don't know whether to laugh or cry), how major financial busts can be linked to national psyches and traditions, meeting politicians, bankers and even monks along the way.

First stop is Iceland. Lewis explains how a small country of 300,000 people, strange politics, and seemingly famous only for fishing and Bjork, fell into effective bankruptcy just days after the collapse of Lehman Brothers on 15 September 2008.
One reason is that the free-marketeer and poet prime minister of Iceland became governor of the Central Bank, despite zero experience of banking.

Another is that many of the Icelandic bankers (almost exclusively male) were routinely paying over-the-top prices for businesses that weren't exactly stellar; most seriously, bank money was lent to a select group to buy shares in the very same, soon-to-fail bank, something that also happened in Ireland. As ever, investors from 'sophisticated' countries simply couldn't resist the story of high returns, pouring billions of dollars into the country's banks.

One banker from Dankse Bank in Denmark, describes Iceland as "the most extreme of everything". It is a spectacular rise and fall, and Lewis hints that banking may have unleashed a hidden megalomania in the male Icelander.

Lewis also describes the folly of a German bank ending up on the wrong side of huge subprime bets, which he suggests might be attributed to certain perceived national characteristics. Triple-A rated bonds actually consisted of extremely poor-quality mortgages.

In California, he explains how the relationship between politicians, unions and the people has made many towns' fiscal messes unworkable, paving the way to seemingly inevitable bankruptcy.

Perhaps, the most intriguing story is the Greek monks at the stunning Vatopaidi monastery in Mount Athos, who managed to forge a property empire with official assistance, ultimately bringing down the government and exposing the charade of Greek financial statements to the eurozone. The monks are under investigation for tax fraud, but the monastery, cut off from the mainland, appears to enjoy tax-free status (tax evasion comes across as extremely popular in Greece).

Ireland is summed up as a mess from start to finish. One businessman is given finance to build a luxury five-star hotel in a completely unsuitable location; his bankruptcy means personal devastation, and he takes an unusual form of revenge against the bankers and politicians. Meanwhile, the banks are bailed out. Lewis appears most surprised that the citizens aren't more angry about this.

The shame about this book, at only 212 pages of double-spaced lines in hardback, is that it isn't long enough and perhaps not terrific value for money. But you can be assured Lewis had great fun researching it. Unfortunately, it is easy to see where the sequel will come from - next stops Italy, Portugal and Spain? Let's hope a trip to China will not be necessary.

Andrew Tjaardstra is editor of Custody Risk
Filed in
Arts