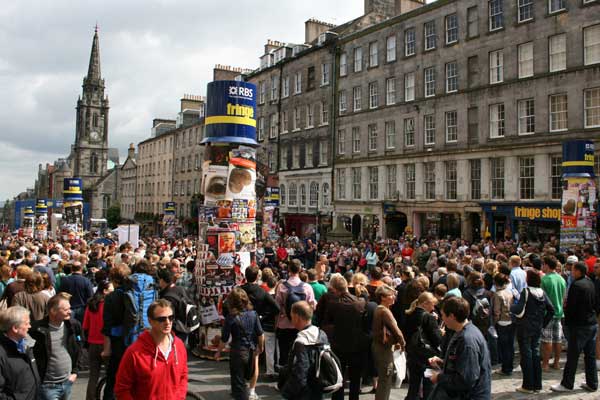 When I first moved to Edinburgh in 2004, the Fringe Festival pretty much meant just one thing to me: comedy. This year, however, upon picking up the programme, I skipped past the comedy pages and went straight to the theatre section. Why was this? Was it because I recently turned 30 and subsequently lost my sense of humour? No, of course not.

It was simply down to the fact that, the week before the programme came out, a multitude of otherwise sane people had looked me in the eye, and in all seriousness told me that the 'greatest film ever made' was not The Godfather, Casablanca or Psycho, not Chinatown, It's a Wonderful Life or even Annie Hall, but, wait for it, Anchorman. (If you
are nodding your head, please move to the next section of this magazine; I have nothing to say to you.)

It was this milestone that forced me to properly reflect on the havoc that the comedy genre has wreaked on humankind over the past eight years. Clearly, for many people, the seemingly harmless act of watching an intermittently amusing comedy completely capsizes their powers of reason. I cannot, in good conscience, continue to support a genre that represents a direct threat to Western civilisation and neither, I suggest, should you. Instead, here are some alternatives.

The Letter of Last Resort/Good With People, Traverse Theatre, 4-26 August
This double bill is not to be missed. David Greig's The Letter of Last Resort starring Belinda Lang (pictured) tackles nuclear defence and won acclaim when it premiered at London's Tricycle Theatre. Meanwhile, David Harrower (Blackbird, A Slow Air) looks at Scottish small-town society in Good with People, first seen at Glasgow's Òran Mór in 2010.

After the Rainfall, Pleasance Dome, 1-27 August
Curious Directive returns to Edinburgh after its success with last year's impressive Your Last Breath. That play saw the company conjure up a snowy Norwegian landscape; this year's effort finds it in the Egyptian desert as it looks at the aftermath of Empire.

This Show Has No Title, Traverse Theatre, 7-26 August
Daniel Kitson makes a welcome return after taking a break from last year's Fringe. (Incidentally, if you must insist on seeing a comedian, Kitson is also at The Stand comedy club from 5 to 26 August.)

The Agony and Ecstasy of Steve Jobs, Gilded Balloon Teviot, 1-27 August
This play arrives dogged by controversy over the factual basis of the story Mike Daisey tells about conditions in Apple's Chinese factories. Expect drollery about turning off your iPhone, and to feel a modicum of guilt.

The Price of Everything, Northern Stage at St Stephen's, 3-25 August
Daniel Bye promises to educate and entertain in roughly equal measure as he contemplates questions of value.

And No More Shall We Part, Traverse Theatre, 30 July-26 August
Tom Holloway's play examines the pressures that illness and ageing exert on a relationship. Bill Patterson and Dearbhla Molloy take the lead roles.

Oh, the Humanity and Other Good Intentions, Northern Stage at St Stephen's, 9-25 August
A good choice for anyone with a short attention span, these five New York plays by Will Eno are each just over 10 minutes long.

Six and a Tanner, The Assembly Rooms, 2-26 August
This one-man play by Rony Bridges stars Glaswegian actor David Hayman, fresh from his turn as King Lear at the Citizens Theatre.

Lastly, as part of the International Festival, TEAM's Primer for a Failed Superpower at The Hub should be well worth seeing if the company's sublime Mission Drift show from last year is anything to go by. For further information on events, see www.edfringe.com
Filed in
Arts