Arts: Gatz gets them going

Richard Elliott looks forward to a long day at the office as F. Scott Fitzgeralds masterpiece transfers to the stage 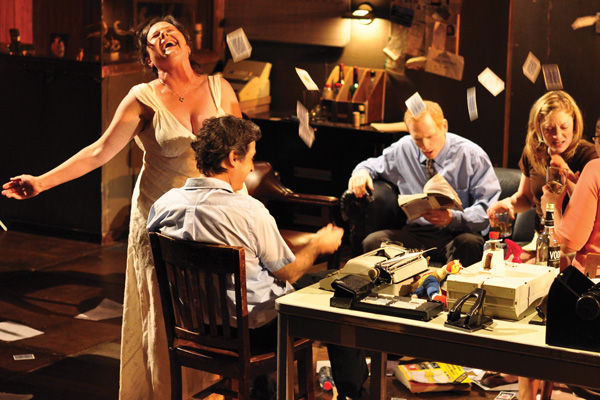 Thirty years ago, the brilliant Andy Kaufman used to empty theatres with a stunt outrageous in its simplicity. In response to hecklers who demanded he perform as Latka, his character from hit US sitcom Taxi, Kaufman would announce that, as a special treat, he was going to read for the audience a celebrated work of American literature.

He would then proceed to read F. Scott Fitzgerald's The Great Gatsby, page by page. When he tried this stunt on Saturday Night Live (the footage is on YouTube), the crowd grew increasingly irate, and so Kaufman offered an alternative: he would play them a record. The record, of course, merely picked up where he had left off: "Only Gatsby, the man who gives his name to this book"

Now, rather than emptying theatres, the spoken text of The Great Gatsby is filling them. Gatz, pictured above, arrives at the Noël Coward Theatre in London in June and features every word of Fitzgerald's masterpiece. The show, from the New York theatre group Elevator Repair Service, begins with an office employee, played by Scott Shepherd, happening upon a copy of the novel, among the clutter on his desk.

He starts to read aloud from it. His colleagues hardly notice him at first, but slowly their actions and the story of the book merge.

Gatz has had a troubled history. It has toured America and Europe since 2006, but legal disputes with the Fitzgerald estate meant that it was barred from the stages of New York and London. When it finally made it to Broadway in 2010, it opened to critical acclaim, with the New York Times hailing it as: "The most remarkable achievement in theatre not only of this year but also of this decade."

Much has been made of the length of the show - spanning eight hours, the running time is six and a half with three intervals. If that hasn't put you off, it's not exactly cheap either. A decent seat will cost you £70-£80, expensive even by West End standards.

I missed the same company's production of Hemingway's The Sun Also Rises at the Edinburgh International Festival in 2010, so I've already obtained my ticket for Gatz.

If you are of the opinion that a novel is a novel and a play is a play, then perhaps you would prefer to see the Nica Burns-produced Long Day's Journey into Night, which is in the West End until August. The famous last line of The Great Gatsby reads "So we beat on, boats against the current, borne back ceaselessly into the past"; it's hard to think of a play more obsessed with the past and its repercussions than Eugene O'Neill's masterpiece. Indeed, at one point, one of the characters exclaims: "The past is the present, isn't it? It's the future too."

When O'Neill completed the play in 1942, he sealed it up and ordered that it not be published until 25 years after his death. Given the painfully unflattering portrait of a family closely resembling his own, it is little wonder the author sought to delay publication for a generation.
However, the play was published just three years later after his death in 1953. It was quickly acclaimed as his finest work and he was posthumously awarded the Pulitzer Prize in 1957.

I saw the play at the Theatre Royal in Glasgow earlier this year. As with so many modern productions, the set itself is a main attraction, a stunning recreation of the seaside home where the entire action of the piece occurs, its walls peppered with allusions - photos, framed newspaper cuttings, religious icons - to the past lives of its inhabitants.

The main draw for British audiences will be David Suchet, who gives an effortlessly commanding performance as the patriarch of the dysfunctional Tyrone family. But it is American actress Laurie Metcalf who steals the show playing the morphine-addicted mother, Mary. While all four main characters, James, Mary and their sons, Jamie and Edmund, ably played by Trevor White and Kyle Soller respectively, are on a downward trajectory, Mary's descent into darkness is most affecting.

One final word of advice to anyone seeking out either of these classics this summer: leave time for a drink afterwards - you're likely to need one.

Richard Elliott is stepping down as arts editor of The Actuary. If you are interested in applying for the role, email the editor, Deepak Jobanputra, at [email protected]