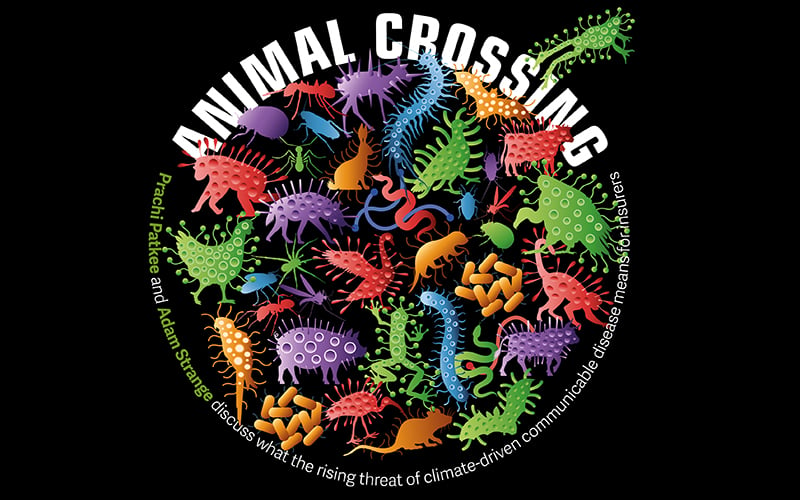 Since the outbreak of COVID-19, global interest in public health has seen increased societal vigilance and monitoring of emerging infectious diseases. As countries broke through their self-imposed protective COVID-19 bubbles, 2022 was marked by the outbreak of a familiar yet rare infection: monkeypox. Discovered in 1958 among monkey colonies in a Copenhagen animal research facility, the first human case was reported in 1970. As we write, the 2022 outbreak appears to be receding, with around 67,000 cases reported worldwide; this represents the first major spread of monkeypox outside of Central and East Africa.

While it is alarming to have to contend with yet another communicable disease, scientists were not completely taken aback by monkeypox’s re-emergence.

The role of habitat and climate change

Zoonotic diseases are born via cross-species transmission, with the pathogen derived from animal-to-human spillover from wildlife – a phenomenon thought to have been increasing in frequency during the past few decades. This could partly be a consequence of habitat change, including deforestation, climate change and encroachment of humans into previously isolated animal territories, bringing humans and domestic animals into closer proximity with wildlife.

The biology of certain species, particularly those with more resilient immune systems, means they can host zoonotic diseases without succumbing to the infection. Bats and rodents are often vectors that can play the intermediary in disease transmission, and are thus considered high-risk reservoirs. Spillovers from these isolated reservoirs have seen increases in animal-to-animal and animal-to-human disease transmission, leading to epidemics and endemic diseases such as Ebola and Zika.

Humans also continue to be affected by conditions such as malaria and yellow fever (transmitted by mosquitoes), Lyme disease (transmitted by ticks) and bubonic plague (transmitted by rodents and fleas).  Approximately 60%–75% of human infectious diseases are a consequence of pathogens originating from other species. Influenza, for example, is a remnant of this process: a family of viruses that spread from animals but is now a leading cause of worldwide mortality.

The SARS-CoV-2 virus responsible for COVID-19 likely followed the same pattern of entering the animal reservoir and then crossing over into humans. As it spread rapidly through the human population, numerous global reports emerged of animals developing infections following contact with people, including domestic pets, farm animals, wildlife such as deer, and animals in zoos and sanctuaries.

It is predicted that climate change will drive 3,870 species of wild mammals into new areas by 2070, altering their geographical ranges and habitats. This is forecasted to lead to more than 300,000 new cross-species encounters across the globe, particularly in tropical Africa and southeast Asia. According to Carlson et al.’s 2022 Nature article ‘Climate change increases cross-species viral transmission risk’, there is the potential for 15,000 virus-sharing events to take place between 2011 and 2040.

COVID-19 is empirical evidence of the potential impact and disruption that a vector-borne illness can bring to healthcare systems. Systems that are less funded and have limited capacity to pivot and rapidly adapt to changing circumstances, in conjunction with a lack of awareness about the containment, treatment and prevention of such conditions, may find themselves in the eye of an acute storm in terms of future epidemics.

While there are mitigation measures in place for more familiar global infections such as malaria, medical knowledge may be lacking outside of regions where such diseases are currently endemic. Wetter and warmer winters across Europe and North America could see seasonal patterns of insect activity develop into year-long cycles, with fewer colder months and therefore less opportunities to reduce the thriving capabilities of certain infectious species. Swathes of populous and urban European and North American populations may be at risk of exposure to new vector-borne diseases that were previously unfamiliar to their inhabitants.

Not every disease of this type is likely to cause substantial threat to life, and there are many potential infections that will pass relatively silently – but there is always an inherent risk that a new, serious infection could cross over and pose serious health concerns. Such outbreaks have the potential to overwhelm global healthcare systems, widening the health inequity gap. This will likely be most prominent in developing countries and among lower socio-economic groups. COVID-19 brought to the fore societal disparities in healthcare access, which determine resilience and recovery outcomes.

COVID-19 has taught us that no segment of society is immune to pandemics and communicable diseases. While impacts may be less severe for those who have better access to preventive measures, there remains the potential for substantial transmission through ongoing waves of an acute outbreak. Communicable diseases are complicated, and fighting them will need co-ordination beyond healthcare systems: there are roles to play for urban planners, environmental scientists, civil engineers and policymakers, too.

The core concern will always be medical. Given the wide-ranging spectrum of transmission modes, diseases will need to be evaluated on an individual basis to assess their risk, considering the region of spread, existing treatments and control measures. As a global industry, insurers will need to remain on guard and keep up with reports from global health monitoring agencies as this landscape evolves; long-term forecasting remains speculative as new threats emerge. To increase coverage among the currently uninsured population, insurers may choose to develop novel products and solutions for regions that are subject to a particular endemic disease.

Efforts to reinforce and build resilient health systems, alongside strategic deployment of preventive interventions such as vaccination programmes, will serve communities well. Ultimately, long-term urban planning, environmental regulations and climate-forward policies will aid in the minimisation of this looming threat.