The unfolding of time 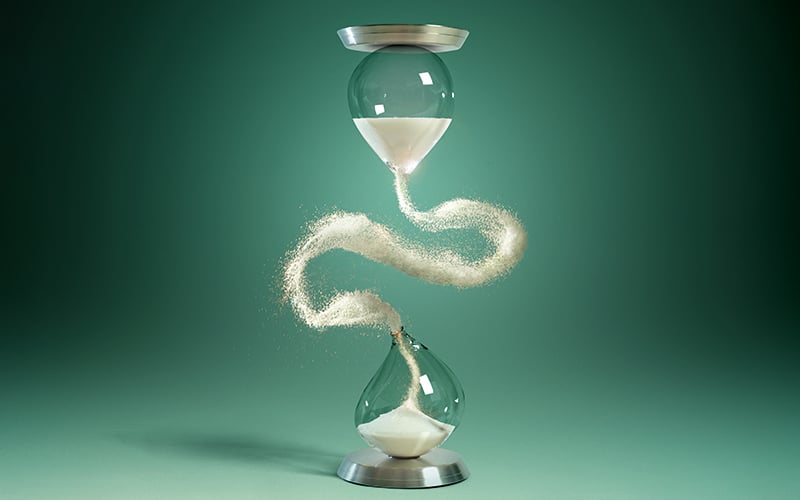 Should investors be taking a more dynamic view of time? Jon Exley shares his thoughts

The unfolding of time has been well understood in physics for many years, but causes widespread confusion in the investment world. A static view of time, and the measurement of investment risk in static time, can lead investors to the wrong conclusions.

The ‘time in the market’ fallacy

A popular phrase among investment advisers is: “It’s not about timing the market, it’s about time in the market”. The suggestion is that equities are risky over, say, five years, but not over 10 years. Let’s analyse this further by looking at the ‘split period paradox’.

Let’s suppose that we hold equities for five years and lose a lot of money because they are risky. We now have five years left of our original 10-year horizon. However, we know equities are risky over five years, so what do we do now?

We should recognise the simple mistake of looking at annualised returns, as in Figure 1, and believing that the convergence of this annualised rate of return over long periods proves the power of ‘time in the market’. 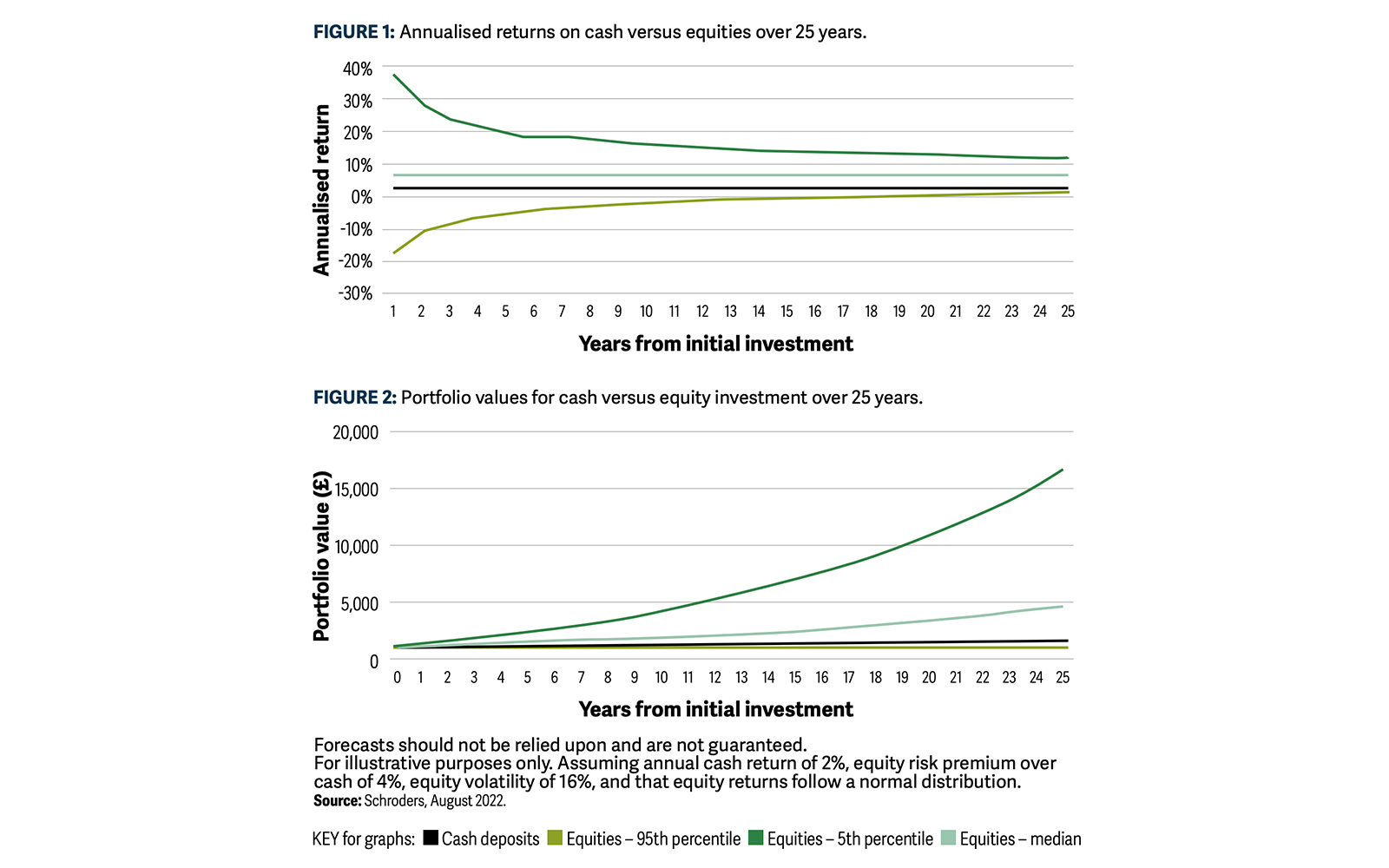 However, it’s the portfolio value that interests the investor, not the annualised return. If you remove the annualisation, as in Figure 2, the converging ‘funnel’ of returns becomes a diverging ‘trumpet’ of portfolio values. In one sense it is indeed proof of the ‘power’ of time – but only the 1/nth power.

Quantities such as value at risk do appear to show that portfolio risk – as measured by low-probability downside outcomes – falls for equity investors over long time horizons. Even for complex models, most of this effect simply relies on the fact that, starting from today, expected return grows with time in a linear way, while volatility grows with the square root of time, which is a feature of combining independent variables and not just normal distributions.

Despite appearances, this phenomenon doesn’t prove anything about the benefits of time in the market – it is just a more sophisticated version of the ‘split period paradox’. The apparent reduction in risk relies on the fact that if we combine independent returns over independent time periods, we get a natural diversification between, say, returns in year two and returns in year 10. What is overlooked is that once the return in year two has happened, as we travel forwards through time, risk in year two is no longer available to offset risk in year 10. The investor cannot actually experience this reduction in risk, unless they can repeat the first two years multiple times!

This means that a statement about the probability of long-term loss is true only at the time of calculation and has no relevance even one time-step later, when the next period outcome has been realised. While it is presented as a long-term statement, it is only mathematically perfectly true for a vanishingly short period, so lacks practical relevance. In practical terms, the passage of time just means that the whole ‘trumpet of doubt’, including the end points, moves up or down with the daily movement in the starting point.

Travelling on a scenario path

To an observer at time zero, the downside risk of asset value projections over long horizons appears to be bounded or attenuated, but to an investor who is travelling along an experienced scenario path, asset class risk will appear to be much the same at all future points in time. The attenuation of risk seen by the observer at time zero is due to the offsetting of independent future realisations, and this effect disappears for the observer if they move through time.

We need to think in more relative terms when we design investment strategies, especially for individual investors – although there are also important implications for institutions. In other words, just as physicists think about sitting on a light beam, we need to think in terms of an individual investor sitting on a projected scenario path. In this framework, what is behind the investor has happened and simply determines the portfolio value at any instant in time.

Furthermore, whatever portfolio value the investor has accumulated at a future time will probably feel the same as the portfolio accumulated today, and the investor will probably feel much the same way about increasing or losing it. In particular, the investor is unlikely to have a memory anchored on what the portfolio value is today, because there is nothing special about today – tomorrow will keep becoming today. This is the essence of dynamic time, as opposed to static time.

This view of risk also links with the concept of constant relative risk aversion – the idea that however much portfolio value you have at any point in time as you travel along the actual realised scenario path, you tend to feel the same way about incremental proportionate gains or losses (gains or losses expressed as a proportion of your existing wealth at any time not anchored to a historic date). This isn’t a perfect model, but it’s a great first approximation that fits well with a dynamic view of time.

Implications for goal-based strategies for individuals

One implication of a more time-consistent way of thinking about risk is that it doesn’t support a ‘goal-based’ approach to personal investment strategy, where the investor’s asset allocation and thus their implied risk aversion is adjusted to meet their goals with the highest probability. The objective of maximising the probability of outcome is questionable in itself, but it also leads to the time passage problems that we have already discussed.

Under a constant relative risk aversion framework, an investor’s attitude to risk is assumed to be an intrinsic human characteristic like height, rather than something that can be manipulated in order to meet a goal. If investors are risk averse in this framework, they don’t want to see the wealth that they have accumulated at any time collapse by large amounts.

We thus apply their attitude to risk continuously through time, rather than setting a strategy based on a probability of outcome calculated today, with all the inevitable contradictions tomorrow.

Most institutional investors wouldn’t fall for the mean reversion folklore or the annualised returns fallacy, and the relevance of constant relative risk aversion to an institution can perhaps also be debated. However, the concept that investors will probably feel the same anchoring to tomorrow’s position as they feel towards today’s position does have some resonance.

Furthermore, the more subtle implications of the long-term risk fallacy are pervasive, even for institutional investors. This is because the mathematical result that expected returns increase in time in a linear fashion, while risk calculated today increases with the square root of time, is at the heart of a widespread belief that, by taking more risk, an institution can have more certainty of achieving a target funding or solvency level over a long horizon. This is an obvious fallacy for the same reasons as it is for individual investors – it relies on the offsetting of independent risks in independent future periods. The offset falls away as we travel through time and outcomes are realised.

Many traditional investment ideas fail when we analyse them in the context of the unfolding of time, and many treasured theories about how risk varies with time are shown to be contradictory.

A more coherent framework comes from assuming that investors always have constant relative risk aversion in relation to their total wealth at any time – but under this framework, their risk aversion is not a parameter that can be adjusted to meet a goal. It can, however, provide an alternative and more coherent explanation for investor behaviours.

This article appeared in our November 2022 issue of The Actuary.
Click here to view this issue
Also filed in
General Features
Topics
Investment
Risk & ERM