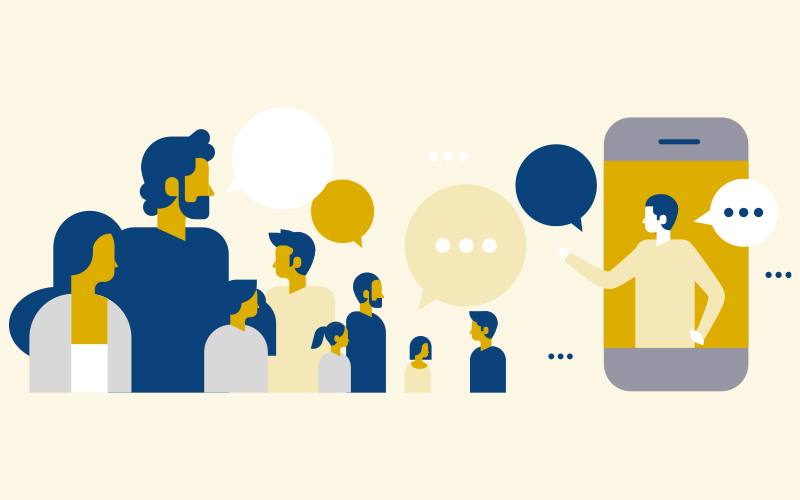 Get involved with the IFoA Buddy Scheme

If ever you find yourself in an interview room with me, you are likely to be asked: “Career-wise, where do you see yourself in five or 10 years’ time?” Over the years I have heard a variety of different answers, from ‘on a beach’ to ‘CEO’ to ‘in your job’! In truth, it’s probably an unfair question, because it’s very difficult to look that far ahead and anticipate the different twists your career may have taken by that time.

Throughout my own career there have been several turning points at which a key decision has had to be made, or an unexpected opportunity has arisen. At these moments, I have found it beneficial to be able to talk it through with somebody – whether that’s a colleague, peer, friend or mentor. That’s why I was keen to get involved with the IFoA Buddy Scheme when it was launched a few years ago.

Since getting involved, I have been a buddy to a few people, including recently to an early-career actuary who was contemplating a move from pensions to general insurance (a move I made myself 16 years ago). I have also talked to a couple of international actuaries who were looking to move to the UK – a huge decision that impacts both your personal and professional life. I feel these conversations work best if you act as a sounding board, because most of the time, deep down, people know what they want and are looking for reassurance, a different perspective or advice on the best approach.

It has been a pleasure to meet actuaries who are working in other fields and geographies and are at various points in their career, and it has certainly helped to give me a wider perspective.

I understand from my recent reflective practice discussion that, in the coming months, more emphasis will be placed on the fact that the buddy system can be used for peer-to-peer work-related topics such as emerging issues and actuarial methodologies. I think this is a great expansion and would encourage others to sign up and use it (mainly so I have someone to talk to!). 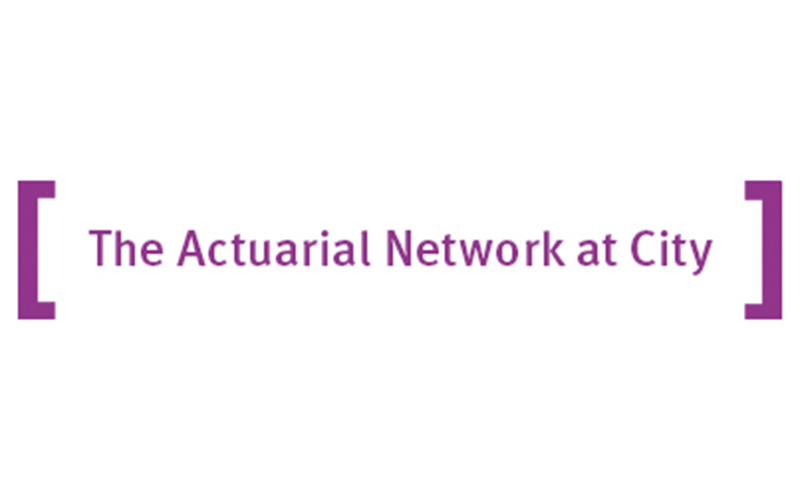 Terrorism in an Actuary’s World

During the past year, TANC has undergone a rebranding and is now The Actuarial Network at City. It retains a strong link between Bayes Business School (formerly Cass) and its actuarial alumni and their IFoA friends.

On 16 June, TANC hosted its first event since the emergence of the COVID-19 pandemic. The topic was Terrorism in an Actuary’s World, and Pool Re CUO Steve Coates was the speaker. Pool Re is the UK’s government-backed terrorism reinsurance mutual and Steve is responsible for all aspects of underwriting, claims, actuarial and exposure management, and modelling.

After the market failure in 1993, Pool Re ensured that property and terrorism covers could be made available as standalone products through a loan agreement with the UK government, under which Pool Re would pay annual dividends. Since the 2001 attacks on the World Trade Center in New York, similar schemes have been set up in 20 countries.

Pool Re has insured liabilities of £2.2trn and funds of £6.8bn, and is estimated to reinsure 90% of the terrorism market. Steve talked about the development of the pricing techniques used since 1993, including: academic collaborations; conventional blast; chemical, biological, radiological and nuclear; and nuclear modelling.

Steve also discussed the need to understand the impact of such events and any secondary perils to the distribution tails, along with the correlation of events across the world. With emerging risks and the constantly changing nature of terrorist attacks, the market must adapt quickly. For example, Pool Re covers any property damaged caused by cyber-attacks. Business interruption was previously dependent on property damage, but as of 2018, the cover can be bought without requiring trigger of property damage.

The event concluded with a lively Q&A session, followed by networking over drinks and nibbles.

For details about TANC’s next event, please visit tanc-bayes.co.uk 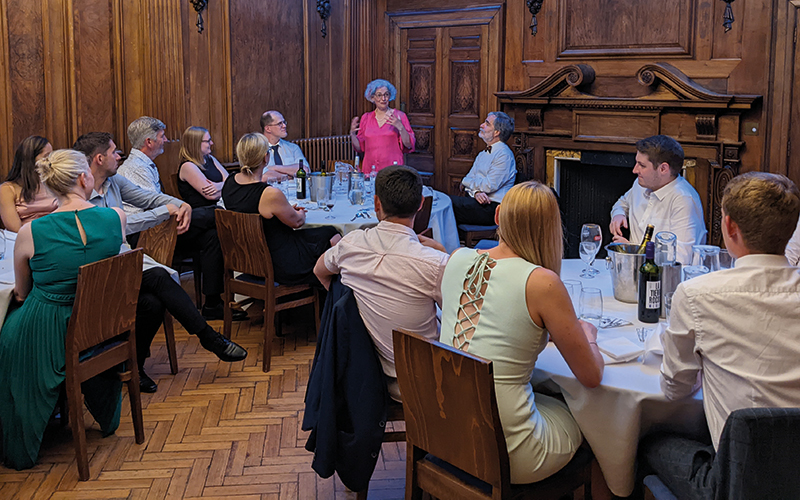 Louise Pryor, immediate past president of the IFoA, attended the Norwich Actuarial Society Summer Ball in June 2022, along with her husband Trevor. The event was hosted at the St Giles House Hotel in Norwich, where members and guests enjoyed a three-course meal, followed by casino games and music. The event was originally booked in 2020 but had to be postponed due to the COVID-19 pandemic. The weather was on our side for the evening, with temperatures exceeding 30°C (although this was not ideal for a black-tie dress code!).

Following dinner, the chair of the Norwich Actuarial Society, Richard Brown, kicked off the speeches by highlighting that the society had been in existence since 1987 and that Norwich was the location of the first GIRO conference back in 1974. The building in which the event was hosted was originally the headquarters for the London and Norwich Fire Insurance Company – which was ironically destroyed by a fire in 1901.

Louise gave members an inspiring speech in which she talked about her expansive career and time as IFoA president. She spoke about how she hadn’t always taken the traditional route with her actuarial roles, and how fulfilling it had been for her to keep changing positions for new challenges and following what she was passionate about. It was fantastic to have her at the event, where she mingled with attendees, and the Norwich Actuarial Society wishes her all the best of luck in her future endeavours.

Huge thanks go to the Norwich Actuarial Society Committee for their continued hard work during the past couple of years, and to our members and guests (and honorary guests) for attending. 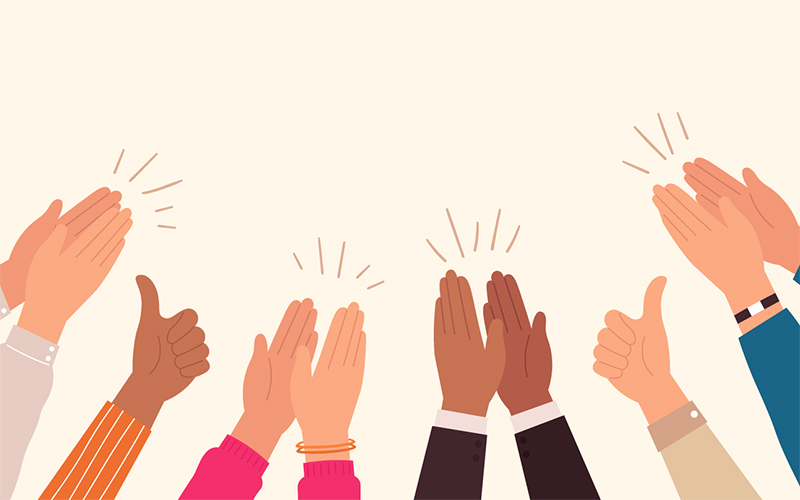 Fellow – will serve as president of the International Actuarial Association (IAA) in 2024, having taken on the role of president-elect in 2023.

“As the incoming IAA president, I am delighted to welcome Charles as the incoming president-elect,” stated Cowling’s predecessor, the IAA’s 2023 president Micheline Dionne.

“His wealth of knowledge on many actuarial topics and his already established leadership in IAA matters has shown how important he is to the international profession.”

Cowling, who is chief actuary at Mercer in the UK, said he was honoured to have been elected. “Actuaries have recently shown the important value they can bring in the areas of climate change and pandemics, and I hope to support the further growth and influence of the actuarial profession around the world.”

Meanwhile, the IFoA has expressed pride in the pensions actuary.  “We would like to congratulate Charles on this appointment and wish him every success as he prepares to take on the IAA presidency,” declared IFoA president Matt Saker.

Cowling has chaired the IFoA’s Pensions Board and International Board. He is the UK’s pension representative at both the Actuarial Association of Europe and the IAA.

We would be delighted to hear from you.

If you have any newsworthy items for these pages, please contact us at: [email protected]

This article appeared in our November 2022 issue of The Actuary.
Click here to view this issue
Also filed in
People & Social News