A matter of adjustment 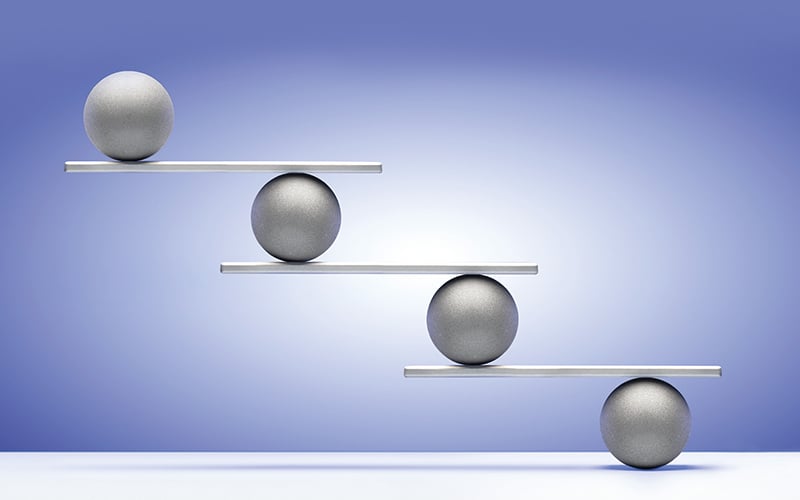 Private assets will continue to shine even under the Treasury’s proposed changes to the Solvency II matching adjustment, says Ziling Jiang

The FS calculation was originally defined by the European Insurance and Occupational Pensions Authority, and is currently [default cost + downgrade cost]. Broadly, it varies with rating, duration and bond category, but is agnostic to asset class. This means that some alternative asset classes that are favourably rated can exhibit a ‘too-good-to-be-true’ MA. In addition, the FS is currently floored by a long-term average spread that has been biting and stagnant, causing the

FS to be insensitive to market spread movements. This sometimes causes the MA to exhibit more volatility than desired.

Post-Brexit, the Treasury is reviewing the UK version of Solvency II, and has recently held a consultation. One proposed clause that drew much attention was the proposed new FS formula:

This new formula was designed to increase:

Any increase in FS magnitude and volatility will negatively impact the MA and possibly the annuity industry’s business capacity. This formula is widely believed to have such an effect. However, the Treasury argues that this will be more than offset by positive impacts of the other proposed measures: a 60%–70% reduction in the risk margin (RM) and more investment flexibility.

The IFoA welcomes the RM reduction proposal but is concerned about the potential balance sheet volatility and procyclicality introduced by the new FS formula. Instead, it proposes a ‘percentile’ method, based on the analysis of the MA Working Party. This involves adding an explicit margin for uncertainty to the FS’s ‘probability of default’ component, corresponding to the 85th percentile of the (default) loss distribution, calibrated using historical default data.

There are, however, two aspects of the analysis worth reconsidering: the working party modelled private debt as corporate bonds (Sterling iBoxx) + fixed spread, and did not consider the Z factor in its analysis. These will be our focus.

Private assets encompass a wide range of investment strategies, which can be very different from one another. Those with a significantly higher yield than the typical private placement/infrastructure debt (those that I believe implicitly underlie the MA Working Party’s analysis) will need a meaningful Z component to mitigate any ‘too-good-to-be-true’ MA issue and retain asset awareness. The Prudential Regulation Authority (PRA) suggested a 17.5% Z factor. Considering the vast range of private assets in existence, I believe the percentile method will be difficult to calibrate and justify.

Z components; should there be a spike in traded spread, X will stay relatively unchanged because of its historical averaging nature (assuming n ≥ 5), while Z shrinks. As a result, the total FS shrinks and the MA increases. In this way, while these private assets are not generating more yield, liabilities become more discounted, creating an artificial additional surplus at a time of public market crisis – an unintentional ‘counter-cyclical’ effect.

Will illiquid assets lose their edge in MA portfolios?

No. Due to the counter-cyclical effect, higher-yielding illiquid assets can still expect to deliver a higher and more stable MA than liquid assets.

Consider the following example under base and stressed (spread event) scenarios. An annuity writer with £22bn assets and £21.5bn best estimate liabilities-without-MA is choosing between three sets of assets, with varying levels of yield and credit quality, for its MA portfolio. Each of the sets of assets can be in the form of a liquid or illiquid asset, and their base and stressed characteristics can be seen in Table 1. 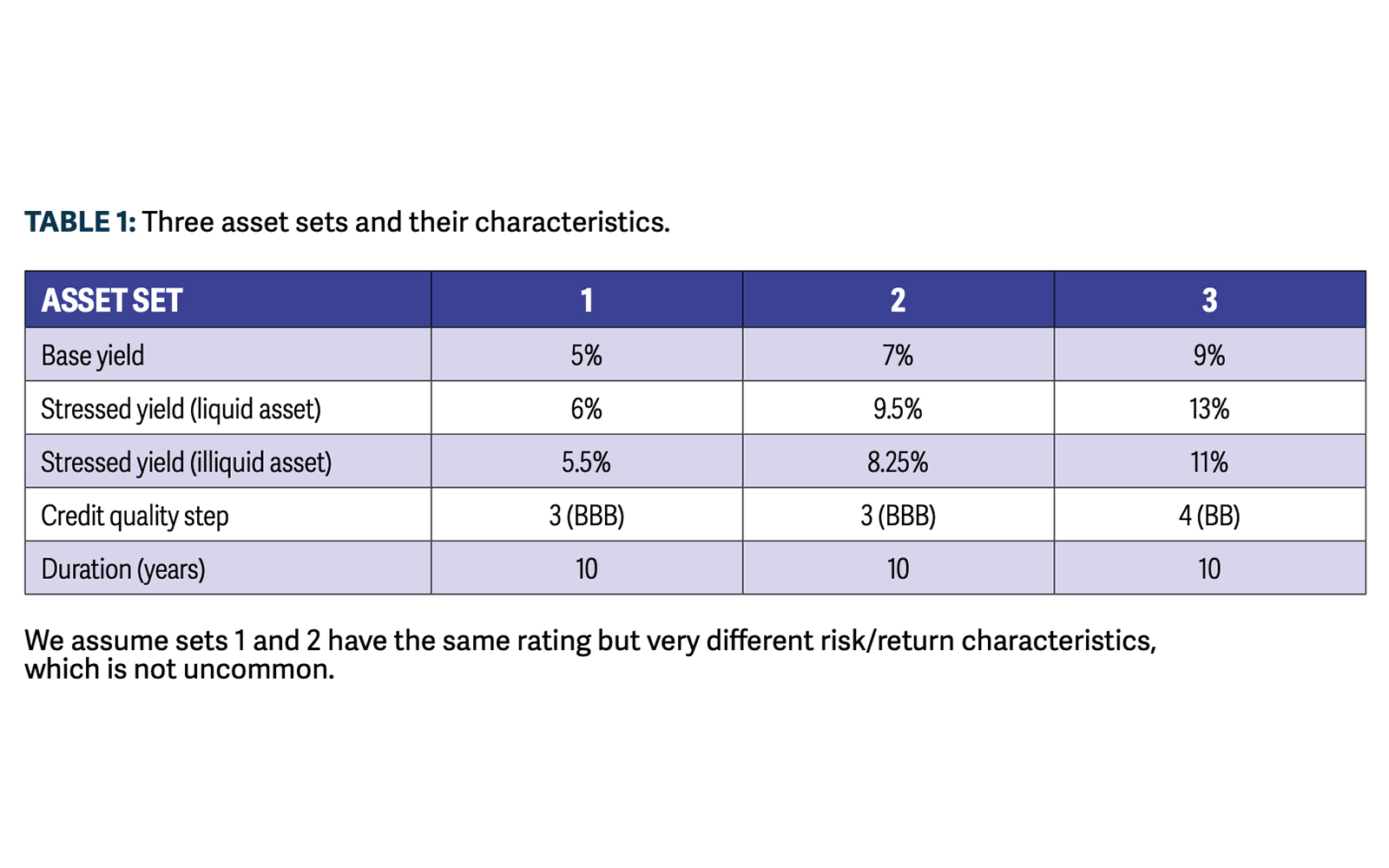 Note a key assumption that, under market stress, illiquid assets would experience less extreme spread widening than liquid assets – whether due to diversification, valuation lag or both. This is the most important basis in this article for deriving the different behaviours of FSs on these assets.

We also assume a 35% X factor and a 17.5% Z factor as per Treasury and PRA suggestions.

Our modelling indicates that for assets of the same yielding level, the net benefit to own fund is more robust for illiquid assets than for liquid assets (Table 2), although the MA can be nominally smaller. 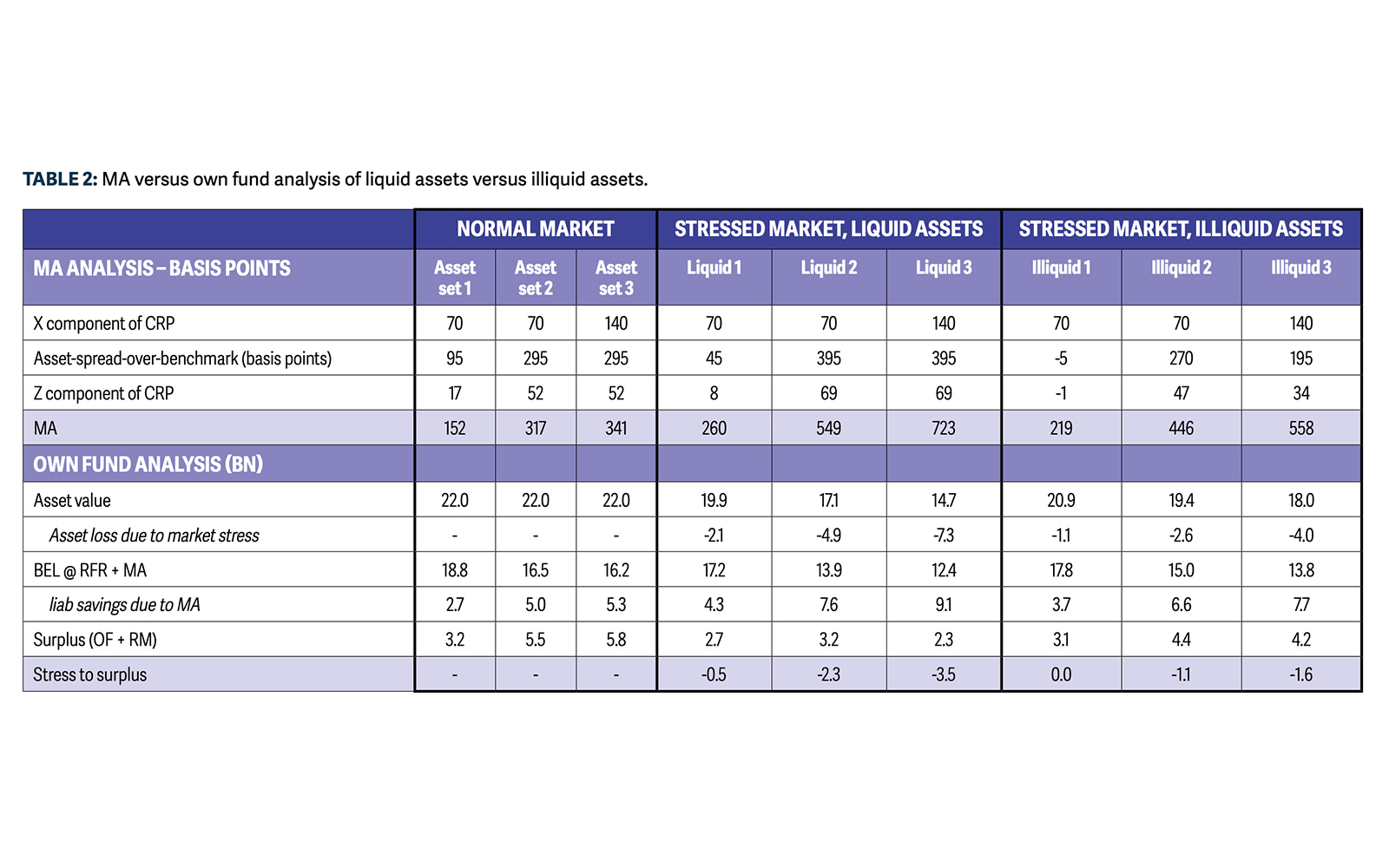 I believe the Treasury’s X + Z formula is a suitable improvement to current FS methodology, mainly because it adds risk awareness and asset awareness to the calibration, mitigating the ‘too-good-to-be-true’ MA issue in the current methodology. It also (unintentionally) introduces a counter-cyclical effect for illiquid assets, or any asset class with a low correlation to the reference index – something that the current methodology lacks. Again, the main thing carrying this conclusion in the modelling is that we assume illiquid asset spreads widen less than liquid asset spreads would. This is an intrinsic beneficial characteristic of these asset classes, which can’t be ‘overridden’ by regulatory changes. Allowing annuity writers to take advantage of these benefits can boost real economy-related investments.

“The Treasury is reviewing the UK version of Solvency II and recently held a consultation; one clause that drew much attention was the proposed new FS formula”

The current calibration of 35%–55% for the X factor and 17.5% for the Z factor is likely to create an uneven contribution between X and Z components. This is as intended because Z, driven by current spread, can otherwise add volatility to the FS. In my view, for illiquid assets, Z can be slightly increased to account for a lack of historical credit data – for example to 20%–25%.

If, rather than tuning X and Z, the formula were structurally amended, then a private benchmark should ideally be used as the reference index and the Z calculation should be amended to [asset spread – average private benchmark spread] rather than [asset spread – current benchmark spread]. This would remove the mismatch between X and Z components, as well as the unintentional counter-cyclical effects. However, there will be difficulty in finding suitable private market benchmarks, given the great variety of private assets. All in all, the value-add of structurally amending the current X + Z formula is unclear.

The percentile method, on the other hand, is likely to be difficult to apply for illiquid assets that are more niche than private placements and infrastructure debt – not only because there are too many varieties of those, but also because of the scarcity of associated benchmarks and data point infrequency in those benchmarks.