Boiling point: the effect of rising temperatures on future mortality 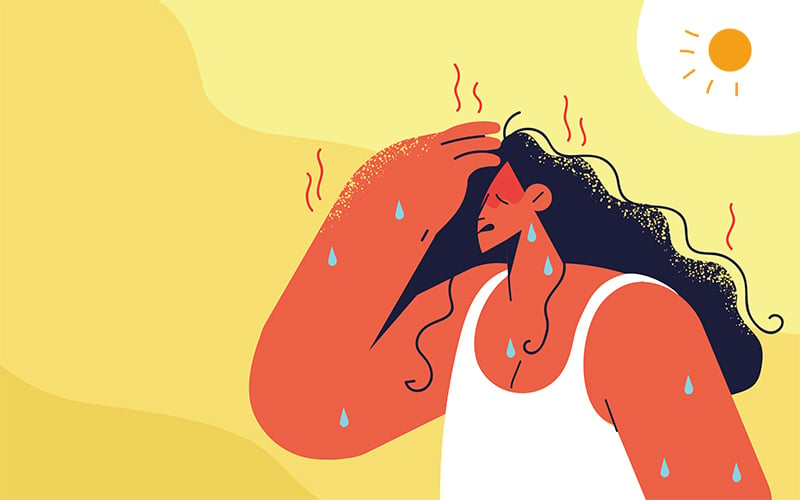 Insurers are spending an increased amount of time and effort on understanding how their financial position might be impacted as the consequences of climate change become more prevalent and severe. While the initial focus has been on assets, there is acknowledgement that a more holistic view is required that also considers liability exposure.

While the Bank of England’s 2021 Climate Biennial Exploratory Scenario overlooked liability risks, it did stress that mortality risk for life insurers could be material and should be seriously considered in the future. Former Bank of England governor Mark Carney has said that “the world is heading for mortality rates equivalent to the Covid crisis every year by mid-century unless action is taken”.

Life insurers’ liabilities could be impacted in several ways. Mortality assumptions alone are subject to primary effects such as temperature, air pollution and extreme weather, as well as secondary effects such as disease and food shortages. Since temperature and mortality data are publicly available and scientific research confirms a relationship between the two, we have explored the future impact of changing temperatures on mortality.

In the months since we started our analysis, the UK has experienced record-breaking temperatures, emphasising the importance of researching this topic. As part of our investigation, we modelled daily temperatures in a variety of climate change scenarios and quantified the consequential changes in future mortality rates.

Based on our findings, we believe that the frequency of extreme heat events in the UK will continue to rise, driving an increase in temperature-related deaths. 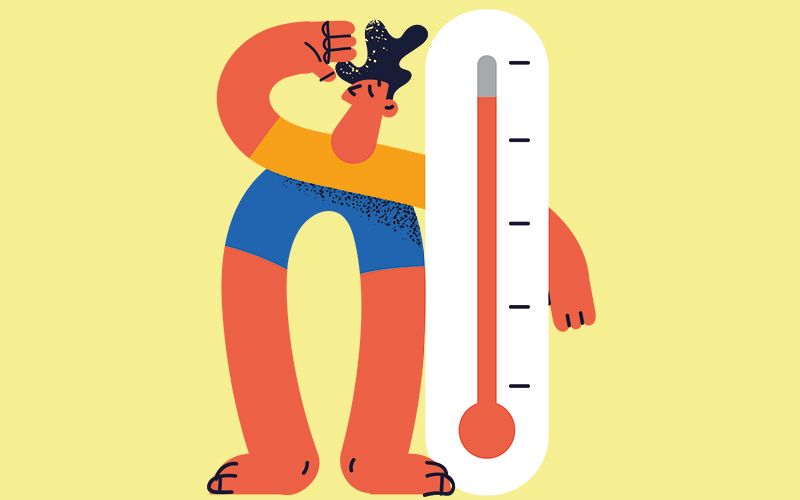 In July 2022, Coningsby, Lincolnshire recorded the UK’s highest-ever maximum daily temperature of 40.3°C. The Met Office red warning at the time stated that this heatwave would cause “population-wide adverse health effects, not limited to those most vulnerable to extreme heat, leading to serious illness or danger to life”.

Calibrating our model to a day where maximum temperatures reach 40°C, we would anticipate mortality rates for those aged 65 and over to rise by up to 10%. The July heatwave’s impact on UK mortality is unclear at the time of writing, but this is an area that needs to be closely monitored as the frequency and severity of heat events in the UK increases.

Our investigation takes a two-stage approach, the first being a temperature model to predict UK future daily temperatures, the second a mortality model that measures the temperature–mortality relationship.

The 4most temperature projection model is built as a stochastic simulator that randomly selects from a range of climate scenarios to forecast future temperature pathways. The model leverages data from the Met Office’s UKCP18 investigation, which provides probabilistic scenarios for average temperature change during the next seven decades. The UKCP18 forecasts are split by global emissions scenarios known as representative concentration pathways (RCPs), where the first challenge comes from identifying how a weighting can be applied to each pathway. RCP8.5 is the worst-case (no action) scenario, but this is unlikely to occur, given government mitigation actions. For our current model, these weightings are set using expert judgment.

After calibrating, the Monte-Carlo Python model is used to yield the projections seen in Figure 1. The distribution represents temperature increases that are likely to occur during the next 70 years, relative to 2020. They generally show an upward trajectory – although, in extremely optimistic scenarios, the effects of climate change on temperature could be reversed. The array of pathways reflects the uncertainty of climate change effects and the extent to which human action can reduce the impact. 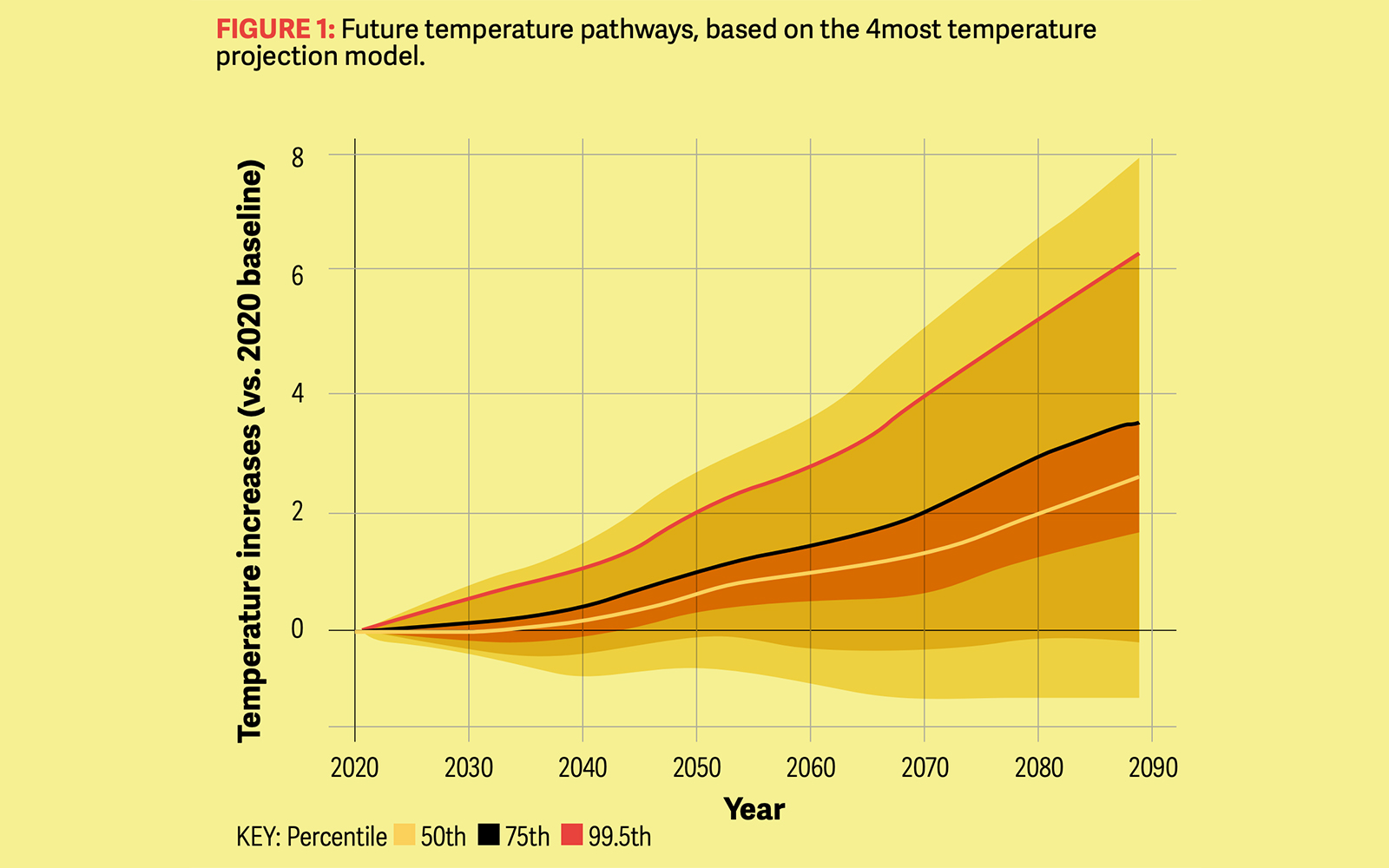 Converting these temperature increases from average to daily increases presents several challenges, including the question of whether daily temperature volatility would change over time. To model this, we must consider changes to extreme weather in the UK, as well as the climate. The expectation is that climate change will drive an increase in extreme weather, particularly through effects such as damage to the Gulf Stream weather system, but available research seems limited on this topic. This warrants further investigation to improve projections. 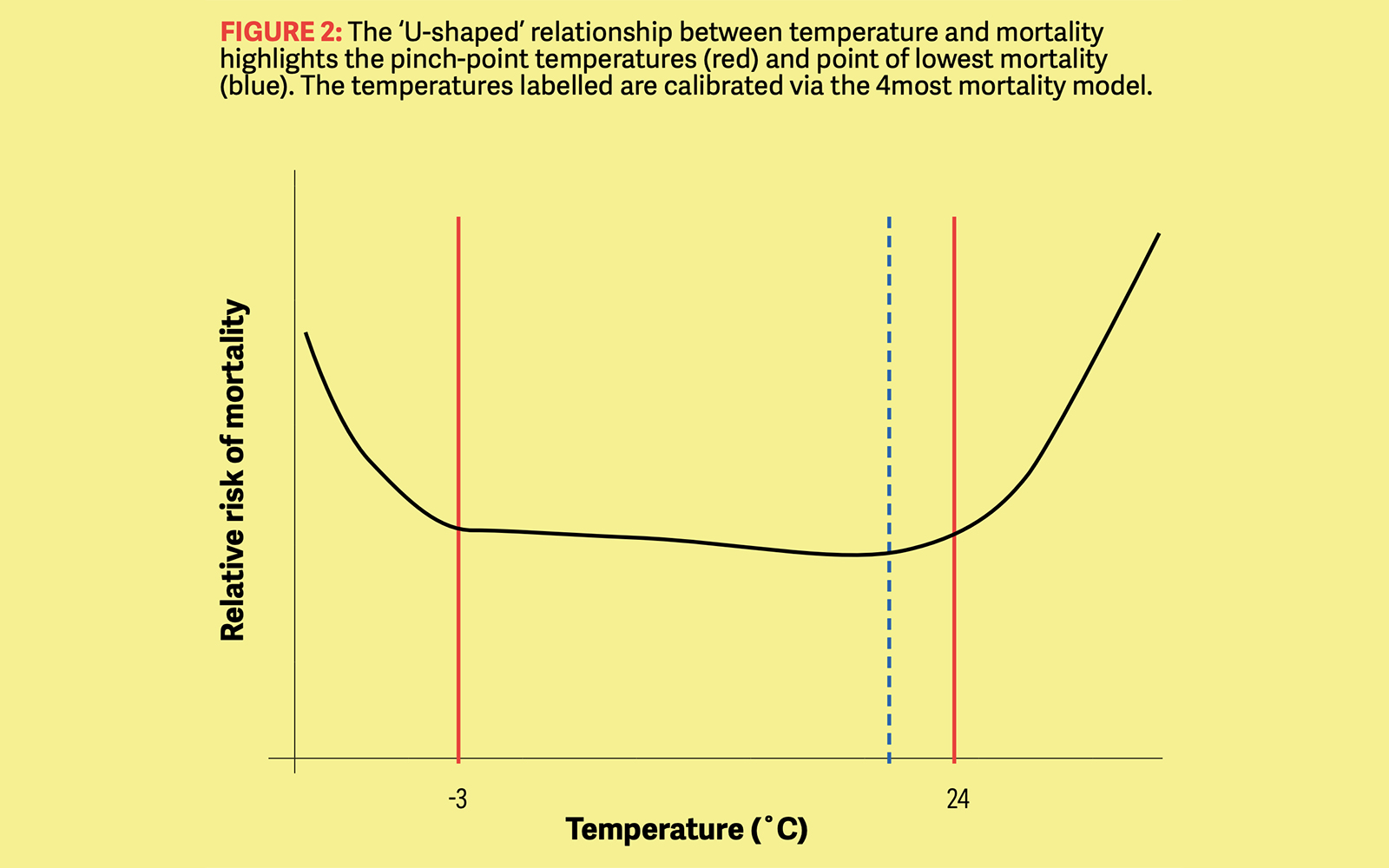 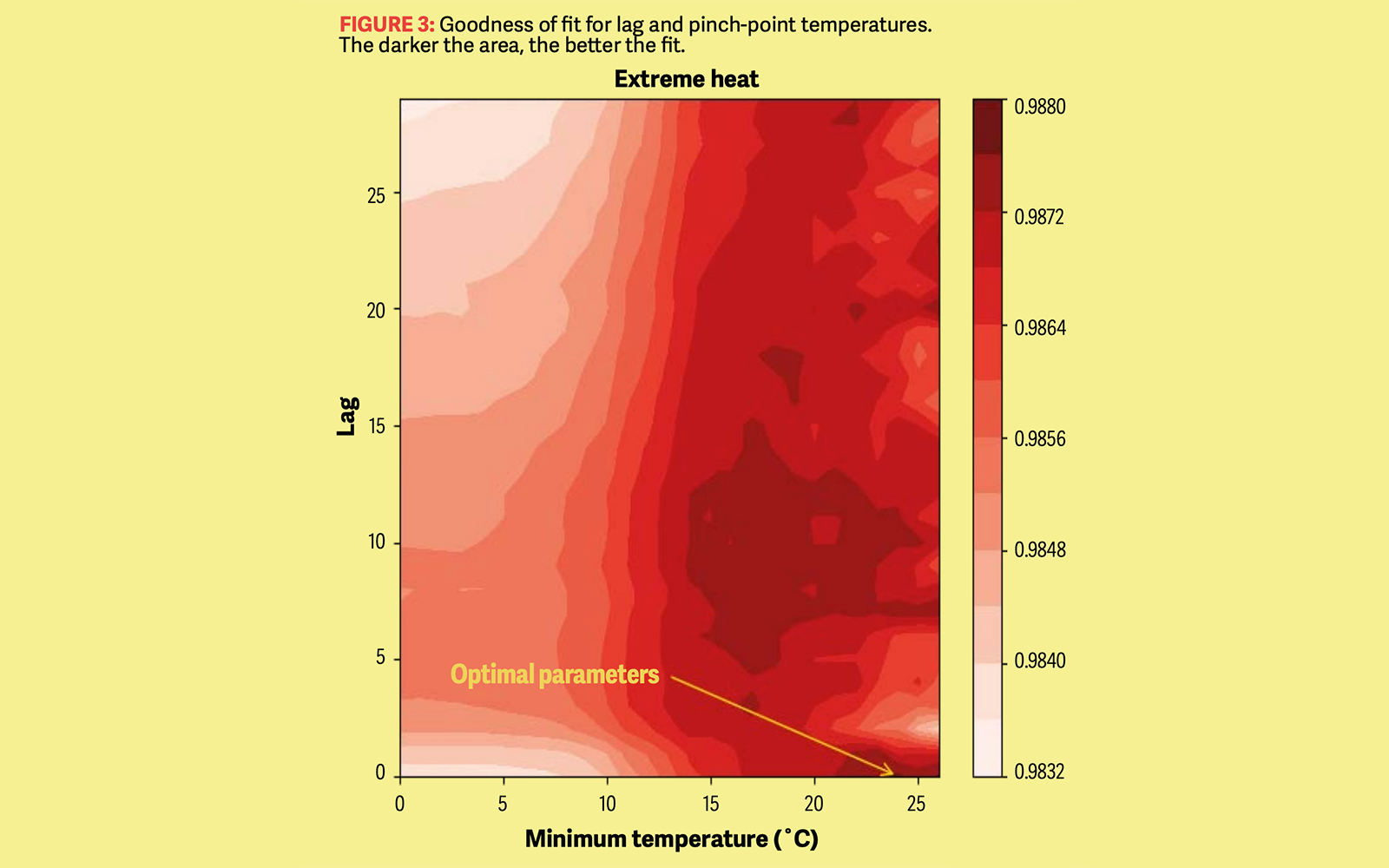 As the planet warms, the frequency of cold events reduces, so fewer people are expected to die from cold-related illness – but this will be counteracted by the frequency of heat-related illnesses as the number of hot events increases substantially. We have focused on hot events here, but both elements will need to be considered – especially for UK insurers with large annuity books, where longevity improvements in winter months could reduce liabilities.

We explored several scenarios created by the temperature model to show how the increasing occurrence of hot events would impact the expected number of deaths. Even in the median scenario, the number of deaths expected to occur on hot event days from 2040–54 is significantly larger 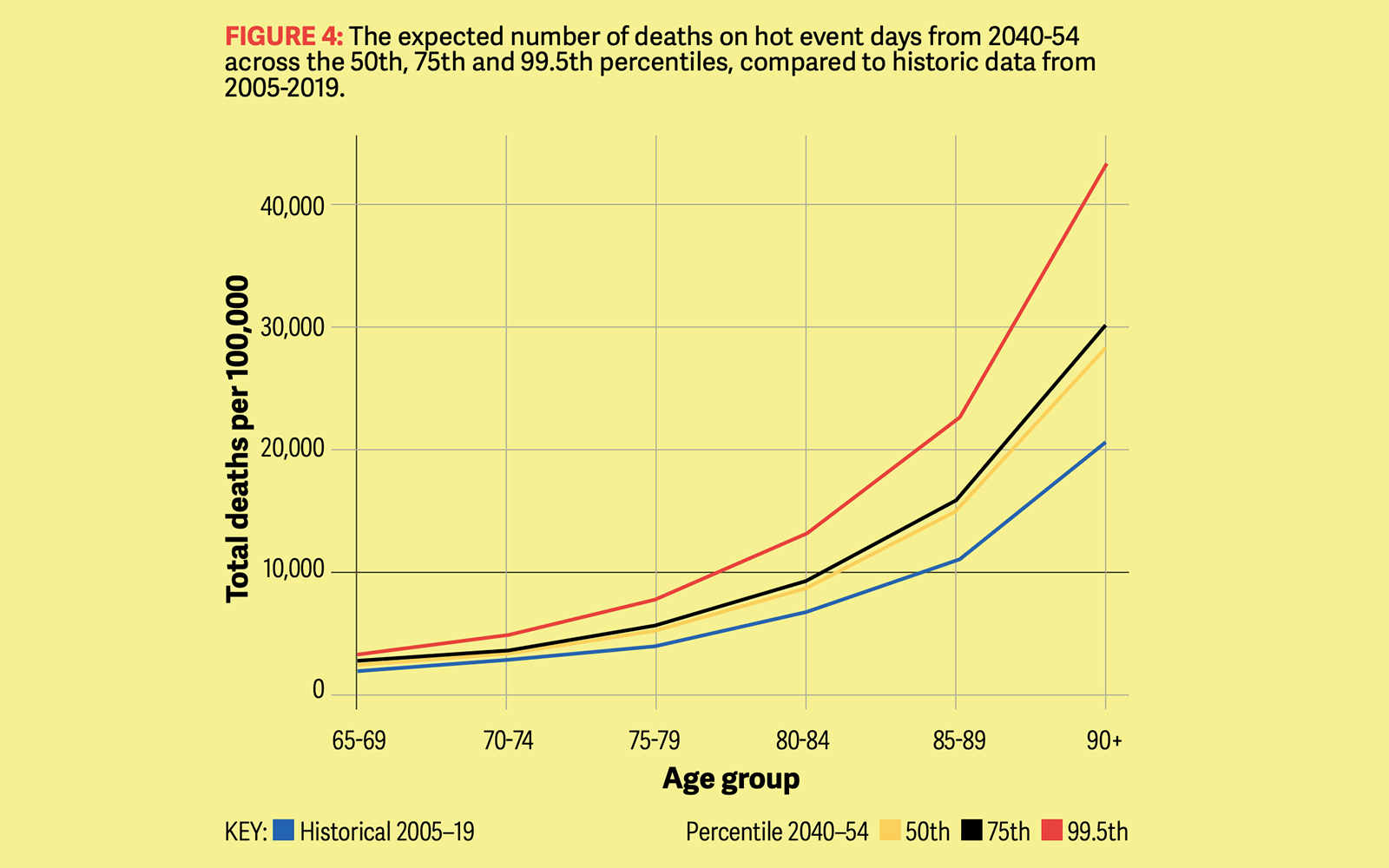 The current analysis is limited by data availability; if we had more data on deaths caused by temperature events, causes of death, and data on actual age rather than age groups, we could create more informative model results. In addition, the current mortality model doesn’t allow for future mortality improvements after 2021, so there will be further considerations about how human physiology and healthcare may adapt to cope with a changing climate.

Are you capturing this risk?

The human impact of climate change is a complex problem, and with research still in its infancy in some areas, it is a challenge for the insurance industry to understand its exposure to these risks. However, while arguing immateriality has been sufficient in the past, increasing regulatory pressure to quantify financial exposures (for example via the insurance stress test) suggests that it’s only a matter of time before more comprehensive climate stresses are required.

We believe it is increasingly clear that the incidence of extreme heat events will grow as UK climate change transpires, resulting in an escalation of heat-related deaths. Companies with mortality or longevity risk exposure should leverage internal and external data to ensure their liability models are capturing this risk and providing the capability to understand how capital positions will be impacted – both today and in the future.

Dan Gill is a client partner at 4most

Rajinder Poonian is a managing consultant at 4most

Alex Harding is an actuarial consultant at 4most