Home or away? Opportunities and challenges 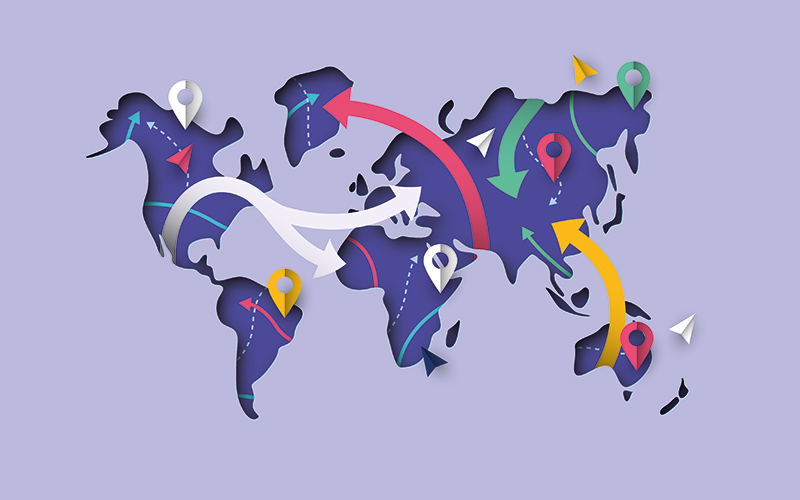 Many actuaries choose to work in a different country. One of the benefits of working with numbers is that they are the same in every place; the mathematical language is universal, and actuarial work is available globally. The IFoA also has ‘mutual recognition agreements’ with actuarial societies all over the world, supporting the creation of diaspora networks. To understand what might lead an actuary to relocate, as well as the processes and difficulties one might face, we spoke to three mid-career expatriate actuaries about their experiences.

Rosie Lee (not their real name) is a reinsurance broker and actuary. Originally from east Asia, Rosie lived in Australia for five years – with three of those years spent at university – and has been living in the UK for the past seven years. She got her first position in Australia through an internal reference and her first job in the UK through her scholarship at graduate school.

Reena Gandesha is originally from the UK, where she completed her actuarial studies. She moved to Dubai seven years ago through an internal company transfer and is currently an executive director.

Tim Harrison is South African. He attended university in South Africa and worked there for six years before moving to the UK five years ago. Tim got his first job in the UK via a LinkedIn application, and currently works in capital operations and strategy.

Relocation decisions are often influenced by university choice. US and UK universities attract many foreign students, and their actuarial programmes are often complemented by exemptions from the national actuarial qualification process. Foreign students then frequently elect to remain in their country of study for their first job. In Rosie’s case, she wanted to pursue education in a more liberal environment than her home country could offer: “The education was more focused on learning how to learn instead of a very textbook-based or exam-based way of learning,” she says.

Other actuaries move for work experience, as actuarial positions abroad may offer better training, higher remuneration, a better work-life balance, greater intellectual challenge or better networking opportunities. This was the case for Reena. “I thought it would be a good learning experience for me,” she says. “I also wanted to go somewhere that would benefit from my knowledge of a more developed market, such as the UK.” With smaller teams and different organisational structures, it has also been easier for her to work with a larger number of stakeholders and projects, gaining exposure to a range of insurance professionals from whom she can learn – a clear early-career benefit.

Tim moved to take advantage of the wider range of specialisation opportunities. “I think smaller markets are good for getting a generalist introduction to a range of topics in the field, but tend not to have the same depth as more mature markets,” he says. “I was specifically interested in capital modelling and the UK seemed like the best place to go to focus on this.”

Culture shock can be an obstacle for many. “In Europe people respect personal space more, while in my home country the boundary between work and personal lives is a bit more blurred,” says Rosie. “Some corporations at home can also be a bit more hierarchical.” Reena needed some time to adjust to the weekend being Friday to Saturday, while Tim believes South Africans are generally more frank and outgoing than the British. “This was sometimes challenging because people thought I was rude when I was simply being direct,” he says. “And I thought they were often very cryptic!”

However, some things make the transition easier. For Tim, similarities between the UK and South Africa have enhanced his moving experience: “The countries are relatively similar, since South Africa was partially a British colony for many years.” For Reena, it helps that she moved to a city of mostly expatriates: “The working culture is slightly different; however, everyone is extremely friendly and helpful, which makes the process of integration very smooth.” Her biggest challenge, on the other hand, has been uncertainty. “COVID-19 posed a big challenge,” she says. “Travel restrictions meant not being able to go back to the UK to see my loved ones.”

Rosie’s biggest challenge has been building a sense of security and trusted relationships with people from different cultural backgrounds. For Tim, too, building a new professional network and making new friends has required a lot of effort. “It took a couple of years before I started to feel like I was making good progress in this,” he says. “I probably still have a better professional network in South Africa, and more friends there than in the UK.”

Expatriate actuaries often decide to repatriate – what would compel Rosie, Reena and Tim to do so?

Rosie would move back to Asia when her parents are older, while for Reena there is no place like home and she knows she will move back to the UK at some point. “The UK has one of the most developed insurance markets in the world, with things still developing at a rapid pace,” she says. “I would be very interested to come back to learn and build on my experiences in the Middle East.” If Tim left the UK, it would likely be to take up another role in Europe, or possibly the US.

Returning actuaries bring back the knowledge, skills and experiences they have harvested during their time in foreign markets. These often provide a head start for their post-repatriation career and support them in landing elite jobs on the local market.

Anastasia Anastassiades is originally from Cyprus. She studied in the UK and worked there for 11 years before returning to Cyprus 12 years ago because of the 2008 financial crisis. She is now a senior actuary and has served as a non-executive director.

“Although I enjoyed working in London immensely, it became different after 2008-9 and many people became more xenophobic, especially in the banking industry where I was working at the time,” she says. Her concerns, plus a great employment opportunity at home, validated her decision.

Anastasia found the opportunity in Cyprus through contacts from her university years and advises that an overseas actuary wanting to eventually repatriate should keep in touch with their local network and actuarial society. In addition, she says, “they should be flexible to work around the globe before they return. Their experience abroad is valuable and shows the employers that they are not just looking for the comfortable solution of coming back but have something to bring to the company.”

Working with larger employers abroad has brought Anastasia valuable insights into working as part of a team, as well as on difficult, interesting and varied projects. “However, the downside is that many larger employers will pigeonhole you into a single task,” she notes. She believes it is important to take opportunities abroad, and with a number of employers, in order to work on different projects. She cautions against focusing on just one skillset.

Moving back is an individual decision for everyone. For Anastasia, “from a work perspective, working for a smallish employer gives you the opportunity to explore different and interesting projects, and is certainly not repetitive. From a personal perspective, being an outdoors person, in Cyprus you have the sea and the mountains at your doorstep.”

Returning has not been without challenges, though. Coming back at a later age means starting to build a home and a life much later, when everyone else has already settled down. “From a salary perspective, you also need to adjust quickly to the reality of Cyprus,” she says. “Being a qualified and experienced actuary in the UK pays significantly higher salaries, which more than compensates for the higher cost of living there.”

Nefeli Pamballi is a consulting assistant manager at EY

This article appeared in our June 2022 issue of The Actuary.
Click here to view this issue
Filed in
General Features
Topics
Global
Careers