Ibrahim Muhanna looks at the state of the actuarial profession around the world, and considers what it might take to narrow the gaps in resources 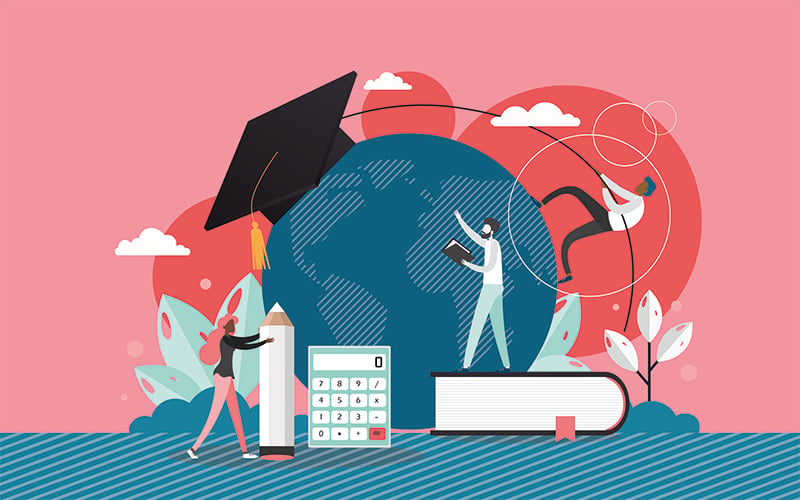 Some nations have fewer actuaries than others, and it does not take a genius to see why. Historically, actuaries answered to the needs of the insurance and pension industries. There are three themes among countries with fewer actuaries as a percentage of their population: less developed insurance industries, generous social security, and large informal sectors.

Let’s look at the number of actuaries as a proportion of working-age population in 20 countries. The first group of associations are full member associations (FMAs) of the International Actuarial Association (IAA). They have established professions, and members mostly work locally. 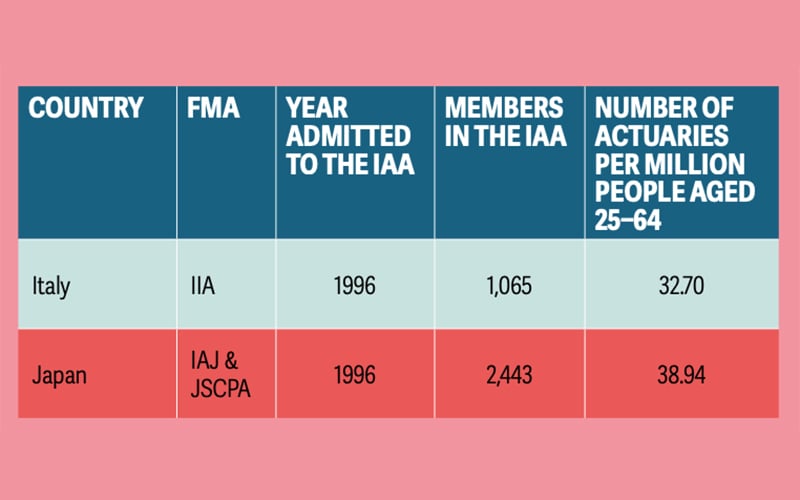 The second group of associations are also FMAs, but from countries with markedly different insurance industries and social security systems. 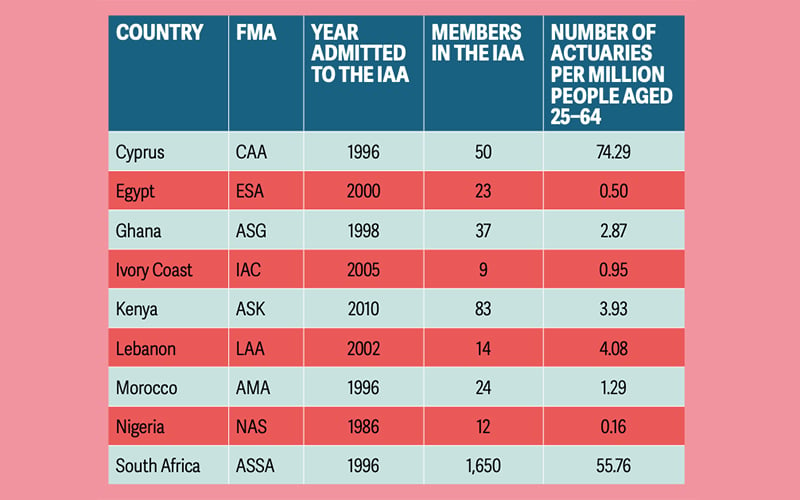 From the second group, Cyprus and South Africa have higher ratios than countries in the first group.

In addition to better-developed insurance markets and private pension schemes, another driver for the high ratios in these two countries could be the fact that some local actuaries work outside of their countries.

The high number of university programmes in Ghana, Kenya and Lebanon, coupled with their strong insurance and pension regulatory regimes, place these countries on the right path of actuarial development. On the other hand, Morocco, Ivory Coast, Egypt and Nigeria do not yet appear to be actuarially self-sufficient. 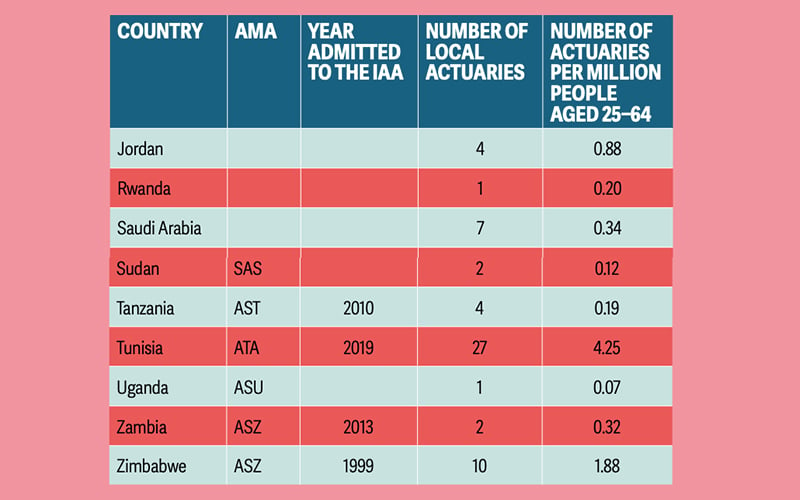 Tunisia and Zimbabwe are the clear outliers in this group.

I believe this is testament to their local actuarial associations’ vibrant energy and efforts, and to their well-developed university programmes.

Interestingly, there have been actuaries working in Jordan since 1973, in Saudi Arabia since 1979, in Sudan since 1994 and in Rwanda since 2010. However, the authorities in Jordan, Rwanda and Saudi Arabia did not facilitate the establishment of local actuarial associations. Authorities should encourage local associations to apply for full IAA membership. As we’ll see below, with full membership, local credentials become more recognised by regulators and other stakeholders.

Some of the ‘actuarial gap’ between these groups is explained by low demand. Many local insurers in the ‘less actuarial’ countries operate like brokers, and often view actuaries as a tax rather than an added value. The number of private pension schemes are also limited due to generous mandatory social security systems.

We must also look at the supply side of the gap. Except for the Actuarial Society of South Africa, all other associations in the 18 countries in groups 2 and 3 rely on university-based actuarial education and on overseas actuarial qualifications.

In these countries, thousands of students have successfully completed actuarial university degrees, but only a few hundred have been admitted to their local associations as qualified actuaries. There are two main reasons for this.

First, the local regulatory regime may not recognise an actuarial qualification unless it is from the IFoA, the Society of Actuaries (SOA) or a similar association. Second, the level of university education in the home country may not satisfy the minimum syllabus requirements set by the IAA.

This brings us to the challenges of sitting IFoA and SOA actuarial exams. The first challenge is cost, which has been partially addressed by the IFoA and SOA. However, in my opinion, fees should be reduced much more for students from lower-income countries, at least for the first few exams.

The second is language: students who do not speak English as their first language tend to read, write and type English more slowly. I do not believe it is fair for them to be allocated the same amount of time for the exams. I would suggest a stepped approach for students from countries in which English is not the mother tongue, with 30% additional time for the first few exams, reducing to 20% and then 10% for the more advanced exams.

All hands on deck

Additional support from associations such as the IFoA and the SOA cannot resolve everything. To help the actuarial profession grow, blossom and become self-sufficient, local stakeholders need to play their part.

First, local actuarial associations need to engage with regulators and employers, and highlight the value of the actuarial profession. They need to help employers understand that actuaries are not just number crunchers but professionals who can make sense of figures and put a price on the future. Actuaries can be not only the brains of an organisation, but also its conscience and safety valve. They should be valued as an asset, not a liability.

Second, universities should proactively work with local actuarial associations, regulators and employers to understand how to structure their actuarial programmes and decide on a maximum number of students to admit annually to ensure high quality of instruction. I encourage universities to have practising actuaries as part-time professors among their faculty, as they can serve as professional advisers and stewards of the local industry’s hiring needs.

An actuarial career is a lifelong learning journey. University degrees and actuarial qualifications should not be viewed as the final destinations, but as keys that unlock opportunities of continual development – for ourselves and for others.

Ibrahim Muhanna is the founder of the first independent actuarial consulting firm in the Arab world. In 2007, he was awarded the National Order of the Cedar by the Lebanese president, and in 2020 received the International Actuarial Consulting Association Max Lander Lifetime Achievement Award

This article appeared in our June 2022 issue of The Actuary.
Click here to view this issue
Filed in:
General Features
Topics:
Soft skills
Global
Careers