Regulation: The pursuit of harmony

Ahead of an expected European Commission investigation, Pieter Bouwknegt, Danny Dieleman and René Doff set out how mortgages are treated differently under European banking and insurance frameworks 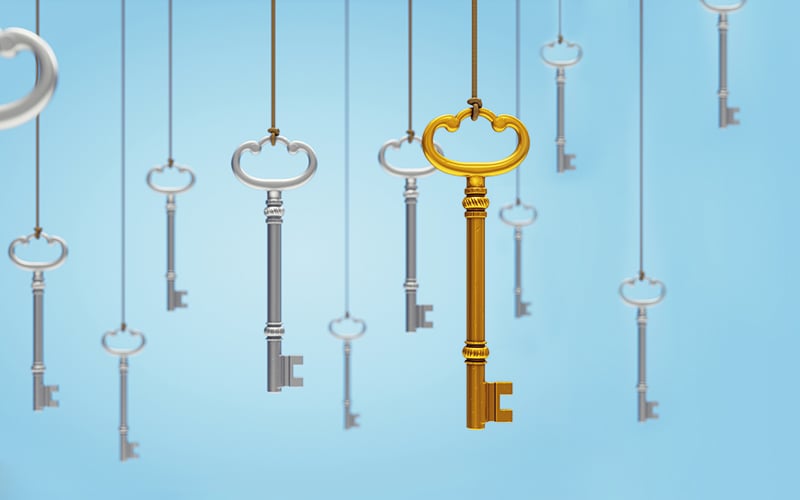 The mortgage is an important driver of an economic system. The Netherlands is the fourth-largest mortgage market in Europe, which is surprising given its relatively small population of 17.4 million. Banks, insurers and pension funds are the nation’s main mortgage suppliers, with respective market shares of 62%, 17% and 11% respectively. The prudential frameworks for these players differ, and the European Commission has recently launched an investigation into the possibility of harmonising credit risk-related capital charges for banks and insurers in the EU. With this in mind, let’s take a look at the current EU frameworks for banks and insurers, and whether differences in mortgage treatment could lead to undesirable competitive disadvantages.

Banks are the dominant mortgage suppliers. Their business model focuses on short-term funding to finance long-term mortgages. The maturity transformation also includes a liquidity transformation, as funding is often on-demand (deposits) and mortgages are fixed for a longer term. This effect is well-researched in the academic literature.

The insurers supplying mortgages, on the other hand, are mostly life insurers with long-term liabilities, which are not on-demand. This creates a different interest rate and liquidity mismatch to those of the banks, even though the mortgages issued are identical in nature. 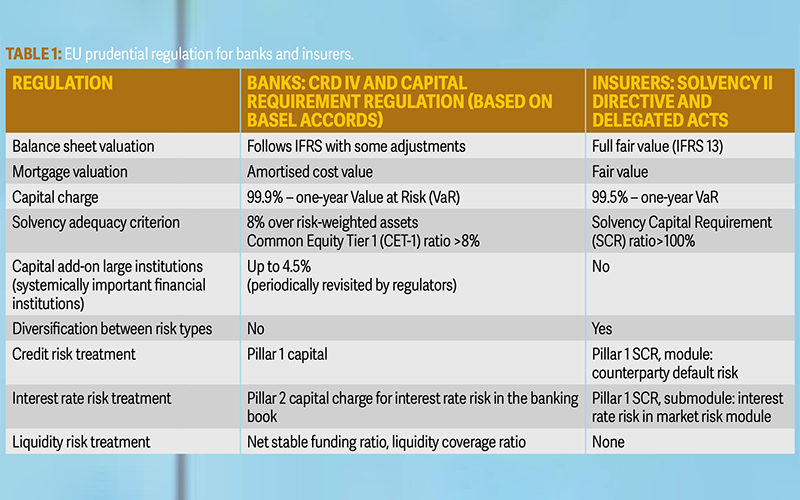 Prudential regulation differs significantly between banks and insurers; Table 1 shows the relevant differences. We note that the Basel Accords for banking have global implications, but in the EU they have been implemented via the Capital Requirements Directive (CRD) IV and the Capital Requirement Regulation proposed by the European Commission, which also prepared the Solvency II Directive.

The valuation methods used in the CRD VII framework for banks follow IFRS, including the credit loss provision rules that are found in IFRS 9. Generally, banks use the option to value mortgages based on amortised costs. For expected credit losses, deductions are applied depending on the state of the mortgage.

For insurers, the balance sheet valuation for prudential purposes is based on fair value. Insurers value the cashflow pattern until the end of the interest rate fixation period, including the pre-payment option. The yield curve that is used to discount future cashflows is based on transactions with mortgages that can be observed in the market; in the case of the Netherlands, this boils down to the commercial rates for new mortgages and includes an allowance for credit losses. This valuation method causes volatility in the insurer’s balance sheet, mainly because of changes in the commercial mortgage rates. For fully duration-matched mortgage portfolios, a change in the swap rate will be neutralised by an identical change in the liabilities. However, changes in the specific (commercial) spread between commercial rates and the equivalent swap rate can be caused by pressures in the mortgage market. In this case, there will be no corresponding changes in liabilities, and these changes will have a direct impact on the value of the mortgages and therefore on the own funds of the insurer. This is a major difference between the valuation methodologies of banks and insurers.

In Pillar I, banks use the loan-to-value (LTV – the ratio between the loan amount and the value of the house)  as a key credit quality indicator. There are risk weightings per LTV range in the case of mortgages varying from 20% (LTV ≤ 50%) to 70% (LTV ≥ 100%). The total credit risk charge under Pillar I equals 12.5% of risk-weighted assets – in other words, the risk weighting multiplied by the (amortised costs) value of each mortgage.

There is a similar structure in place for insurers, although the details differ significantly. For mortgage loans that have an LTV of greater than 60%–80%, a loss given default of 15% is assumed as capital. Mortgage loans that have lower LTV rates have no Solvency Capital Requirement (SCR) charge. As we have explained earlier, however, the spread between commercial mortgage rates and the swap curve drives the valuation of the mortgage (and therefore the own funds). As such, the volatility of this spread could lead to an implicit capital charge via the own funds to avoid SCR breaches. Diversification effects are allowed, first within the counterparty default risk module and subsequently between the various (sub) risk modules of the SCR framework.

For banks, interest rate risk in the mortgage book creates a capital charge in the standard approach of Pillar II. The value of future cashflows is discounted by a yield curve. This yield curve is not prescribed, but many banks use the swap curve in practice. The standard approach prescribes determining the impact under six scenarios, encompassing parallel upward and downward shifts, and also changes in the steepness of the curve.

For insurers, the interest rate risk module in the SCR (Pillar I) is determined by the maximum of an upward or downward shift of the curve. The extent of the shift is prescribed in the regulations.

Comparison of the frameworks

To compare the two frameworks for banks and insurers, we have designed a simplified model and assessed the capital requirements under the standard approach. We tested the robustness of the capital outcomes for variations in the core risk parameters: LTV and interest rate fixation period. We addressed the balance sheet valuation and the required capital separately because they are both impacted by the risk parameters. We did not assume capital charges for other asset risks, but for the insurer we did include capital charges for the liability risk (in other words, insurance risks) to reflect that the funding of assets stems from insurance liabilities. A different assumption on this risk can increase or decrease the SCR. 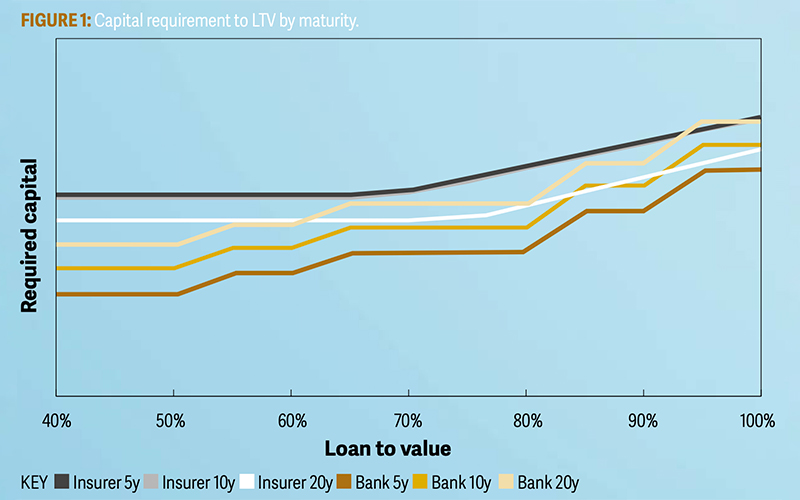 “In September 2021, the European Commission stated that it is considering aligning the banking and insurance frameworks for mortgages”

The key question is whether the exact differences in treatment are justified by the differences between the two business models. Assuming there are no differences in credit loss patterns (ceteris paribus) between banks and insurers, there is no real rationale for there being different outcomes, other than, potentially, the gap in the solvency ambition (99.9% for banks versus 99.5% for insurers). Banks will typically write the shorter-term mortgages and insurers will write the longer-term mortgages, which is in line with our expectation. We think this is a result of business model differences, rather than regulatory arbitrage.

In September 2021, the European Commission stated that it is considering aligning the insurance and banking frameworks for mortgages by aligning the Solvency II framework in the standard formula counterparty default risk module with the credit risk framework for the banking sector. This alignment will take a micro-perspective on the credit risk-related capital charges only, exploring possibilities for extending the banking framework to insurers. This would introduce more LTV buckets for insurers than there are currently, complicating the framework slightly.

However, a micro-perspective on its own would ignore other elements in the capital requirements calculation, such as the interest rate risk and valuation differences. The valuation methods differ so dramatically that the risk parameters – the LTV and the interest rate fixation period – drive the valuation for insurers but not for banks. As the ultimate CET-1 ratio or SCR ratio will be driven not only by the required capital but also by available own funds, valuation methods are a key component in the regulatory framework and should also be considered. Sub-optimising only one component will leave the problem unsolved.

Mortgages are treated differently in the regulatory frameworks of banks and insurers, and the system is more complex in both frameworks than it would first seem. As well as credit risk, interest rate risk and balance sheet valuation of mortgages play an important role in the ultimate capital charges. For banks, liquidity considerations must also be included. The current differences in the framework cause outcomes that are to be expected and can be explained by business model fundamentals.

Both banks and insurers are attracted to separate segments of the mortgage market and will adjust their commercial rates accordingly; this creates a healthy consumer choice rather than regulatory arbitrage. Should the European Commission decide to pursue a harmonisation attempt, this should be holistic, rather than only taking the micro-perspective, which would create the risk of sub-optimising.

This article appeared in our May 2022 issue of The Actuary.
Click here to view this issue
Also filed in
General Features
Topics
Risk & ERM
General Insurance
Regulation Standards