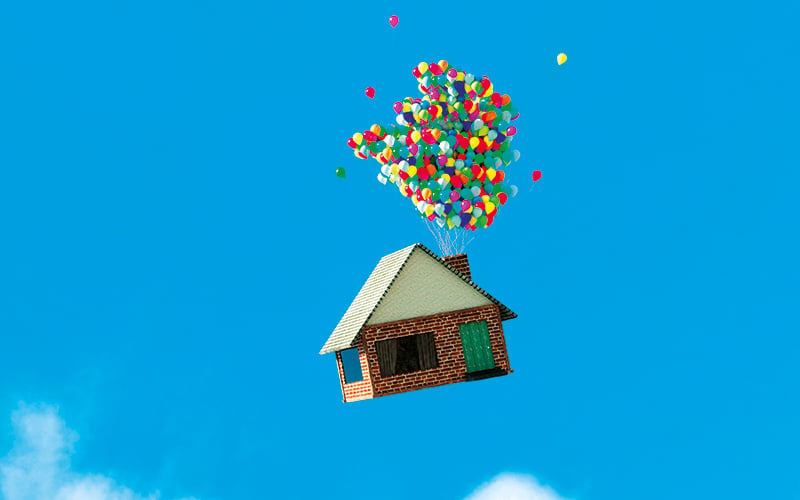 In many countries, there could hardly be a more perfect storm for individuals who are approaching their retirement: low interest rates, longer life expectancies, older state retirement ages, no access to defined benefit schemes and likely insufficient defined contribution plans mean that many retirees are being forced to tap into alternative funds to finance their retirement. This could be equity in their main residence, a buy-to-let property, a family business, and so on. We refer to this wider range of assets as ‘household assets’, and they can include almost anything – even a work of art. Retirees will also have varied retirement needs; some will want to spend generously on themselves, while others might want to leave wealth to subsequent generations.

A lack of advice

Despite experience with defined benefit schemes, actuaries are much less involved with the decumulation (selling off and spending) of defined contribution pensions, and certainly with the complexities of decumulating entire household assets. Nevertheless, the problems are considerable, and the lack of co-operation between pension actuaries and financial advisers has left a void in the field of financial advice. This now appears to be filled by advice that is more focused on fund investments and less, if at all, on household outcomes.

With this in mind, I decided to do some research. My aim was to develop a framework for advising individuals, both before and after retirement. In the following example I focus on maximising retirement spending, but the approach can be adapted to other objectives.

A couple in their late 50s plan to retire in their mid-60s, and have set out three retirement goals:

The couple specify the assets in question: ISAs and self-invested personal pensions, a plan to eventually downsize their main residence when necessary, a buy-to-let property that is rented out to provide income, and a small family business that is to be sold before retirement.

Although the couple will receive the state pension, I propose not to include it in the projections. At an individual level, there is no way to build mortality into the analyses other than to plan broadly on the basis of life expectancy. As the years go by, liabilities will continue further into the future, reducing the ability of the assets to provide adequate income. Further exacerbating this will be the potential cost of long-term care. Accordingly, the buffer provided by the state minimum pension along with, in the extreme, the sale of the retirement home, will provide a cushion against these potential costs.

All risky assets are modelled stochastically. Rental yields are modelled as a fixed percentage of the (variable) rental property value. For inflation, a fixed long-term assumption is used, as actions by central banks to maintain price stability might make predictions about its future statistical distribution unreliable. Attempts to model future inflation would be difficult, but a good compromise is to use a fixed inflation assumption and ensure that real assets (equities, properties and inflation-linked bonds) are used to back real liabilities.

We start by putting together three risk-weighted portfolios – low, medium and high-risk – made up of low-cost index funds and select managed funds. These portfolios will be appropriately invested in during the accumulation and decumulation phases, giving regard to the client’s risk appetite. In current economic conditions, these portfolios might have expected rates of return of 2.5%, 4.5% and 6.25% respectively.

A sensible interpretation of the couple’s objective (3) could be to maintain a 95% probability of not running out of money throughout their lifetime. Maximising a fixed, real monthly spending level subject to this constraint, the couple could spend £3,450 per month, plus £7,500 per annum for holidays. As Figure 1 shows, at this level of spending, under the 5th percentile outcome, the couple would still not run out of money.

The yellow layers in Figure 1 show the various decumulating assets deterministically calculated using the expected return. The grey shaded area between the green and red stochastic lines represents 90% of all outcomes. The red line is the 5th lower percentile, which, in our statement of the problem, can’t be negative. 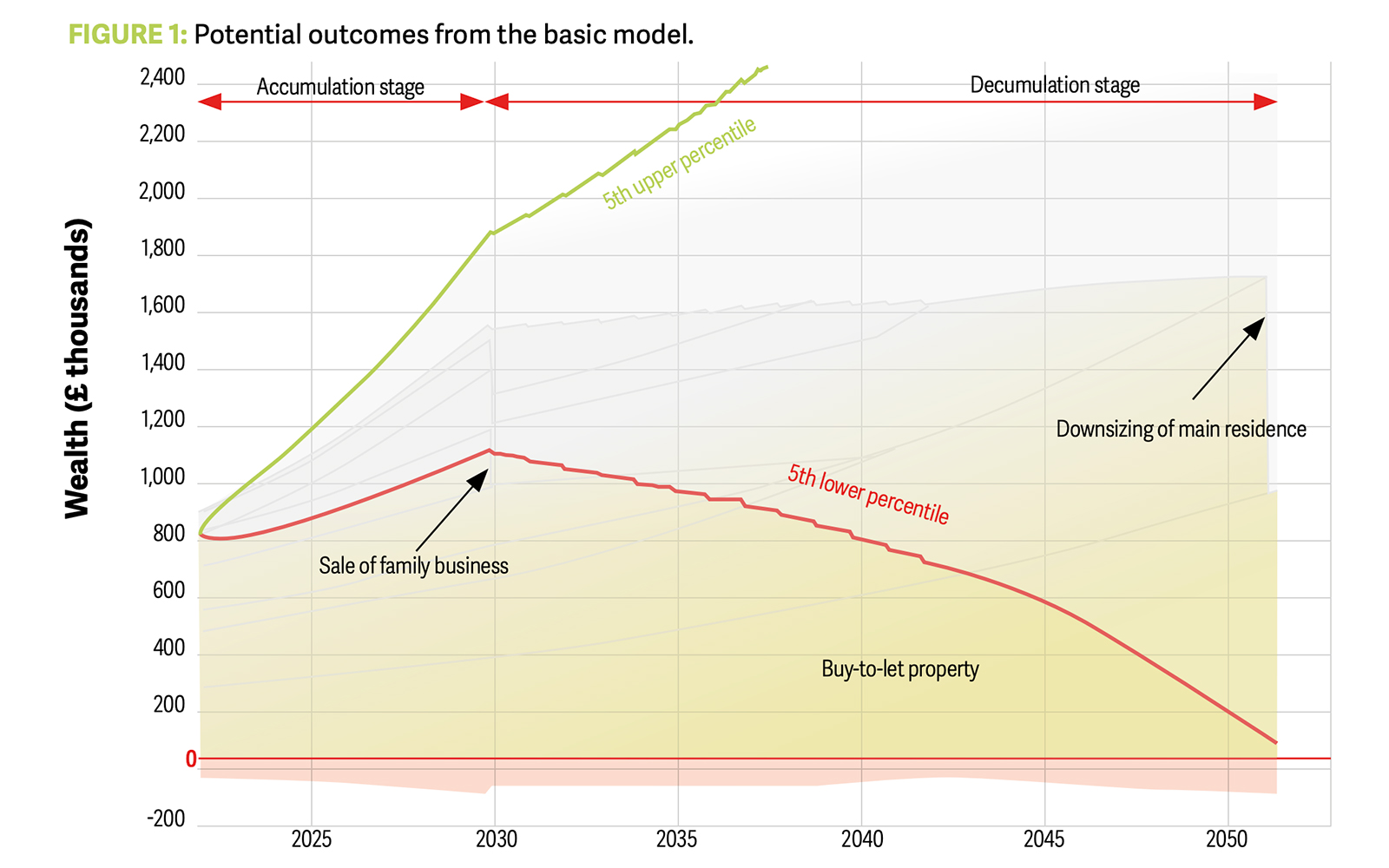 Figure 1 shows the difficulty of the exercise: the range of possible outcomes is so broad that making any form of long-term prediction seems futile. Furthermore, the requirement to protect against catastrophe is a permanent barrier to releasing capital. To make sure that the lower 5th percentile remains positive, the level of spending must be set at a prudently low level. As a result, the expected scenario sees downsizing happen very late in retirement and the buy-to-let property never sold. From the client’s perspective, this is disappointing, as it fails in all but one of their retirement goals. In most scenarios, including the expected scenario, a significant amount of their wealth is left to waste, or kept until too late in their retirement to be of benefit.

There is, however, an alternative: focus on spending (Table 1). We start by asking the clients for a minimum level of spending required to ensure a reasonably comfortable retirement (say, £2,500 per month, inflation-linked). We then work on a contingent spending plan, where the clients are allowed to increase their spending contingent on asset investment returns. Note that the £2,500 per month represents a minimum and is lower than the £3,450 per month plus £7,500 per year found from the previous projection. 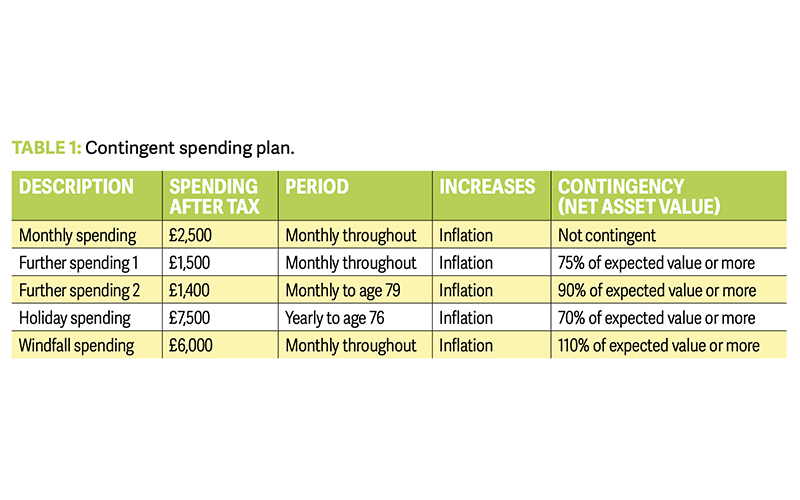 The contingencies are based on the actual level of the assets relative to their projected expected level, and they are monitored throughout retirement.

Figure 2 shows what is now an entirely different outcome. In all scenarios, the assets are almost completely depleted. The 5th percentile remains positive, but the 95th percentile also sees the majority of the couple’s assets decumulated. In addition to meeting retirement goal (3), this approach much better meets goal (2). 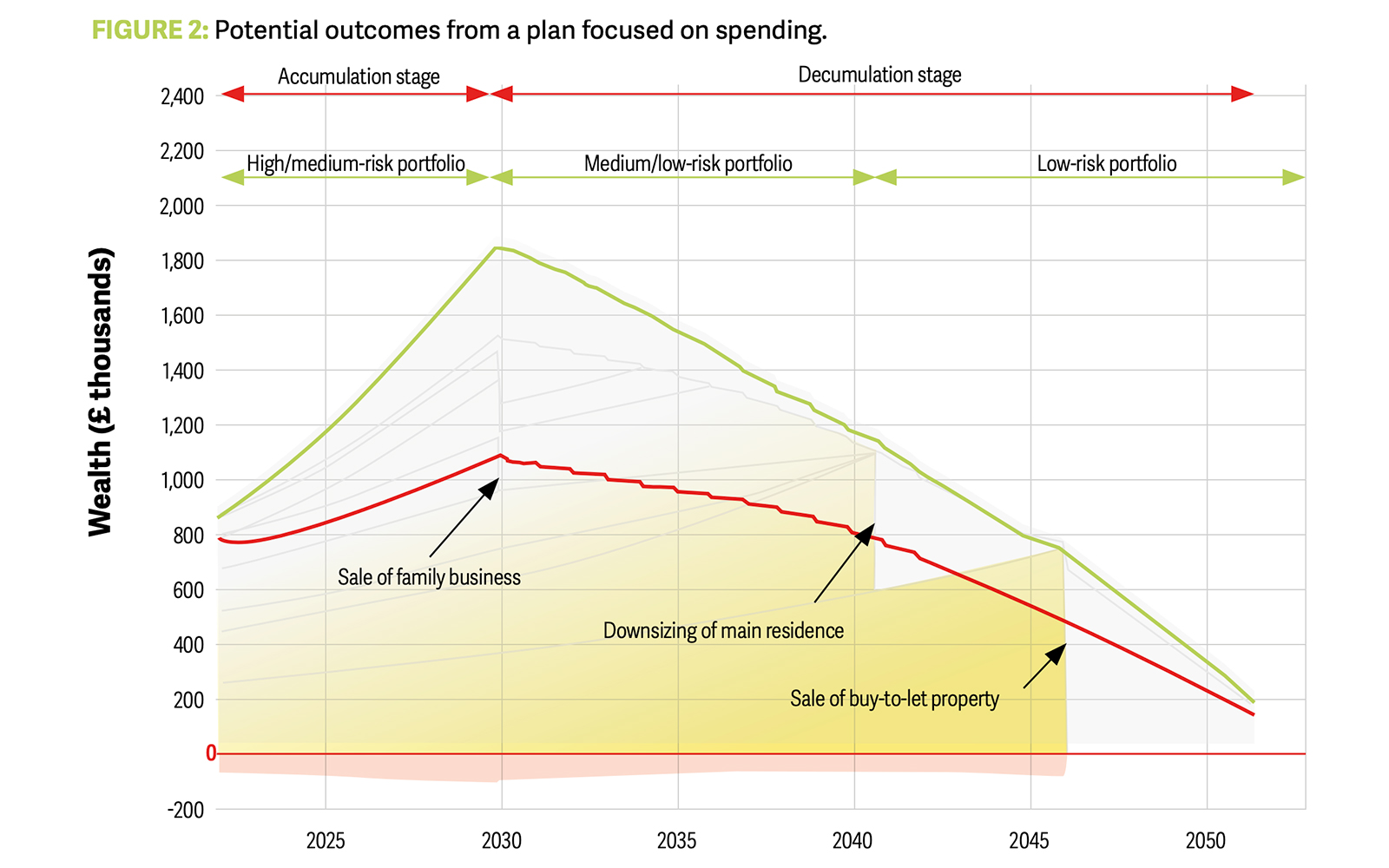 Remarkably, the only difference in input between this and the previous projection is the spending. Capital uncertainty has been replaced with structured spending. Table 2 shows the probabilities associated with the projected spending allowance. 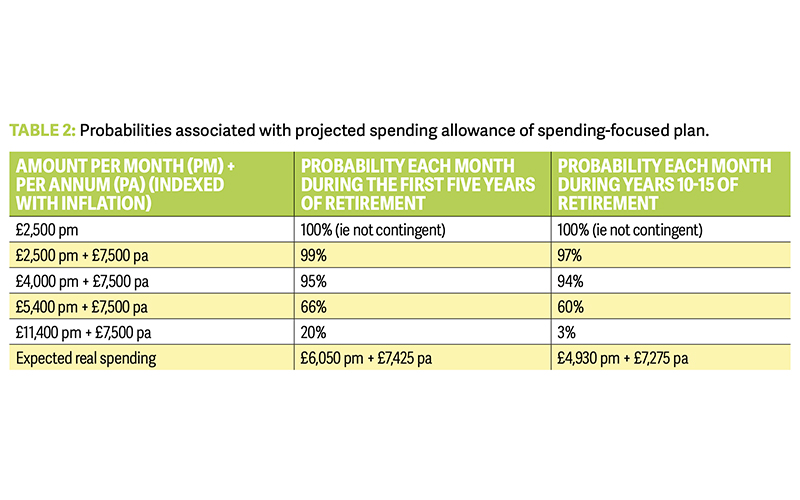 The expected spending allowance has increased substantially from the first projection, and is more concentrated towards the early years. This is much closer to the achieving the couple’s retirement goal (1).

You describe this to the adviser and provide a probability chart to give the client enough time to put illiquid assets on the market before the lack of cashflow forces the sale. From Figure 3, for example, the couple are safe in the knowledge that, even in the worst case, they would not need to downsize until the mid-to-late 2030s. 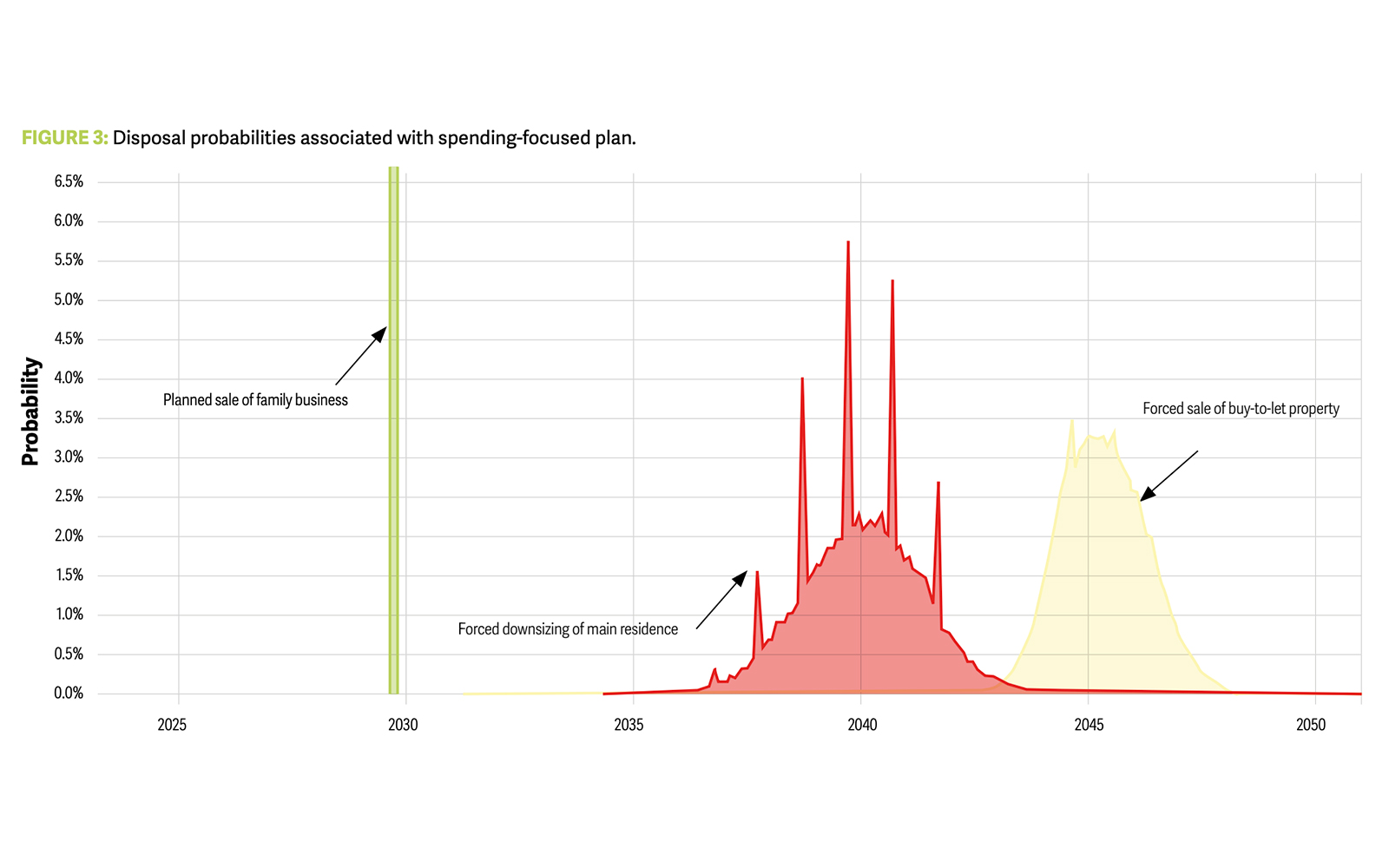 You explain to the adviser that, as part of the annual review, the client should be provided with an update to the projected outcomes, including a spending review, to ensure everything remains on track.

Sadly, few people, if any, have access to this level of advice; most are left fumbling in the dark. I believe that defined contribution pension providers could work much more closely with their members and/or with the financial adviser community to bring more structured planning to the decumulation of household assets in combination with defined contribution pensions.

Defined contribution arrangements are inherently risky for the retiree, and the introduction of alternative household assets into the mix only serves to heighten those risks. How these assets are managed could make all the difference. Let’s hope this can provide a starting point for more dialogue.

An example client report based on the above scenario is available at www.investandproject.com/report.pdf

This article appeared in our May 2022 issue of The Actuary.
Click here to view this issue
Filed in
General Features
Topics
Investment
Pensions