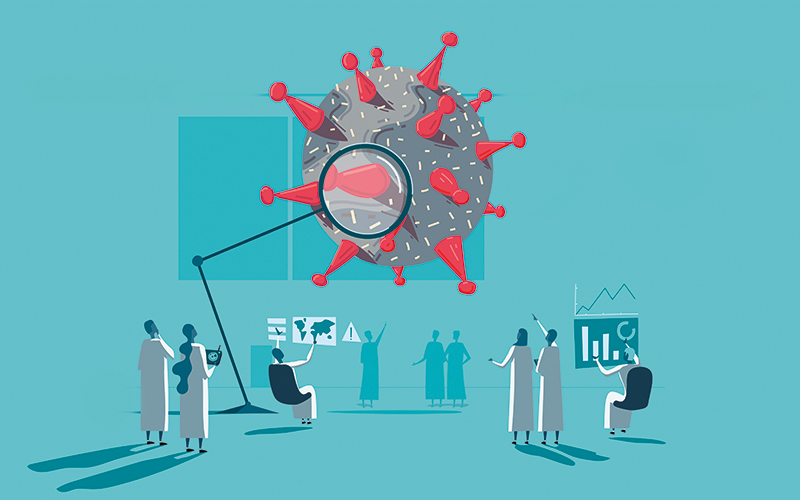 The world may be far from declaring COVID-19 endemic, but with increased levels of vaccination and rising herd immunity, we are inching ever closer to endemicity in individual countries. Current research suggests that the Omicron variant is less severe than the Delta variant; there is real-world evidence of shorter hospital stays for Omicron patients, and fewer requiring ventilation support or intensive care. So what does the post-pandemic world look like, and how much of a threat does COVID-19 continue to pose?

Since the pandemic began, resurgent waves of infections have been fuelled by increasingly deadly variants, as the native virus evolved into the Alpha, Beta and then the highly transmissible and lethal Delta. Around the world, different variants took hold at different rates; South America, in particular, had a very different experience to the rest of the globe, with variants that mostly stayed on that continent. The consensus from COVID-19 experts globally was that the next variant after

Delta would be a descendent of Delta. Delta was globally dominant, had very high transmissibility, and bypassed immunity from vaccines or previous infections. However, Omicron was in fact found to be a descendent of Alpha plus Beta plus new mutations.

The Omicron variant is thought to have emerged from an immunocompromised person with untreated HIV in South Africa. Real-world evidence confirmed that Omicron was spreading rapidly – much faster than any variant we had previously seen (Figure 1). Omicron’s prevalence was high in South Africa’s young and unvaccinated population, and within a matter of weeks it was substantially outcompeting and then displacing the dominant Delta variant. The interesting and positive development was that, despite mass infection, hospitalisation rates did not increase as much they had as during other waves. While the virus remained highly transmissible, this new iteration appeared to be less lethal. The infections were predominantly in a younger population that had shown higher levels of recovery from previous infections, and this may have led to the less worrying outcome. 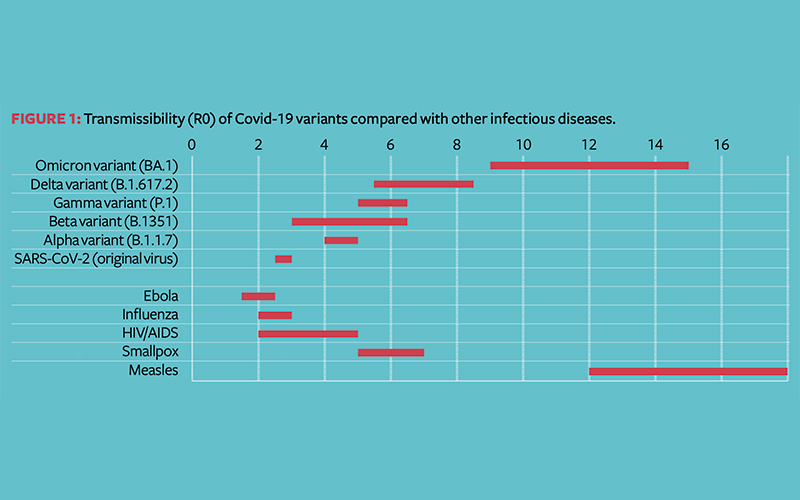 A sub-variant of Omicron, BA.2 (informally named ‘stealth’ Omicron), was reported in Denmark, Norway, the UK and western Australia, and was even more transmissible than Omicron. Viral mutations are a way of life and should be expected. There will always be a residual risk that the variant du jour threatens global progress and reverses some of the progress that the global community has made in fighting COVID-19. Now, however, there are reasons to be optimistic – vaccines can be updated, immunity through T-cells after previous infection remains, and the world has two years of experience in how to work during a pandemic. But if a new variant were to arise tomorrow and be descended from Gamma or Lambda (previously only seen in the Americas), there would be added uncertainty around how Omicron infection would protect people against the rest of the COVID-19 ‘family tree’.

An endemic disease, by its very nature, is expected to maintain a steady, predictable and sometimes cyclical presentation – a far cry from the haphazard peaks and troughs of a pandemic. In its endemic form, COVID-19 could theoretically become less virulent and transmissible. It would run through the population with asymptomatic or mild symptomatic illness, thereby periodically topping up one’s antibodies and maintaining herd immunity. That is not to say that mortality would no longer be a concern: clinically vulnerable individuals and the elderly would continue to remain at risk. The hope is that regular vaccine schedules should eventually result in COVID-19 becoming a concern similar to influenza for such people.

Annual booster shots and new vaccines would be rolled out year-on-year, as with the flu vaccine, and instead of discussing the annual flu season, public health planning would refer to the respiratory virus season and the triple concerns of pneumonia, influenza and coronavirus. This is very much contingent on a range of factors – from vaccine effectiveness and uptake to the emergence of new variants. Endemic does not automatically mean ‘mild’ or ‘unimportant’. It is, however, the hope and expectation of many scientists that we eventually ‘come to live with’ COVID-19 in the way that we live with the flu virus.

As we have seen during the northern hemisphere’s 2022 winter period, subsequent winters will see both flu and COVID-19 seasons collide, in what the media has dubbed ‘flurona’. These will likely be marked by deaths in susceptible populations that are worsened during a bad flu season. While most countries have slowly relaxed the rules for mask-wearing and social distancing, individual and societal behavioural changes in maintaining these protective measures should help to reduce the risk of onward transmission, and therefore the level of infection.

Only time will tell how societies treat respiratory viruses in the future. While no one expects lockdowns to deal with the annual flu season, questions remain. Has mask-wearing become a part of global culture? Will an acceptance of home working help break the chains of transmission? Will people choose to isolate when symptomatic, even if they are otherwise okay? All these public health measures must be weighed against political, economic and social interests.

Vaccines have been key in the fight against COVID-19, reducing the number of people vulnerable to severe disease or death. However, in a state of endemicity, immunological resilience may be built by infection and recovery. The current vaccination strategy of administering multiple doses a year to the general population appears to be unsustainable as the volume of immunologically naïve – those who have never been exposed to the virus or vaccinated – declines. Rich countries continue to acquire large volumes of vaccines, but many others are still waiting for their first or second doses from schemes such as COVAX. As more people become infected or are vaccinated, highly vaccinated countries may have less need for vaccination, which should make more doses available for countries with lower vaccination rates. Additionally, if milder variants continue to circulate, the need to vaccinate the generally healthy population across the world will be minimised.

In the past year, the growing arsenal of therapeutics in the fight against COVID-19 has been positive (Figure 2). To supplement vaccination strategies, repurposed medications such as monoclonal antibodies (mAbs) and the corticosteroid dexamethasone were deployed. The US is widely prescribing the latter for symptomatic treatment of mild-to-moderate symptoms, with the aim of reducing hospitalisation and treating symptoms in community settings. However, across Europe, mAbs are more commonly prescribed in hospital settings for severe disease to limit intensive care treatment, ventilation and risk to life. Vaccine hesitant or vaccine-ineligible individuals may opt to take monoclonal antibodies instead of vaccines, which could reduce hospitalisation and mortality risk. 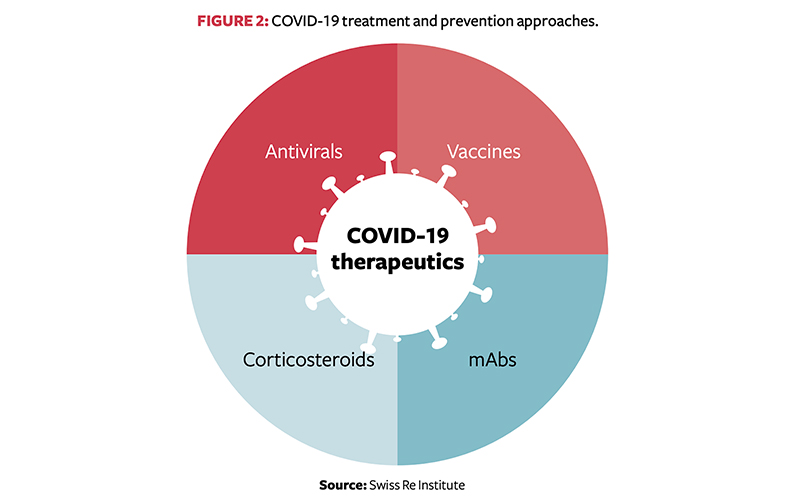 Towards the end of 2021, two new antiviral treatments – molnupiravir (Merck) and Paxlovid™ (Pfizer) – appeared on the market, resulting in a reduction in severity and risk of death for the Delta variant. Antivirals remain a key treatment in the resistance against future variants. Governments need to encourage pharmaceutical manufacturers to ramp up production and availability to ensure that there is sufficient stock against future, more severe variants. These can aid the strategy to reduce future vaccinations and release supplies for use in countries with very low vaccination rates.

It is unlikely that a new treatment will be developed for COVID-19 in the near term, but we could see existing therapies continue to be repurposed for symptomatic treatment. However, the pharmaceutical industry is likely to explore new delivery mechanisms for vaccines alongside the expected annual updated vaccine formulations.

On the whole, members of the insured population tend to be in better health than the general population as a result of improved access to healthcare. Healthier individuals are also a lot less likely to have co-morbidities that would place them in vulnerable groups. As such, these individuals are likely to continue to avail themselves of the benefits of vaccines by opting into annual vaccinations. Insurers will want to observe the uptake of vaccines in the population and draw their own conclusions on ongoing population risk. We should remain vigilant with ongoing vaccination uptake until we reach the endemic state (Figure 3). 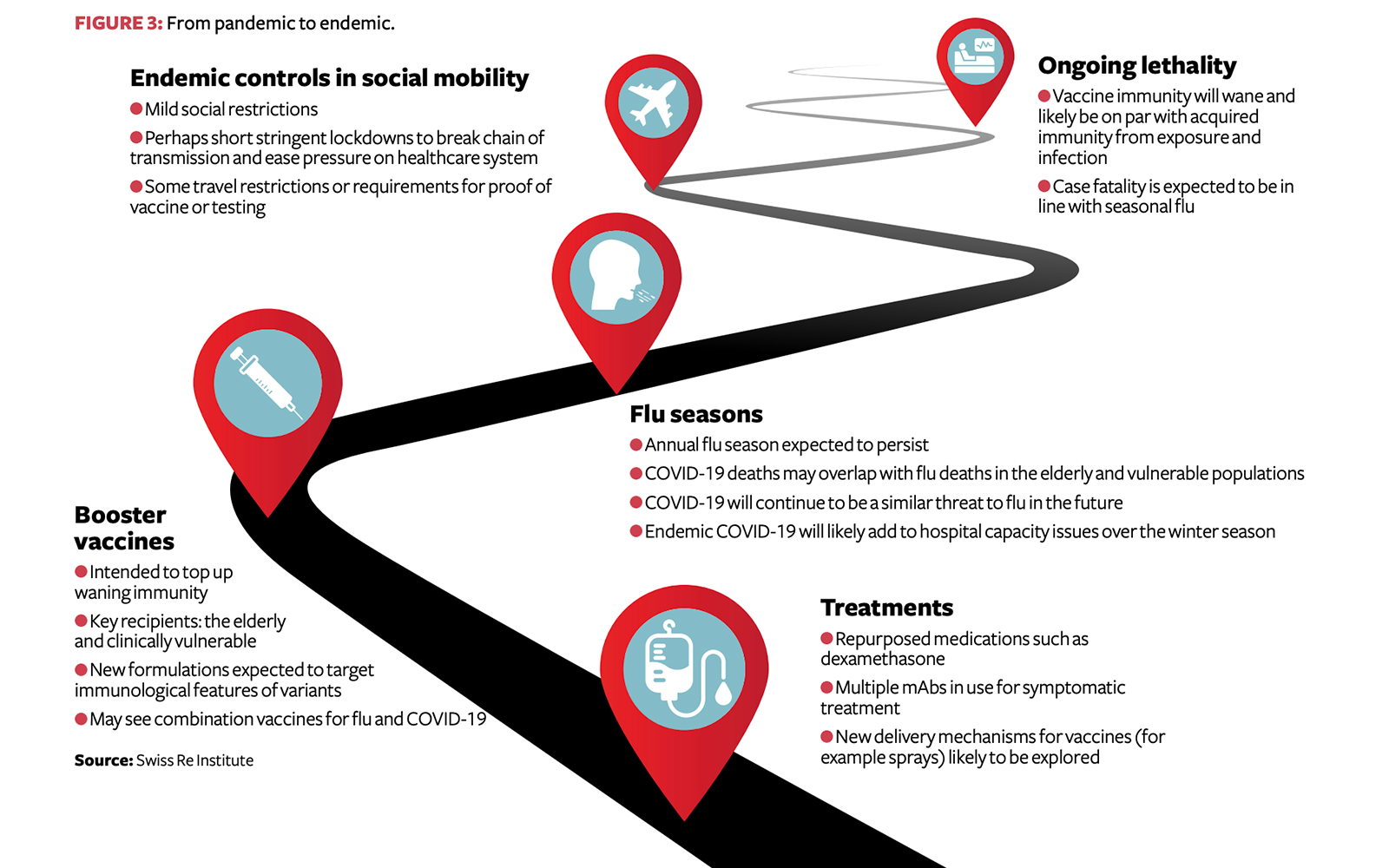 This article appeared in our April 2022 issue of The Actuary.
Click here to view this issue
Also filed in
General Features
Topics
Health care
Life insurance