The climate scenario modelling ecosystem has changed considerably during the past five years. As Task Force on Climate-Related Financial Disclosures (TCFD) guidance becomes more widely adopted, and in places mandatory, now may be a good point to consider whether the models used so far remain appropriate, or whether there are more suitable alternatives.

The TCFD guidance was first published in 2016 and 2017 and set out recommendations for more effective climate-related disclosures. In 2017, climate scenario modelling was a nascent field, with a few early movers looking to adopt the guidance, and a small field of start-ups and progressive established data providers.

At the time, Russ Bowdrey was involved in a major international insurer’s TCFD project and recognised the need to leverage any established modelling or data and to be realistic. His team’s aim was to build a ‘good enough’ picture of the risks and opportunities as robustly and pragmatically as possible, recognising the shortcomings in their approach. The article ‘Clarity on Climate’ (bit.ly/ClarityOnClimate), published in the May 2020 issue of The Actuary, expands on this experience and discusses some of the use cases.

An overview of climate scenario models

Asset owners and managers (such as insurers or pension schemes) use climate scenario models to understand how climate change and attempts to mitigate it will affect their balance sheets (Figure 1). Climate model results support decision making, risk management and disclosures. An effective climate model should incorporate realistic and plausible dynamics, so that impacts at economy and asset level are consistent and explainable.

This complexity typically lends itself to ensemble models; trying to tackle all aspects in one model would make that model too large and cumbersome to develop, check and maintain. Instead, we typically use models that are well suited to each stage. The most pivotal is arguably the model layer that translates climate impacts and policies into economic impacts – the ‘economic translation layer’ (ETL).

What is driving your climate model?

GEMs are currently more widely used in ETLs’ underlying climate models – a range of GEMs underly the Network for Greening the Financial System’s  (NGFS) climate model. Their popularity is partly attributable to familiarity. Equilibrium models are associated with neoclassical economics, which is the current mainstream economic thinking – so most economists are trained in this framework and understand its logic.

Non-equilibrium models arose in the 1960s; the world was in a state of transition, and macroeconometric models were better equipped to capture this. However, their development outstripped the computing power available at the time, and difficulties with parameterisation and calibration sometimes led to counterintuitive or hard-to-explain outputs. These challenges undermined confidence in non-equilibrium models, and the end result was that research effort (and funding) went to more traditional equilibrium models, which in turn became established.

However, non-equilibrium models are increasingly being reconsidered and adopted, especially in fields that require projections for non-equilibrium phenomena, such as the low-carbon transition, where the continuation of trends does not move towards a long-term optimum.

What differentiates GEMs and non-equilibrium models?

Equilibrium models are based on neoclassical microeconomic assumptions and consider the interaction of multiple rational agents that optimise their behaviour, resulting in a general market equilibrium. By contrast, E3ME – a non-equilibrium model built and maintained by Cambridge Econometrics – does not assume optimising behaviour or full use of resources, and allow for real-world inefficiencies such as involuntary unemployment. Figure 2 summarises the key differences between the models. 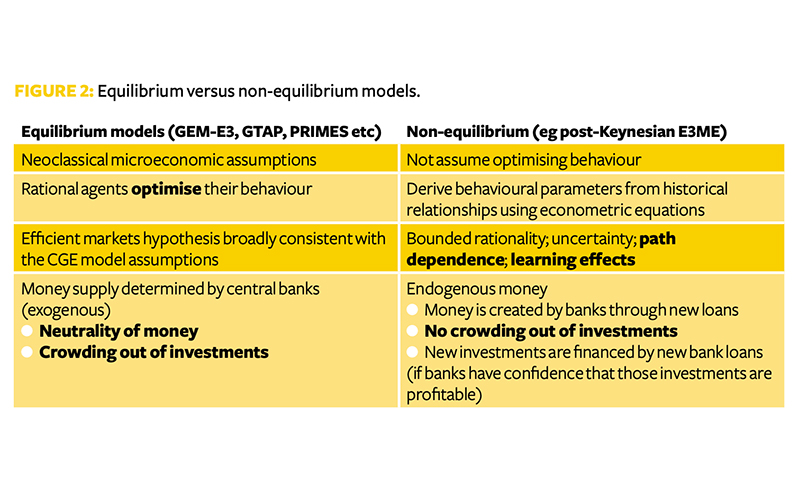 This follows from investment not being constrained by savings, which is a key tenet of GEMs. Figure 3 shows various illustrative pathways for each model. 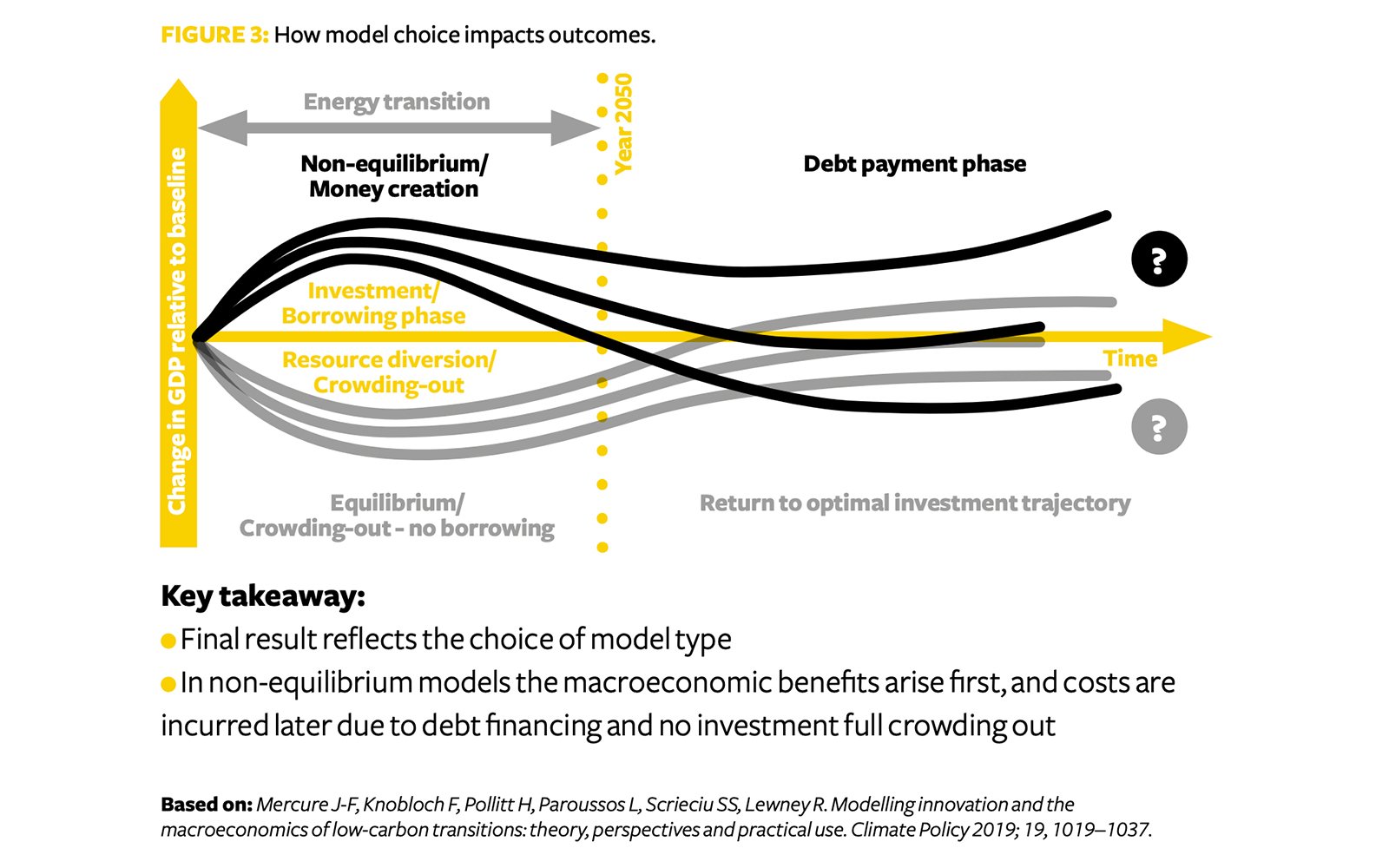 The adverse economic impact of the transition in equilibrium models intuitively makes sense because it is assumed that real assets are used in an optimal way, so any regulatory enforcement will divert the economy from its competitive optimum. In practice, there are often idle resources in the economy, as well as market failures due to institutional constraints, uncertainties or externalities. Under such circumstances, additional green investments triggered by regulatory intervention can push the economy towards fuller use of existing assets in the short term, and extend the required assets through new investments in the long term. Non-equilibrium models aim to capture these real-world behaviours and relationships. As a result, the outcomes of each type of model can be fundamentally different in direction and magnitude.

Bounded rationality and the advantages of abandoning optimality

A final element of non-equilibrium models worth exploring further is that they explicitly do not assume optimising behaviour. To understand how economies adapt to changes, we need a mechanism to capture how climate impacts, mitigation policies and technology adoption will support the green transition. An advantage of non-equilibrium models is that the transition can be implemented in a way that arguably better reflects real-world decision making (for example satisficing, bounded rationality and imperfect information).

For instance, E3ME – a non-equilibrium model built and maintained by Cambridge Econometrics – uses an evolutionary innovation model to capture the diffusion of the technology used to support the green transition. This approach gives more flexibility to reflect typical uptake and adoption of technology (from early adopters to laggards) and how that uptake responds to influences from regulation and interactions with other sectors and global economies. This last point becomes particularly important when translating the impact to assets, such as the equity investments in different sectors and regions around the world as part of a portfolio-level climate scenario analysis.

All models are wrong, and some are useful, but it is important to consider whether the model you are using is appropriate for your purpose. This decision should be considered carefully when choosing a modelling suite for climate scenarios.

On the one hand, the NGFS scenarios (based on the three GEMs) provide much-needed standardisation, which supports wide adoption and comparable disclosures. On the other hand, if the use case is investment decision making based on climate scenario analysis, it is vital that model users fully appreciate what the clockwork inside their models is capable of emulating in the real world.

Russ and János would like to thank Zsófi Kőműves and An Vu of Cambridge Econometrics for their contribution to this article.

János Hidi is a sustainable investment manager at Cambridge Econometrics

This article appeared in our March 2022 issue of The Actuary.
Click here to view this issue
Filed in
General Features
Topics
Investment
Environment
Modelling/software