What will the FCA's price walking rules mean for the UK insurance industry? 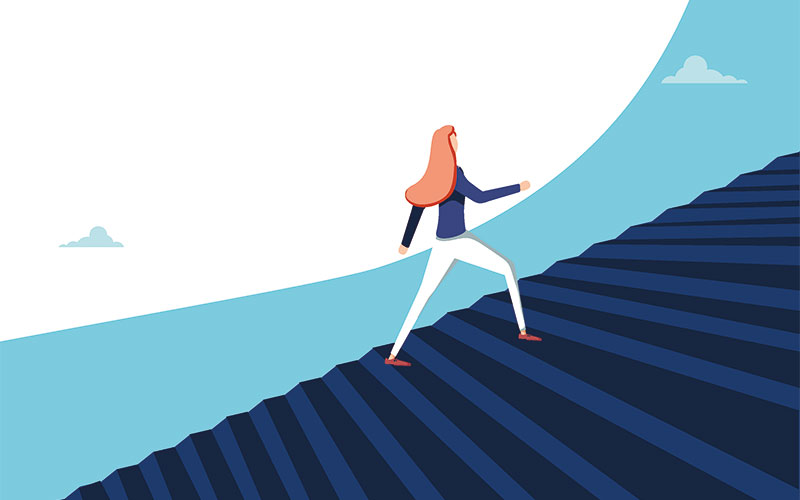 Price walking is when a company continually increases prices on renewal for loyal customers. As a result, long-term customers pay ever-increasing margins that end up being higher than those paid by newer customers. Price walking may also sometimes be accompanied by some form of unscrupulous behaviour – insurers might make it difficult for customers to decline a renewal, or to find out what price they would be offered if they were a new customer.

As margins continually increase, the most loyal customers are the most disadvantaged – something confirmed by the Financial Conduct Authority’s (FCA) in-depth study of the UK market.

The impact of price walking

Some people consider price walking the natural consequence of a competitive market, and there is good reason to believe that this is the case – particularly in hyper-competitive commoditised markets such as UK car and home insurance. When companies are forced to, or choose to, compete on price, and they sell products that have some form of repetitive future element, it is natural to offer the lowest possible initial price; future repeat business should, on average, at least cover the cost of customer acquisition and initial incentives such as discounts.

Over time, many companies will find that they must adopt this behaviour to attract customers in the main part of the market. In the most commoditised segments of the market it becomes the dominant, and possibly only, pricing strategy. Offering a price that is higher than the competition’s at new business, for what is generally a similar product, will not generate sales, so companies seek ways to lower and lower the new business price in order to gain customers. To generate margins, they become reliant on the customers who stay with them and renew at higher prices.

Conversely, this could be good for customers who are willing and able to shop around each year, as they are likely saving money year after year by getting the absolute best deals they can.

The FCA’s study found that six million policyholders paid prices that were more than 50% above the average of a cohort with similar risk characteristics. There was a reasonable correlation between higher prices and how many times a customer renewed with the same provider. The excess amount above the average paid by these consumers totalled £1.2bn.

Other countries have come to similar conclusions and taken steps to improve customer outcomes (Table 1). Common regulatory strategies include:

The FCA has brought in rules to deal with price walking that have not been tried anywhere else. Of particular interest to actuaries are the Pricing Remedy and the Reporting Remedy. 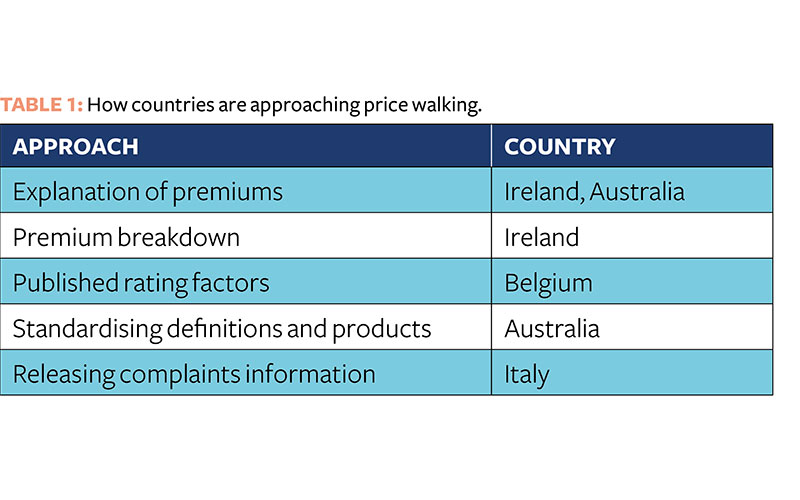 The Pricing Remedy, which came into effect on 1 January 2022, means renewal prices cannot be higher than new business prices (they can be lower). The FCA also requires an annual attestation from all firms involved in setting prices for consumer motor and household insurance. At each attestation, a company leader must state adherence to these rules personally. The leader needs to be a senior member of the organisation, for example the chief executive or chief underwriting officer.

The Reporting Remedy requires motor and household insurers and intermediaries to submit annual reports to the FCA, showing customer outcome metrics by tenure. This is the most granular regular reporting ever required by the FCA directly on customer outcomes in general insurance. On the surface it appears the reports should be of items that are already being monitored, but firms are likely to have to build new reports because the FCA requires items to be assessed in novel and uncommon ways.

The first report needs to be submitted to the FCA by 30 September 2022 and must cover the first six months that the new rules are in effect (1 January 2022 to 30 June 2022). After this, the reports will be for whole calendar years and must submitted by 31 March the following year.

The FCA has said that it will review the reports and attestations closely, and plans to work with firms to ensure compliance.

Will the remedies work?

The remedies and the FCA’s actions will cause firms to change their behaviour, and will make it extremely difficult for price walking to continue. We should expect that, when business decisions are made, thought will be given to their impact on the attestation and reports. Some firms may run off their business due to an inability to compete for new business, but there may also be new entrants, unencumbered by existing renewals.

The FCA is signalling a more interventionist approach to general insurance, especially in pricing, and in future it may be normal for pricing teams to need individuals with both pricing and compliance experience. The FCA may also roll out these reforms to other areas of general insurance, such as commercial business.

We should expect financial regulators in other countries and other industries to adopt similar approaches, especially those that are perceived to have similar issues with price walking.

Jeremy Keating is an underwriting data expert at errars.com

This article appeared in our January/February 2022 issue of The Actuary.
Click here to view this issue
Filed in
General Features
Topics
General Insurance
Regulation Standards