Taking shape: the Brownian blancmange’ fractal and how it can be used in hedging

Andrew Smith and Oliver Bentley share their ‘Brownian blancmange’ fractal, and how it can be used in hedging 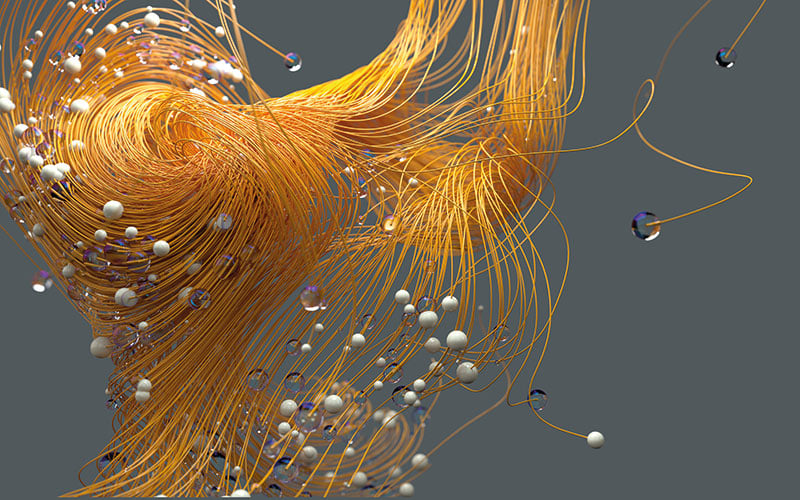 Brownian motion has many uses in actuarial work, but stochastic models based upon it can be complex and difficult to replicate. By their nature, Monte Carlo scenarios start from a common point but end in random places. We show how to construct paths that are similar to Brownian motion, using a deterministic method that is simple and easily replicated, and which has end points that a user can choose. Applications include the assessment of Value at Risk for dynamically hedged portfolios.

Dynamic hedging is a technique for reducing market risk exposure when an insurance product embeds financial options or guarantees. Firms rebalance their portfolios many times a year – perhaps monthly, weekly or daily. The high frequency of hedge trades sits uneasily in a regulatory capital regime that is based on a one-year horizon. Expressing stress tests over a one-year period requires assumptions about asset price paths within a year and hedging operations over smaller intervals.

The most important attributes of price paths in relation to hedging are well understood. The start point and end point matter, of course. In addition, a key determinant of hedge performance is the realised volatility of the underlying asset, as this affects the magnitude of typical hedge trades and the impact of the convexity (also called gamma) in option prices. We might, for example, wish to construct a path in which an equity market falls by 40% over a year, and in which the realised volatility is 30%.

Suppose an asset has log price x(t) for times 0≤t≤1, and let n be a positive integer. The realised volatility,  , of the log asset price is defined as the estimated standard deviation per unit time – that is:

We propose a new fractal curve, Brownian blancmange, for interpolating stress tests. It is Brownian because the fractal resembles a Brownian path, and it is blancmange because the fractal satisfies a self-similarity property which is similar to that defining Takagi’s blancmange fractal. Brownian blancmange is not stochastic and is zoomable, meaning it is easy to calculate points in any time order and at any resolution. This contrasts with Brownian motion and more general processes from economic scenario generators, which are simulated with increasing time and at a preset time spacing.

The idea is to start with a discrete random walk on the (n+1) time points t = 0, t = 1/n, t = 2/n ... t= 1. To keep unit variance per unit time, the steps in that random walk must be ±n-1/2 with equal probability. Our trick is to make Brownian blancmange a random walk path simultaneously for many different scales.

If we have a random walk with n steps, we might hope to break each step into two or three sub-intervals, consistent with a 2n-step or 3n-step random walk. Unfortunately, this fails, because there is no way to express one increment of n-1/2 from two increments of size ±(2n)-1/2. We can, however, decompose one step of size n-1/2 into one step of –(4n)-1/2 and three steps of +(4n)-1/2. Starting with n = 1, we can then develop a function that is a random walk path when n is any power of four. Figure 1 shows just one of eight good ways to refine the random walk paths, which we call Pattern 1A. For large n, the nested discrete random walks converge to a continuous path, which is Brownian blancmange. Figure 1 also highlights the division into 12 intervals, corresponding to hedging at monthly intervals.

While the Brownian blancmange path represents only a single scenario, it is representative of all random walk paths in the sense that it has a realised volatility of 1, for a range of values of n including whenever n is a power of two, or thrice a power of two. If we want, for example, to create log asset price paths with a realised volatility of 30%, we can take pattern 1A, multiply by 0.3 (or -0.3), then add a linear trend to fit the chosen start and end points. 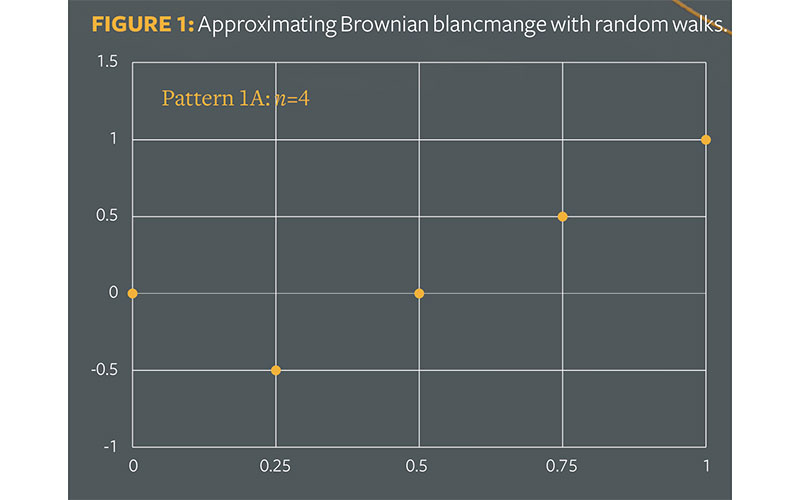 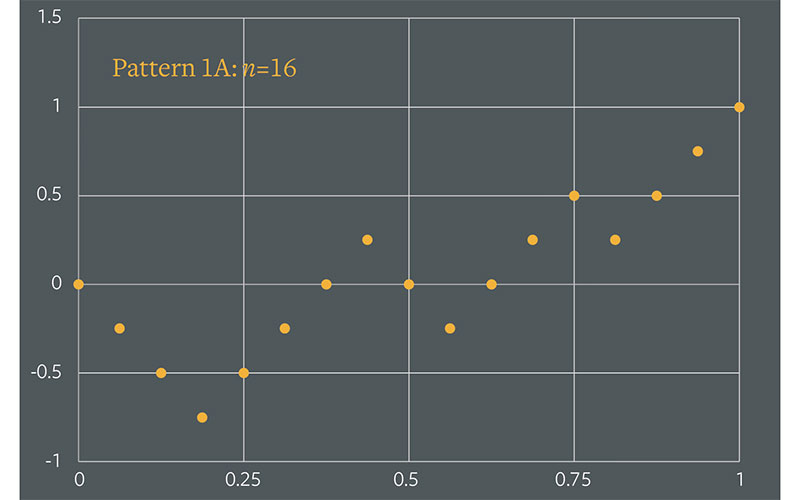 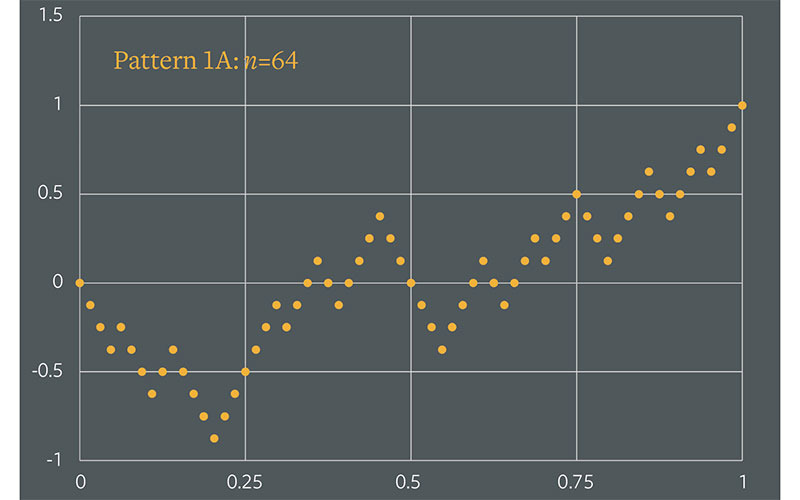 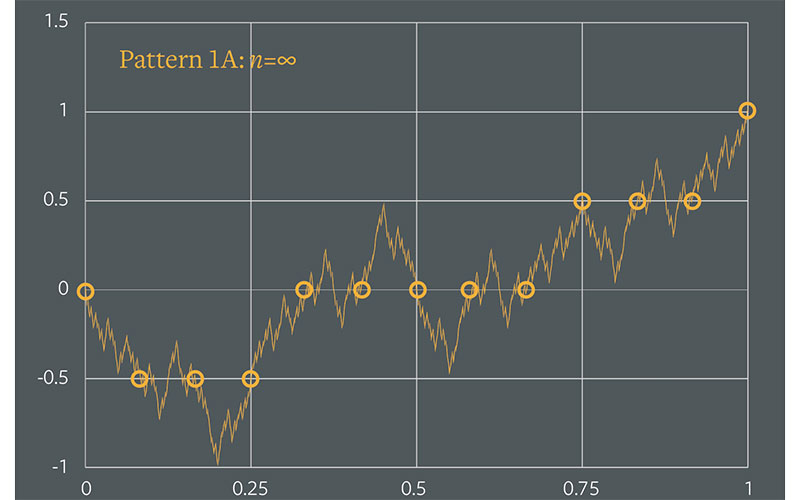 Brownian blancmange satisfies a self-similarity property, which we can exploit to create compact code. The following function in Visual Basic computes pattern 1A:

Function Blancmange1A(t As Double) As Double

Pattern 1A is one of eight Brownian blancmange patterns.

We label them 1A, 1B, 2A, 2B, 3A, 3B, 4A and 4B.The initial number indicates the quarter in which the fractal falls by ½, with rises of ½ in the other three quarters. The final letter describes the changes over the six periods of two months (A = two periods of no change, one -½ and three +½, while B = five periods of no change and one +1).

An Excel workbook illustrating all eight fractals and the Visual Basic for Applications code necessary to generate them can be found at github.com/AndrewDSmith8/Fractals-and-Hedging. With it, readers can easily confirm that the realised volatility is indeed 1 when n is a power of two or thrice a power of two.

Consider a firm writing a guarantee on an underlying asset whose initial value is 120, with a strike of 100 and a two-year term. The guarantee is delta-hedged four times a month – that is, 48 times during the year. To calculate the option value (and the delta), the firm uses an implied volatility of 20%. The hedge profit is the gain on the hedge over a one-year horizon, minus any increase in the option value according to the Black-Scholes formula.

While the realised volatility and the year-end price of the underlying asset are the most important drivers of hedging profit, the range of results between the 16 paths shows that other aspects of the paths also matter. The yellow curves correspond to price paths that spend most of their time during the year above the average of the start and end points – so in the case of low year-end values, these paths have spent more time near the strike, where the convexity is greatest, compared to the grey curves whose price paths spend longer below the strike. The yellow paths thus experience the most pronounced hedging losses in the event of a general fall in market levels. Pattern 1A generates a grey asset price path (when multiplied by 0.3) and a yellow path (when multiplied by -0.3). 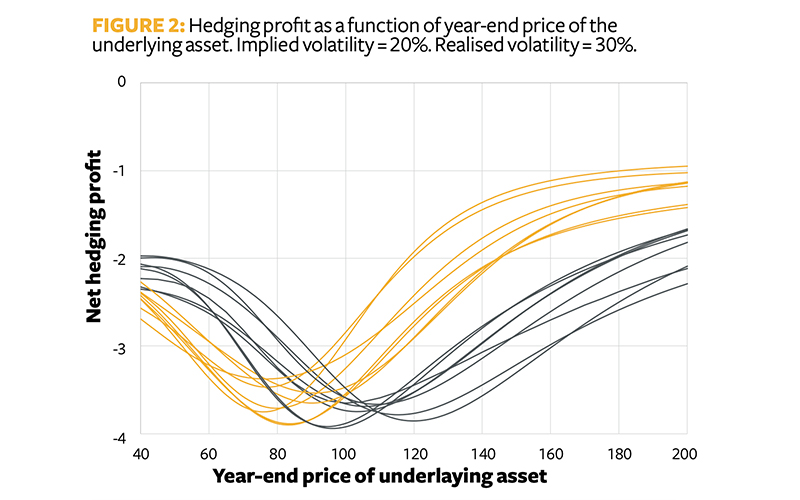 We have presented a process for generating deterministic fractal paths that mimic Brownian motion in some respects. We can control the end points and realised volatilities of those paths. Furthermore, the paths do not have to be calculated in increasing time sequence, allowing analysts flexibility and consistency across different hedging frequencies. We propose these as a tool for stress-testing strategies for dynamic hedging, including the calculation of associated capital requirements in relation to hedge failure.

The fractal approach may not be appropriate for all firms. For those where the dynamically hedged liabilities are a small part of a business, simpler approaches might suffice, such as an instant stress test combined with an assumed percentage hedge effectiveness. At the other extreme, for the most sophisticated firms, a focus on 16 deterministic paths may be too restrictive, and a full nested stochastic approach may be needed.

There is, however, a middle ground of firms that carry out some hedging, for whom explicit intra-year models are becoming important for evaluating alternative hedging approaches. A full nested stochastic model can be cumbersome and introduces further complexity, which may obscure the underlying profit drivers. For these firms, deterministic fractals can provide useful insight into hedging performance and stress test design, allowing investigation of typical and stressed paths without the need for more complex or expensive modelling tools.

Andrew Smith is an assistant professor at University College Dublin

This article appeared in our January/February 2022 issue of The Actuary.
Click here to view this issue
Filed in
General Features
Topics
Technology
Modelling/software