Mr Piyush Majmudar (pictured, on left, with Tan Suee Chieh) passed away on 4 November 2021, just short of 90 years old. He qualified as a Fellow of the Institute of Actuaries in 1968 , becoming part of the early generation of actuaries in India. 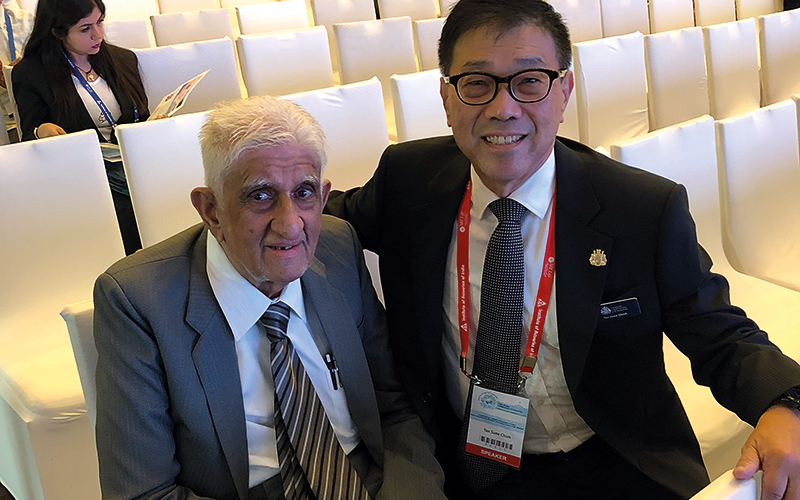 Piyush grew up in the Mumbai suburb of Santacruz. He lost his father at a young age and sought the help of a charitable trust to pursue his actuarial studies, qualifying at 36 after years of hard work and commitment.

Piyush’s early working life was with New India Assurance and then JB Boda in Mumbai. His career and family fortunes changed for the better when he was seconded to Nairobi to work for Kenya Re. After that, Piyush joined the Commonwealth Fund for Technical Cooperation and became adviser to governments in Kenya, Mauritius, Barbados, Sri Lanka and St Lucia. He returned to Mumbai at the age of 65 and worked for 20 years with consulting firm KA Pandit – probably the happiest leg of his career.

Piyush specialised in general insurance and health, and also did life and gratuity work (retirement funding) later in his career. His love for the profession was second to none and he advised many young graduates to pursue actuarial careers, including his son Nishit.

Like most Indians, Piyush loved cricket and encouraged his sons to play it and other sports. He also loved music and spent hours listening to the songs of Mukesh. His greatest gift was his kindness and love for everyone around him, and at 6’2” he was always one of the tallest figures at actuarial conferences! He leaves behind his wife Avanti, sons Amit and Nishit, daughters Deval and Varsha, and two grandsons Saagar and Yash. On behalf of the IFoA and my family, I would like to express our condolences to them.

I also want to mark my respect for not just Piyush but the whole early generation of actuaries in India and Sri Lanka, including

HN Handa, Salunkhe, P Subhedar, the Rao brothers and BP Gupta. They greatly influenced Malaysian actuaries and myself, both directly and indirectly, and were the original pioneer generation of actuaries in the Commonwealth.

Mr Andrew Aldridge, based in the UK, gained Fellowship in 1988, died aged 62.

Mr Vincent Chambers, based in the UK, gained Fellowship in 1973, died aged 73.

Professor Joseph Kepper, an Affiliate based in Switzerland, died aged 89.

Mr Richard Shepherd, based in the UK, gained Fellowship in 1967, died aged 82.

Professor Andrew Cairns of Heriot-Watt University’s Department of Actuarial Mathematics and Statistics was recently awarded the Edinburgh Mathematical Society’s inaugural Impact Prize for 2021 for his work on modelling, measuring and managing longevity risk. The prize recognises the contribution of individuals, teams or partnerships whose work in pure mathematics, applied mathematics, mathematical physics or statistics has had an outstanding, demonstrable impact or influence in fields beyond the mathematical sciences. Cairns said: “A key driver behind my research is the potential for results to be taken up by industry. It is, therefore, a great pleasure for me to have this aspect of my work recognised.”

Gareth Mee will be CFO for Legal and General Capital from January. Mee is head of EY’s UK actuarial team and global head of investment advisory.

Best Trustees has appointed Andrew Campbell. Campbell has been a pension trustee since 2017.

Hymans Robertson has appointed Claire O’Neill to its risk transfer team. She joins from Mercer, where she reduced DB pension scheme risk.

We would be delighted to hear from you.If you have any newsworthy items for these pages, please contact us at: [email protected]

This article appeared in our December 2021 issue of The Actuary.
Click here to view this issue
Filed in:
People & Social News