Cutting the bias: Modelling the impact of Covid-19 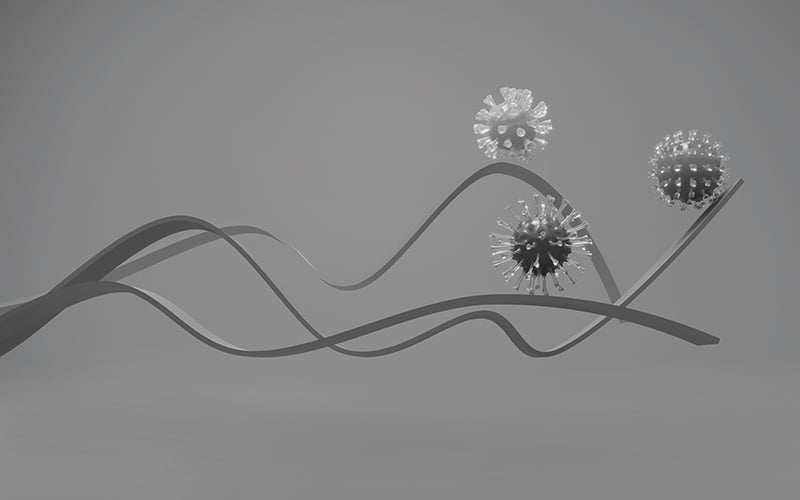 The ongoing COVID-19 pandemic has produced two mortality shocks in the UK and other countries. Figure 1 shows daily deaths in the UK mentioning COVID-19 on the death certificate, showing two sharp spikes in 2020 and 2021.

To put these deaths into context, Figure 2 shows the weekly post-retirement age deaths registered in England and Wales between January 2015 and December 2020. A strong and consistent seasonal pattern is evident, as is the first COVID-19 shock of April and May 2020, which increased the death count by around two-thirds beyond what might ordinarily have been expected. One lesson we can learn from Figure 1 and Figure 2 is that we sometimes need to model mortality over periods of much shorter than a year. Annual mortality rates cannot do justice to the rich detail exhibited by mortality patterns in time, or come close to capturing the intensity of a mortality shock that lasts a couple of months. 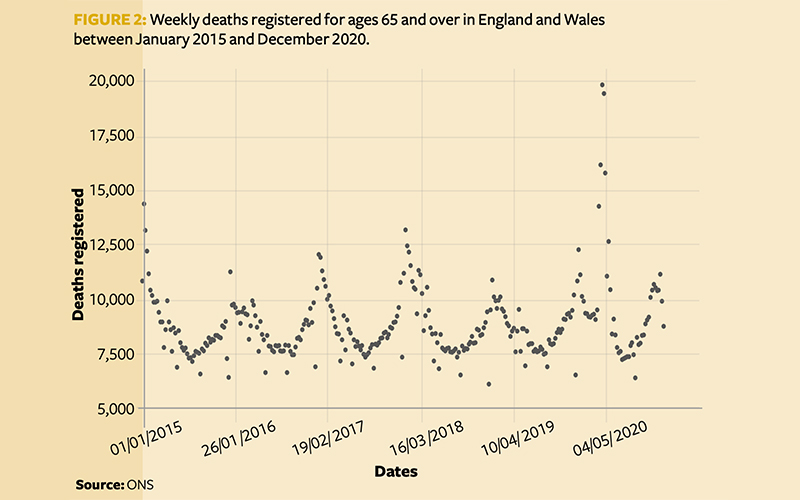 A challenge for actuaries

Figure 3 shows that the extra mortality of COVID-19 affects annuity portfolios, with the first mortality shock peaking in the first week of April 2020. It uses a simple moving average based on the number of annuities in-force at the start of each day and the number of deaths on that date. 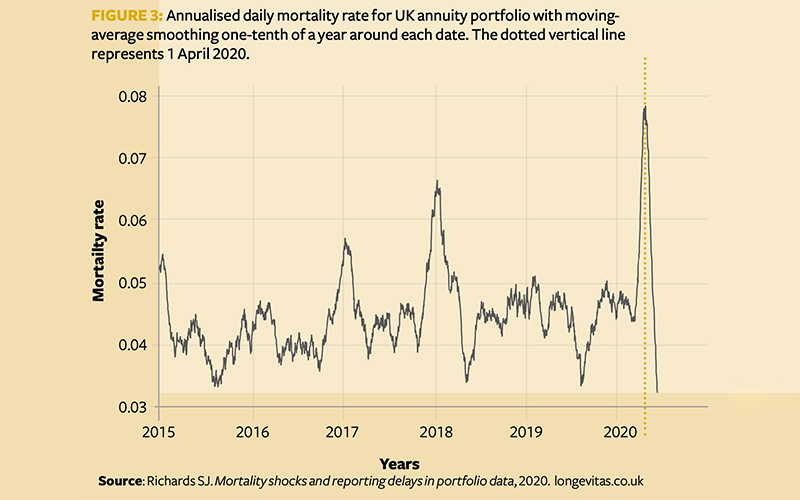 However, mortality spikes such as those in Figure 3 create a challenge for actuaries – how do you model a portfolio’s mortality experience when the period covered includes one or more pandemic shocks?

Actuaries analyse recent experience data to set a best-estimate basis (future trends or improvements are usually handled as a separate item). However, the presence of a mortality shock creates a risk of upward bias (unless you want to assume that such mortality shocks will regularly re-occur). This bias is a particular problem when pricing bulk annuities and longevity swaps – unless the (re)insurer allows for the upward bias in the pension scheme’s mortality data, it under-prices the risk and may make less profit than intended. 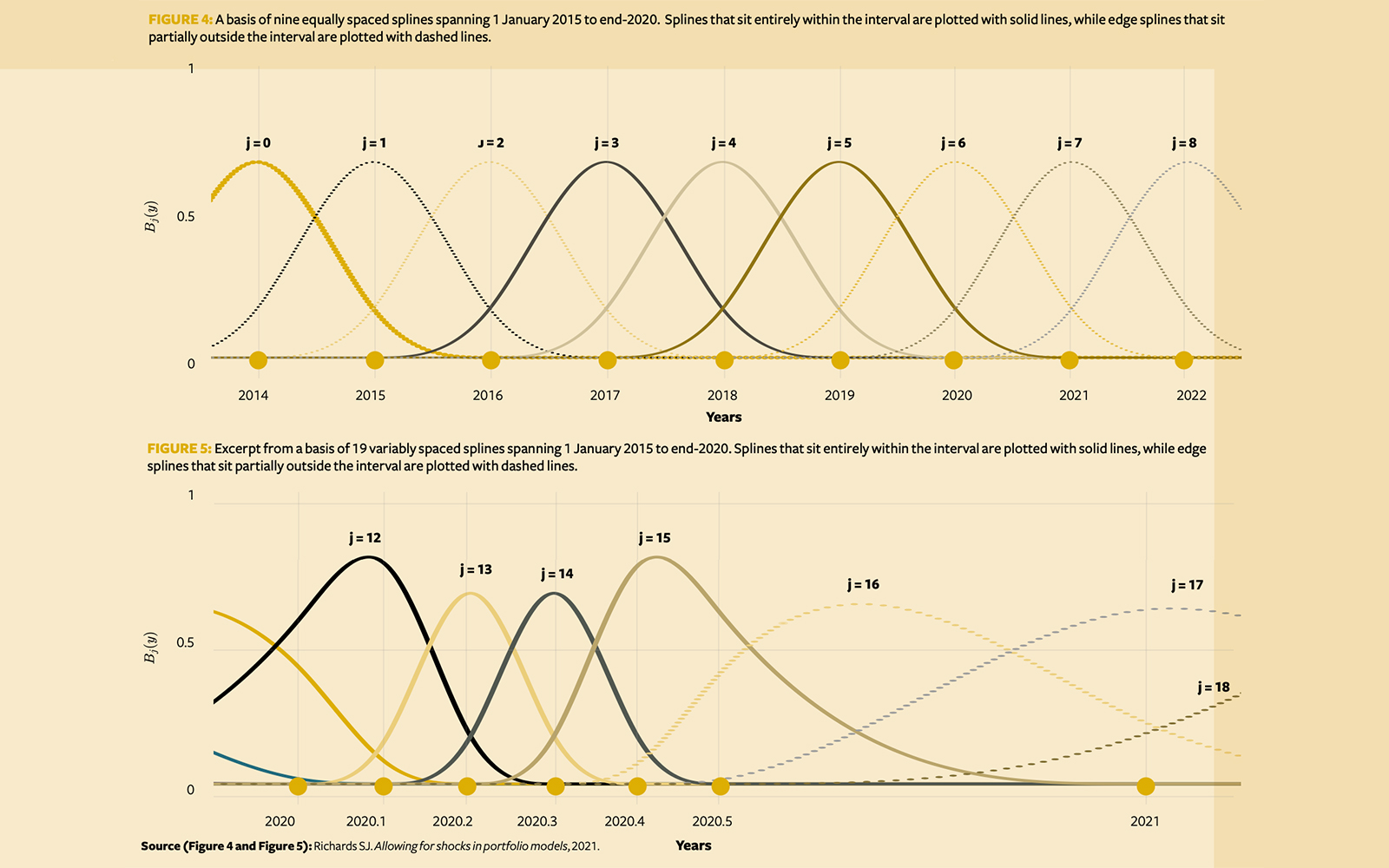 One idea might be to remove all deaths that mention COVID-19 on the death certificate.  However, pension schemes and annuity portfolios rarely record cause of death, so this cannot be a general solution. Another idea might be to ignore the main periods of COVID-19-affected mortality. However, this has two drawbacks. The first is that pension schemes often only have three to five years of experience data, so discarding some of that data is an unaffordable luxury. The second drawback is that the mortality shocks occur at focused points in the year. Since mortality has a pronounced seasonal pattern, as shown in Figure 2, ignoring periods of pandemic mortality would lead to unbalanced seasonal contributions. This would create a new source of bias to replace the bias we were trying to eliminate in the first place.

A flexible model in time

A better solution is to use all available data, but for the mortality model to handle sharp fluctuations in time to avoid biasing other parameters. It is essential that the model doesn’t require any new data fields beyond what is usually available in administration systems. One approach is the following model for the mortality hazard,

is the age-varying mortality hazard, including covariates such as gender, annuity amount and any other risk factors the actuary wishes to include. The right-hand summation term is for the mortality level in time:

is the jth B-spline evaluated at time y, and

is the coefficient of

. Figure 4 shows an example B-spline basis with a one-year gap between knot points.

However, we obviously need closer knot spacing for modelling shocks that take place over the course of a couple of months. We further note that there is no requirement for knot points to be equally spaced. This means we can add knots only where greater flexibility is needed – for example around the time of a known mortality shock. Figure 5 shows part of an alternative basis of B-splines with a half-year gap between knots (to capture seasonal variation), plus additional knots around the time of the first COVID-19 shock in the UK in April and May 2020.

The model in Equation 1 fits a continuous age-period model, meaning the time component of mortality is independent of age (although the estimates of

are obviously influenced by the age range of the data used to calibrate the model).

One important practical aspect of Equation 1 is that we set

as an identifiability constraint. This does not affect the overall model fit, but we can use alternative identifiability constraints to improve interpretation. Specifically, we can re-normalise the parameters at a point in time when mortality levels were unaffected by COVID-19. One such point would be October 2019 – the midway point between the last summer trough and winter peak before the first COVID-19 shock. Figure 6 shows the results of fitting the model in Equation 1 to a portfolio of UK annuitants, where the purely age-related mortality,

accounts for variation by age, gender and annuity amount. Figure 6 is essentially a smoothed version of Figure 3, but with the advantage of allowing for various other risk factors.

For analytical purposes, we set a reference mortality level of 1 midway between the summer trough of 2019 and the winter peak of January 2020; this doesn’t change the fitted model, but does help with the interpretation of it. Figure 6 shows that the model in Equation 1 can identify a rich variety of mortality patterns in time, including the seasonal variation during the period 2015–2019 and the first COVID-19 mortality shock that took place in April and May 2020.

The most striking aspect we see is the near doubling of the mortality hazard during the mortality shock compared to the reference level. Another feature is the extent of the trough-to-peak seasonal variation, with winter mortality levels that are up to 30% higher than summer mortality dips. A third aspect is the suggestion of an unusually deep summer trough in 2020; this could be a result of the deaths of the frail having been brought forward during the mortality shock (a phenomenon known as ‘harvesting’), or else a result of healthier behaviours of a socially distanced population under lockdown – or, perhaps, both.

There are strong parallels between Figure 2 and Figure 6: both show pronounced and regular seasonal variation and a dramatic spike in mortality in April and May 2020.  The difference is that Figure 6 is the mortality level after allowing for exact age, gender and annuity-size differentials, and is customised for the portfolio. Since the model can accommodate intense short-term mortality shocks, the remaining parameters will not be biased towards a higher level of mortality.

The utility of Figure 6 extends further, as the model can also be used to estimate a portfolio-specific rate of mortality improvement for the pre-COVID-19 period. We can compare the mortality levels at any two points, and the most stable periods tend to be the summer troughs (winter peaks are more variable). If we compare the mortality levels of summer 2015 and summer 2019, we find the portfolio has experienced an aggregate annual mortality improvement of 1.2% per annum. This sort of insight is particularly useful for transactions such as bulk annuities and longevity swaps, as it allows the (re)insurer to see if the portfolio has experienced faster or slower improvements and price accordingly.

The usefulness of Figure 6 to the actuary is evident: with a clear picture of mortality levels in continuous time, we can be sure that the other parameters in the model are not biased by mortality shocks or seasonal variation. Setting a best-estimate basis is then a question of deciding what time-point represents a suitable level for the purpose at hand, such as setting a pricing basis for a bulk annuity or a longevity swap. This is a matter of actuarial judgment, but one that will be informed by the detailed insights from Figure 6.

This article appeared in our December 2021 issue of The Actuary.
Click here to view this issue
Filed in:
General Features
Topics:
General Insurance
Life insurance
Modelling/software