As their populations age, developing countries will face issues over the sustainability and adequacy of their pensions, says Seda Peksevim 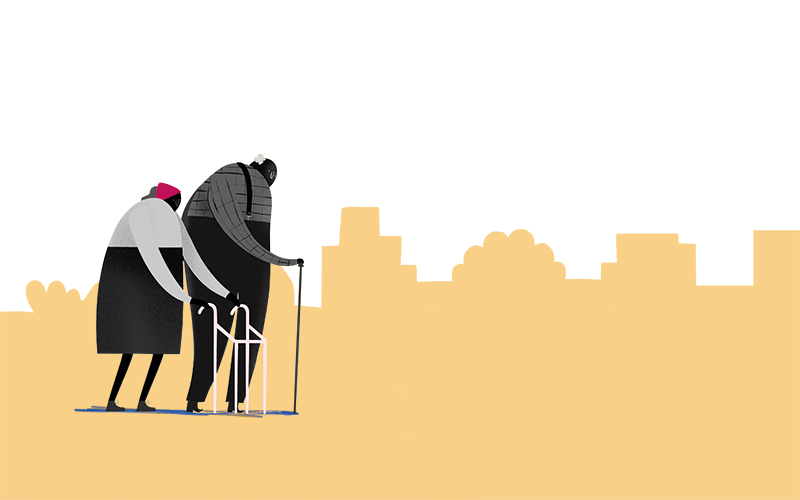 While nearly every country in the world will see their populations age in the coming decades, this trend will be most pronounced in developing countries, which are expected to have acquired a similar age profile to developed countries within 25 years – an ageing process that, in developed countries, took place over 150 years.

One of the most severe impacts of this rapid ageing of the population will be on the sustainability and adequacy of public (state) pension systems. Since state pensions are primarily established to provide an old-age income for the poorest in society, their healthy functioning is particularly critical for developing countries, where the poverty rate is twice as high as in developed ones and unfunded state pension plans account for about 85% of retirement benefits among the lowest-income groups.

Pensions sustainability can initially be defined as whether a country can finance its state pension payments using workers’ contributions, so as to preserve the fiscal balance of public spending. With the rapidly ageing populations in developing countries, pension payments will inevitably exceed workers’ contributions over time; ensuring sustainability will mean putting a strain on wider resources.

“Pensions sustainability concerns could be addressed by raising the retirement age or reducing state pension benefits, but that would impact pensions adequacy”

This is illustrated in Figure 1, which shows that, on average, state pension expenditure is expected to rise from 6.7% to 8.1% of GDP across 21 developing countries. This is a faster increase than the projected average rise from 8.8% to 9.4% for OECD countries, reflecting the more rapid ageing process in developing countries.

Current and projected levels of state pension spending are relatively high in most Central Eastern European (CEE) countries, such as Estonia, Poland, Latvia, Lithuania and Croatia. The largest growth is expected in Korea and China (where it is projected to more than double) and Brazil (where it is forecasted to rise from 9.1% to 16.8%). State pension expenditure accounts for around 20% of the total government spending in developing countries, and will account for more than 3% of Brazil and Slovenia’s fiscal deficits by 2050.

India, Indonesia and South Africa have low current and projected state pension expenditure due to their limited coverage rates. In Latin America, a projected fall in expenditure in Chile and a slight increase in Mexico can be explained by the fully funded nature of their main pension arrangements, with only modest levels of unfunded state benefits. 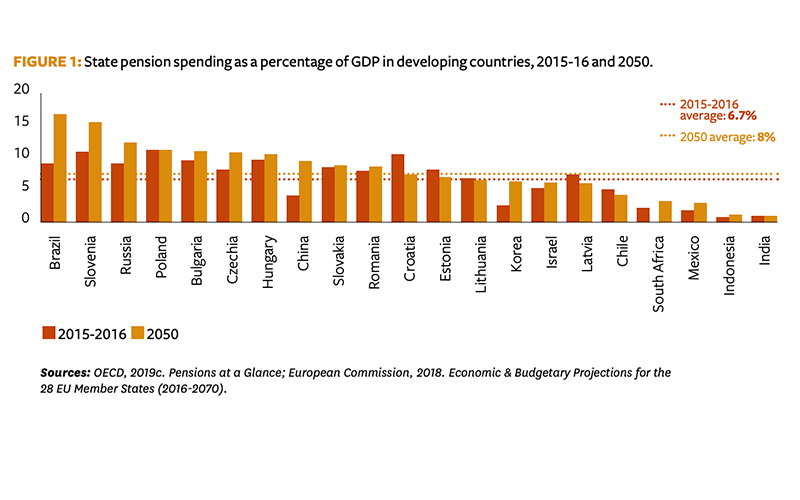 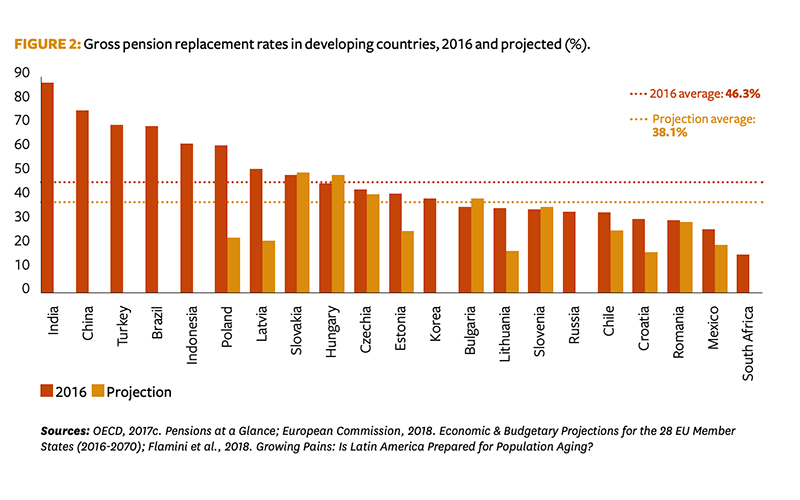 Adequacy refers to the ability of state pensions to provide sufficient income to meet retirees’ needs. Gross replacement rates (GRRs) are a commonly used measure of adequacy, defined as the ratio of pension benefits to pre-retirement income.

Figure 2 shows that, on average, GRR in 21 developing countries is expected to decline from 46.3% in 2016 to 38.1% for projections in 2065-70. While India, China, Turkey, Brazil and Indonesia have the highest GRRs, most of the countries have expected levels below 40% – the threshold recommended by the International Labour Organization to protect retirees from old-age poverty.

A major GRR decline is observed in CEE countries, and while Korea will experience considerable growth in its state pension expenditure, its projected GRR is uncertain. Latin American countries expect a decline in GRR due to the introduction of less generous minimum pensions for younger workers.

Pensions sustainability concerns could be addressed by raising the retirement age or reducing state pension benefits, but that would impact pensions adequacy. There are also other potential policy issues.

Public pension reserve funds (PPRFs), established by governments to reduce the financing gap in unfunded plans, could help to reduce the fiscal deficit of state pensions. However, while the total assets of PPRFs in some OECD countries almost doubled between 2007 and 2017, increasing from US$4trn to US$7.5trn, in developing countries their importance relative to the economy is still small, as the ratio of assets to GDP is less than 5%.

Encouraging funded private sector pension provision could help both sustainability and adequacy. In this regard, an interesting development took place in the late 1990s and 2000s, when many Latin American and CEE countries fully or partially privatised state pensions via a transfer to funded defined contribution (DC) pensions. However, following the 2008 financial crisis, a number of CEE countries reversed this process to boost their fiscal positions, transferring DC assets back to the state.

Another important initiative may be notional defined contribution (NDC) plans, in which participants have individual accounts that reflect the level of contributions attributable to them, but there are no underlying assets – an unfunded arrangement. The government decides the rate of return on contributions. This gives the country more control, and the return can be linked to economic performance. NDC plans have lower administration costs than unfunded defined benefit plans due to the simple recordkeeping of pension accounts. In this respect, NDC plans may be particularly advantageous for developing countries that do not want to replace existing unfunded arrangements with funded DC plans due to the high transition costs.

State pension reforms that reduce or maintain public expenditure in future will be at the expense of cutting benefits for future generations – but countries that pursue a policy of minimal sacrifice to adequacy will be challenged by fiscal sustainability. Developing countries must seek the right balance between sustainability and adequacy in their systems in light of their ageing populations.

Seda Peksevim is a pension researcher at Bogaziçi University, Istanbul and founder and principal of the research company Pensión

This article appeared in our November 2021 issue of The Actuary.
Click here to view this issue
Also filed in:
General Features
Topics:
Investment
Pensions